Choppier Waters Ahead in the South China Sea? 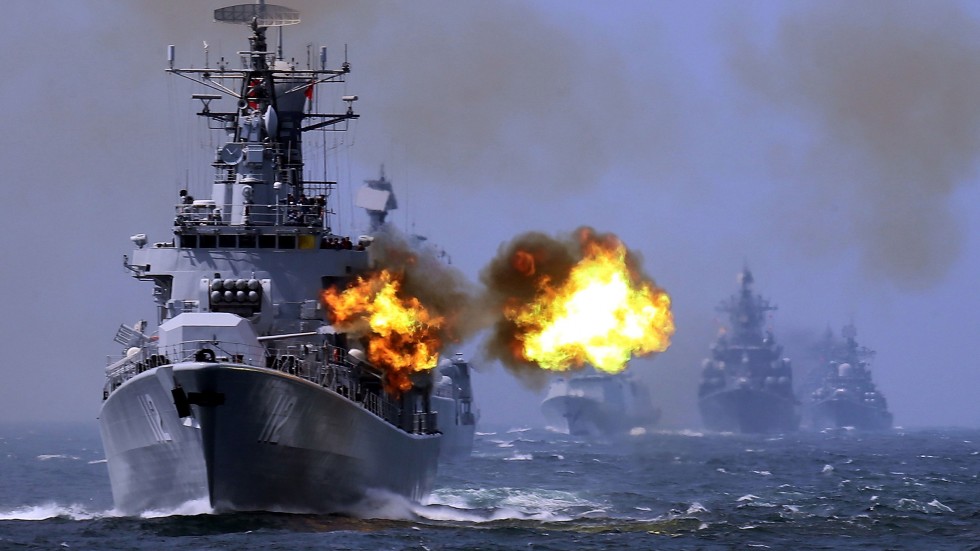 China's Harbin guided missile destroyer is shown during a joint naval exercise with long-term ally Russia in the East China Sea in May. Now China is welcoming similar moves with Asean nations in the South China Sea. Photo: SCMP Pictures
For the past 12 months, the waters of the South China Sea have been fairly tranquil, at least compared to the turbulent squalls that have raged on and off there since the late 2000s. There have been no major incidents or crises, and even one or two relatively good news stories concerning cooperation among the various claimants have emerged.

However, long-time, and hence jaded, observers of one of Asia’s most intractable disputes understand the cyclical nature of tensions; and also know that given the unchanging central drivers of the conflict and the absence of collective political will to palliate those drivers and negotiate an equitable solution, periods of calm are invariably followed by strong tempests.

A year after the Arbitral Tribunal at The Hague issued its historic ruling, it is instructive to review the causes of this rare respite and ask ourselves whether anything has really changed and whether the lull can continue.

There are at minimum four possible explanations for the ebb in tensions from mid-2016 until now.

First and foremost is the improvement in relations between the Philippines and China. After the Tribunal issued its award on 12 July 2016—a ruling that was overwhelmingly in favour of the Philippines—newly installed Philippine President Rodrigo Duterte tossed it to one side and did what China and the other claimants had always wanted it to do: discuss the issue bilaterally with Beijing (thus marginalizing ASEAN, something which the Philippines has been able to do as Chair of the ten-member organization in 2017)  and explore the tantalizing (though hard to realize) prospect of joint development, a Chinese mantra since the days of paramount leader Deng Xiaoping.

In return for playing the South China Sea game by China’s preferred rules, Beijing showered Duterte with fulsome praise and promised to pump billions of dollars into the Philippines’ creaking infrastructure. Moreover, not only did China not—as many had expected—start reclamation work at Scarborough Shoal, it actually lifted a four-year blockade of the Shoal, a policy which had prevented Filipino fishermen from operating at the reef (which the Tribunal ruling said they had the right to do).

As a result of Duterte’s change in approach to the dispute, the atmospherics of Sino-Philippine relations haven’t been this positive since the mid-2000s when then Presidents Gloria Macapagal Arroyo and Hu Jintao declared a “Golden Age” in which, it was held, booming and lucrative economic synergies would reduce their maritime disputes to a negligible irritation—that is before the Chinese investment projects collapsed due to corruption allegations and a joint maritime survey project (with Vietnam) in the South China Sea was declared unconstitutional in the Philippines and quickly sank without a trace.

The second reason for the lull in tensions has been inaction by the United States in the South China Sea in the latter stages of the Obama administration and the first few months of the Trump Presidency. The last major action by the U.S. in the South China Sea under Obama was a U.S. Navy freedom of navigation operation (FONOP) in October 2016. After Donald Trump was elected to the White House in November, the new administration’s approach to China looked uncertain. Indeed, the pendulum of U.S.-China relations  has swung to the extremes. Initially, Southeast Asian countries feared that Trump would adopt a hawkish posture towards China over trade, Taiwan and the South China Sea, and that the resulting tensions would spill over into the region. During his confirmation hearings, Secretary of State designate Rex Tillerson even implied that the U.S. might try and deny China access to its artificial islands in the Spratlys. After the blossoming of the Trump-Xi bromance at Mar-a-Lago, the pendulum swung to the other side, and Southeast Asians wondered whether Trump would look the other way on the South China Sea in return for Beijing tightening the screws on North Korea. The White House, it was revealed, had refused to give the green light to Pacific Command’s request to conduct further FONOPs.

A third reason was China’s economic “charm offensive”, the centrepiece of which is Xi’s “One Belt, One Road” initiative in which Southeast Asian countries have been offered ground floor access and all the attendant riches that China has promised will flow from its pan-continental economic connectivity plan—that is, as  long as, they don’t challenge China’s expansive maritime claims.

A fourth possible explanation of the decline in tensions is that Beijing has had its hands full with the North Korean crisis, and doesn’t want an additional crisis in the South China Sea in the run-up to the all-important 19th Party Congress scheduled for autumn.

A symptom of ebbing tensions in the South China Sea was the agreement reached by ASEAN and China in May 2017 on a draft framework for a Code of Conduct (CoC), the Holy Grail of a two-decade long conflict management process.

The answer to both questions is no.

China undoubtedly scored an important victory by getting—through a combination of economic blandishments and thinly veiled threats—the Southeast Asian claimants to downplay the Tribunal’s ruling. But the award is now part of maritime case law, and Southeast Asian lawyers have thoroughly absorbed its contents and concluded that it only strengthens their jurisdictional claims. It remains in their legal back pocket so to speak, to be pulled out and used if and when it is needed.

None of the Southeast Asian claimants have changed  their claims, or the basis of those claims, to the various the features or maritime zones in the South China Sea. President Duterte may say one thing or another about the South China Sea—ranging from strident nationalism to fatalism in the face of growing Chinese power—but the Philippines’ national security establishment is determined to uphold the country’s claims in the “West Philippines Sea” and remains vigilant, despite limited resources. And irrespective of Duterte’s pledge to “separate” from America and pursue alliance-like relationships with China and Russia, the United States remains the Philippines’ indispensable security partner, as the violent siege at Marawi in Mindanao attests.

If China has really “won” in the South China Sea, shouldn’t we expect the Southeast Asian claimants to show deference to the nine-dash line? And yet, Malaysia recently rejected it as being incompatible with international law, as has Indonesia—which has held a series of high-profile military exercises around the Natuna Islands to underscore its rejection of Chinese claims in the area—and, of course, Vietnam which recently began drilling for oil in waters within the nine-dash line, much to Beijing’s chagrin.

Nor has China changed its position either. It has not, as some observers naively expected, tried to nudge its claims into line with the Tribunal’s ruling. Beijing continues to militarize the dispute, and the facilities on its manmade features are becoming operational, and it is only a question of time before we see the PLA make regular deployments of warships and fighter aircraft to the Subi, Mischief and Fiery Cross Reefs. After all, why spend billions of yuan on such facilities and not utilize them?

U.S. interests in the South China Sea have not changed either and nor has its policy. America continues to assert the importance of freedom of navigation and overflight, its opposition to the militarization of the dispute, and excessive maritime claims. The U.S. continues to provide capacity-building support to the Southeast Asian claimants. In May and June, it resumed FONOPs in the South China Sea—the first at Mischief Reef, the second at Triton Island in the Paracels. The two FONOPs, renewed arms sales to Taiwan, and U.S. criticism of China’s perceived reluctance to do more to stop Pyongyang’s nuclear ambitions suggest that the pendulum has begun to swing further away from where it was at Mar-a-Lago. The U.S.-China honeymoon—if it ever really existed— is well and truly over.

All of this demonstrates that the central drivers of the dispute—nationalism, competition over resources and geopolitics—remain unchanged, and that sooner or later, this period of relative calm is bound to come to an end.

Will the CoC save the day? Alas no. The draft framework is vague and amorphous, an uninspiring coaling station on the way to what is likely to be a lengthy voyage toward an indeterminate destination. The lull was nice while it lasted, but choppier waters are almost certainly before us.