From California to Syria

The recent shooting in San Bernardino, California has shocked America once again. A radical couple shot and killed 14 innocent people on Dec. 2. This has evoked a new wave of national debate as to whether it is desirable to ban the possession of guns in America. 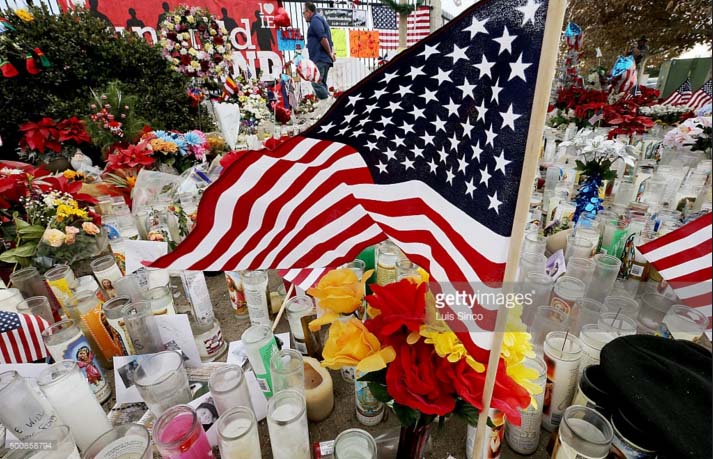 A memorial to victims of a terrorist attack in San Bernardino continues to grow near the Inland Regional Center on Thursday, Dec. 10, 2015.

As the couple might have vowed allegiance toward the IS, US federal agents have started investigating the probable link of the killers to terror. The US government is concerned about the possibility of IS penetrating into the States.

Such likelihood adds to the impetus of the US global anti-terror effort. Presently, the international community is collaborating to combat the IS in the Middle East. Though the IS initially expanded rapidly in Iraq in 2014, it has gained a bigger foothold this year in Syria, exacerbating the chaos Syria is facing presently. The brutality the IS has committed, and the exodus of refugees it has brought about, are pressing members of the international community to seal their differences so as to combat the IS.

In a rare case of global unity, the United Nations Security Council unanimously passed its Resolution 2249 on Nov. 20, urging all capable members to contribute to this anti-terror cause. The US is now signaling its willingness to help reconcile the differences between the Syrian government and its opposition so as to stabilize the war-torn country. US Secretary of State John Kerry even mentioned lately that America no longer sees the ousting of Bashar al-Assad as a necessary condition to rebuild Syria. Obviously this has much to do with Washington’s anti-ISIS strategy and agenda.

Washington has even tacitly been critical of Turkey’s energy business with the IS. In the wake of Turkey downing the Russian Su24 jet fighter, Moscow has revealed Ankara’s oil link with the ISIS energy sector, a big embarrassment for Turkey and America. While the US has not been pressing Turkey to clarify this, it has indicated that Ankara could do more to counter the IS, including tightening its border with Syria.

The US welcomes the role Russia is playing in Syria as long as Moscow does not strike the opposition in the name of fighting terror. Secretary Kerry’s recent visit to Russia may have started their talk on potential military coordination on striking against the ISIS.

On the domestic front, America has tightened visa control to prevent the abuse of visas in the wake of the shooting case in California. The US may not waive visa requirements for visitors from its partner countries as it has done, so as to reduce the risk of allowing in foreigners with malicious intent. Presently, public sentiment to minimize the risk of terror is on the rise. Over 30 states have refused to take any Syrian refugees, and one of the presidential candidates, Donald Trump, has stated the US should not to allow any Muslim immigrants. Despite massive denouncements by many political or public figures, Trump’s popularity is still on the rise, reflecting the real public fear of the terror incident.

It will take time for investigation to affirm the linkage between the aforementioned shooting and the IS. Meanwhile, the US has already strengthened its effort to contain terrorist threats both at home and abroad. For this reason, it has to gather international cooperation in Syria and elsewhere. In this context, America has to readjust its global strategy for countering terrorism, and there is reason to expect more positive development in this regard.