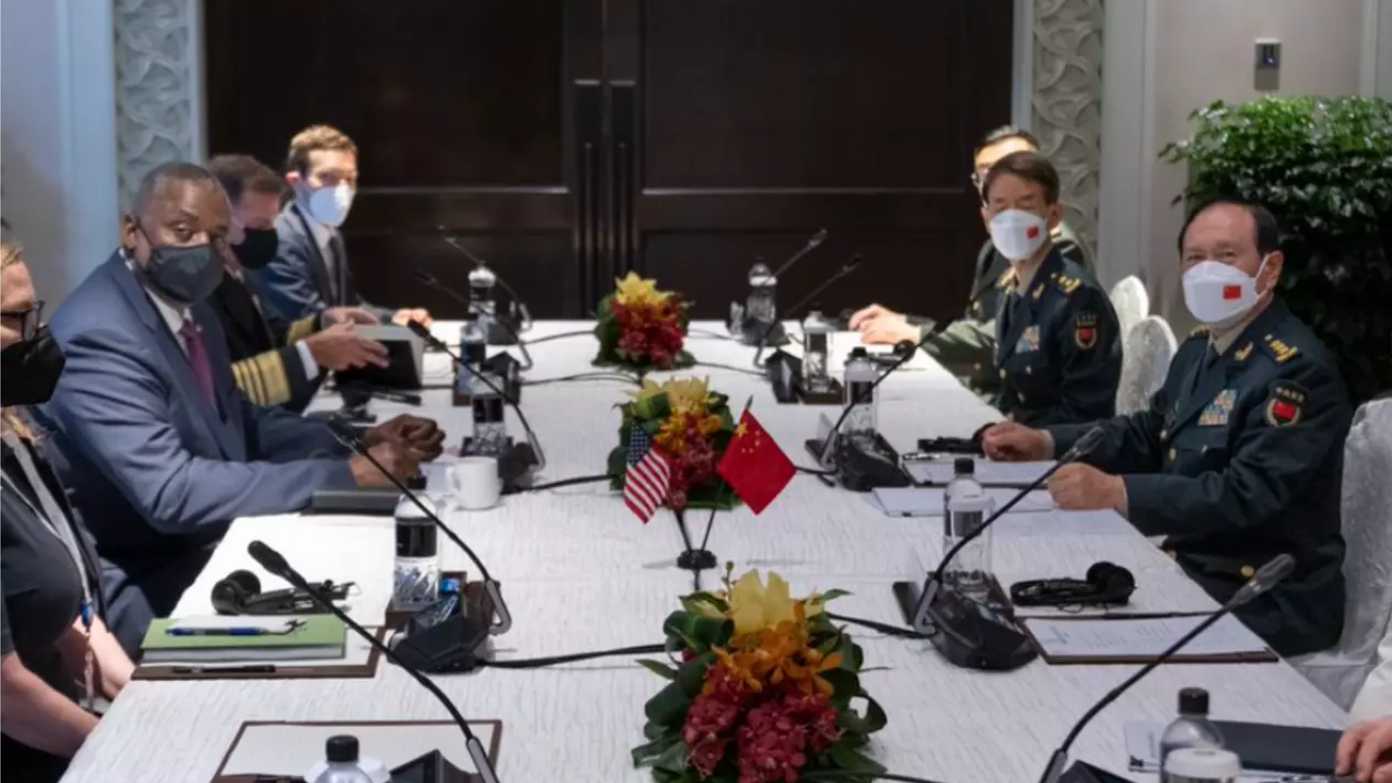 On June 10, ahead of the 19th Shangri-La Dialogue, the Chinese and American heads of defense had a face-to-face meeting. It was the first between Wei Fenghe, Chinese State Councilor and defense minister, and U.S. Secretary of Defense Lloyd Austin, after their call in April. Against the backdrop of rapidly evolving U.S.-China relations, the meeting would help somewhat stabilize their relationship and play a positive role in renewing recognition of the significance of military exchanges between the two countries.

Military relations have always been the most sensitive and closely watched aspect in state relations. Since 2012, military relations have been one of the few bright spots in China-U.S. relations, thanks to frequent exchanges between the two militaries at all levels and institutionalized dialogue platforms and joint exercises, catapulting it to new status as the “stabilizer” of bilateral ties, in addition to trade ties. But with the deterioration of relations between the two countries, military exchanges have been greatly reduced, and the military field has become an important area of competition between the two major powers. This year’s Shangri-La meeting was held more than two years after the previous one between the U.S. and Chinese defense heads in November 2019.

The U.S. Department of Defense issued a news release that emphasized the importance of “substantive dialogue.” The meeting was also extended from a scheduled 30 minutes to nearly an hour. The U.S. and Chinese militaries would engage in discussions and cooperation through military channels, especially at the working level, to develop effective communication channels and advance cooperation schemes — actions that could increase the stability and predictability of relations between the two militaries.

The current international situation is tumultuous and fluid, as the China-U.S. relationship is not the only one at an important historical juncture. The Russia-Ukraine conflict has sparked significant concerns over global security. The fact that the U.S. and Chinese defense chiefs were meeting face-to-face again after a hiatus of more than two years has undoubtedly aroused widespread concern in the international community and will help underpin the benign expectations of the international architecture involving the two countries and others in the Asia-Pacific region.

Crisis management was another key issue highlighted by China and the United States in this meeting. Be it the Chinese side’s emphasis on “risk management and crisis control” or the U.S. side’s proposal to “improve crisis communication and reduce strategic risks,” they both point to the critical mission of the two militaries to uphold the bottom line of China-U.S. relations in the current situation. Undoubtedly, the military is the ultimate guarantee of national security, but given the current dynamics of state-to-state relations, a stable and predictable military relationship remains fundamental to ensuring a relationship of “no conflict, no confrontation.” In recent years, the U.S. has been spearheading the idea of great power competition, going to extraordinary lengths to contain and deter China and implementing a new military strategy of “integrated deterrence.” Hence, the risk of military competition and confrontation is more pronounced than ever before.

For both sides, it is imperative to maintain the recent momentum of military exchanges, to continuously bolster the stability and predictability of military relations and to make good use of the crisis management mechanisms already in place. The mutual notification mechanism for major military operations and the code of conduct for maritime and aerial encounters signed in 2015 play an important role in preventing accidents and stepping up crisis management between China and the United States. These must be refined and upgraded further. Given the current atmosphere of overall relations, the military relationship is bound to provide a critical “floor” for bilateral ties, but it is only political mutual trust that can generate the lifting force needed in China-U.S. relations.

From China’s side, it is vital to fully recognize the important value of military exchanges and cooperation, while at the same time staying wary of the increased U.S. duplicity in military relations. The U.S. has previously viewed military exchanges as an important way to understand China’s military development process and to influence Chinese military thinking, and in recent years it has increasingly emphasized crisis management issues.

The U.S. aims both to constrain China’s military development with continued calls for the so-called Strategic Stability Dialogue, and to suppress China under the guise of stabilizing relations between the two militaries.

From the perspective of the U.S., as long as there is no military conflict at this stage, it can continue its containment policy in multiple areas — including Taiwan, the South China Sea and military alliances — while avoiding triggering significant Chinese countermeasures. Such considerations drive the proposal of the Biden administration to set up “guardrails” in U.S.-China relations.

As reflected in the Shangri-La Dialogue, the U.S. defense secretary appears to have sent signals of detente to China while still peddling the so-called China threat. Before the meeting, the U.S. also made frequent maneuvers, such as arms sales to Taiwan regional military alliances, escalating its long-term military investment and upgrades with China in mind. China should stay highly alert in this regard, and give full play to the role of military diplomacy in response to the current situation. It should leverage military deterrence effectively and step up the development of regional security arrangements in line with its own national interests and regional interests at large.

Shangri-La DialogueMil-Mil RelationsChinese MilitaryU.S. Military
printTweet
You might also like
Back to Top
CHINA US Focus 2022 China-United States Exchange Foundation. All rights reserved.