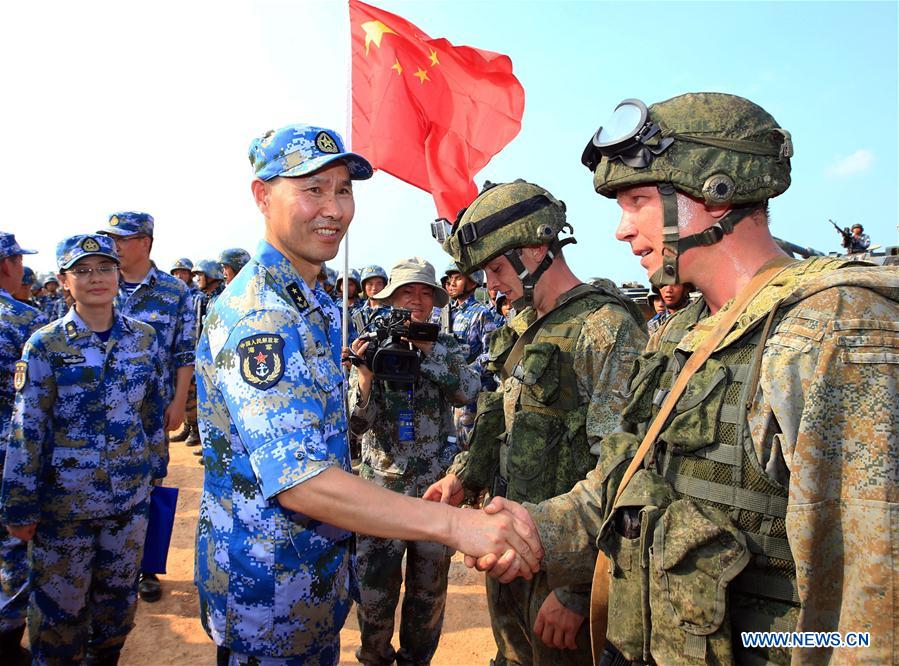 Russia-China relations have improved steadily over the past 25 years, and especially since Moscow’s relations with the West nose-dived following its annexation of Crimea in March 2014.

Put starkly, since the dissolution of the Soviet Union in 1991, Russia has sought Chinese money through increased trade and investment, while China has craved Russia’s rich natural resources and advanced defense technology. A friendly relationship with Russia has also freed China from having to face a strategic threat from the north, allowing it to focus on advancing its “core interests” in the south and southeast: Taiwan, and its territorial claims in the East and South China Seas. At the global level, Russian and Chinese opposition to U.S. hegemony has grown as both see themselves as targets of U.S. containment and US-inspired attempts to undermine their authoritarian political systems through Washington’s alleged support for “color revolutions.”

The South China Sea is one issue, however, where Russian and Chinese interests both converge and diverge—a phenomenon in Sino-Russian relations which Bobo Lo calls “rhetorical convergence and substantive divergence.”

The two countries’ strategic thinking converges on the role of the U.S.. As mentioned, Moscow and Beijing oppose U.S. hegemony and what they perceive as Washington’s tendency to act unilaterally and “interfere” in places that Russia and China consider to be their rightful spheres of influence; for Russia that’s the post-Soviet space (Eastern Europe and Central Asia), and for China, apparently, much of Asia, and especially the South China Sea.

Over the past few years, one of the purposes of the bi-annual combined Sino-Russian naval exercises has been to demonstrate to the U.S. that it isn’t the only country that can operate unfettered in the world’s seas and oceans. Thus in September 2016, Russian and Chinese warships held drills in the South China Sea, while in July 2017 the two navies exercised in the Baltic Sea, NATO’s backyard.

Beyond their joint opposition to U.S. hegemony and “meddling” in the dispute, however, Russian and Chinese interests in the South China Sea quickly diverge.

Although China occupies a privileged position in the Kremlin’s Asia policy, with Southeast Asia very much a secondary priority, Russia has some significant bilateral relationships in the region. Vietnam is by far Russia’s most important partner in Southeast Asia, but Moscow also has important ties with Thailand, Indonesia and Malaysia, and seeks to enhance relations with Singapore and the Philippines. Russia can’t afford to discomfit Southeast Asian countries—both claimants and non-claimants—by taking China’s side in the South China Sea. Thus, on the issue of territorial claims, Moscow has adopted a policy of strict neutrality.

With regard to China’s maritime jurisdictional claims—as represented on Chinese maps by the so-called nine-dash line, which encompasses approximately 80% of the South China Sea—Russia does not have an official position. However, few, if any, Russian legal experts would argue that China’s claims are compatible with the United Nations Convention on the Law of the Sea (UNCLOS)—in fact the majority of Russian experts view China’s expansive claims as quite absurd.

China’s “cow’s tongue” claims in the South China Sea also present a potential problem for Russia’s lucrative hydrocarbon projects in Vietnam. In 2008, Russia’s biggest producer of natural gas, Gazprom, signed an agreement with state-owned energy company PetroVietnam to develop gas fields in Blocks 129-132 which are located off Vietnam’s southeast coast and on the country’s continental shelf. The blocks appear to overlap with the nine-dash line within which China claims ownership of all maritime resources. Blocks 129-132 are only three blocks north of Block 136 from which the Spanish energy company Repsol was reportedly forced to suspend exploration activities in July 2017 in the face of pressure from China. In 2008, Russian diplomats expressed concern to their U.S. counterparts that they might one day be subject to the same kind of Chinese coercion as the American corporation ExxonMobil had experienced that year. Thus far, however, in the interests of good relations, Beijing appears to have left Gazprom—which is essentially controlled by the Kremlin—unmolested.

In January 2013, the Philippines legally challenged China’s nine-dash line under Annex VII of UNCLOS. An Arbitral Tribunal composed of five international judges was established to hear the case; China argued that it had no jurisdiction and refused to participate. Although Russia does not support China’s nine-dash line claims, it empathized with China’s decision. The Philippines had unilaterally brought the case against China without Beijing’s consent, and Russia, like China, believes that small countries should be suitably deferential to big powers. Russia also agreed with China that the court was biased against it; the president of the International Tribunal for the Law of the Sea was a Japanese national, and four of the five judges were Europeans who, in Moscow’s opinion, might not understand the sensitivity of sovereignty issues in Asia. Moreover, in Russia’s view, by rejecting the court’s jurisdiction, China was merely behaving as other permanent members of the UN Security Council had done so in the past, i.e. Nicaragua vs the U.S. (1986), Australia and New Zealand vs France (1973), Mauritius vs the U.K. (2013) and Russia itself over the Arctic Sunrise case in 2013. Why should China behave any differently?

As the Arbitral Tribunal case was reaching its conclusions, China tried to rally international opinion in support of its position that the dispute could only be resolved by the parties directly concerned and that the judges had no jurisdiction. When Russian Foreign Minister Sergei Lavrov said Russia was opposed to “internationalizing” the dispute, China took this as a gesture of support. However, when the Tribunal issued its award on 12 July 2016—essentially rejecting China’s “historic rights” claim to resources within the nine-dash line—Russia made its position very clear. According to a Foreign Ministry spokesperson, while Russia considered it a “matter of principle not to side with any party”, and rejected interference from external parties, i.e. the U.S., it supported a diplomatic solution based on international law, including UNCLOS. The spokesperson went on to stress that “We support the role of [UNCLOS] in ensuring the rule of law during activities in the world’s oceans. Moreover, it is important that the provisions of this universal international treaty be applied consistently and in a way that will not jeopardise the integrity of the legal system stipulated by the convention.” Although Russia avoided offending China by not calling on the two parties to abide by the ruling, its strong support for UNCLOS as a means to resolve maritime disputes was loud and clear.

On 6 September 2016, however, at the G20 Summit in Hangzhou, President Vladimir Putin seemed to muddy the waters when, in an unscripted remark, he said that Russia supported China’s decision to reject the Tribunal’s ruling. At the time, this was seen as something of a diplomatic coup for China as Russia was the only major power to back Beijing. Putin’s comment was also seen as a quid pro quo to China: we support your decision to reject the Tribunal’s decision, but we expect you to support us if we decide not to participate in legal proceedings brought against us by Ukraine over Crimea.

Ten days after Putin’s remark, Ukraine invoked legal proceedings against Russia under Annex VII of UNCLOS, accusing Moscow of interfering with its sovereign rights in maritime areas adjacent to Crimea. Russia knew that Ukraine was about to launch legal action against it, and Kremlin officials had discussed possible responses including non-participation—indeed this was probably at the back of Putin’s mind when he made his off-the-cuff comment in Hangzhou. But unlike China, Russia decided to participate in the hearings (and subsequently in another case brought by Ukraine at the International Court of Justice which accuses Russia of supporting terrorist groups in eastern Ukraine and mistreating Crimea’s Tartar and ethnic Ukrainian populations). According to Russian analysts who spoke with the author in Moscow in September, China’s stance toward the South China Sea case at The Hague may have partly influenced Russia’s decision to participate in the cases initiated by Ukraine. Although Russia saw that China was acting as other P5 members had, it also noted the reputational damage China had suffered after it had rejected the ruling. Some Russian legal experts also believe that one reason why the judgment was such an overwhelming defeat for China was because it had disrespected the court by refusing to participate. Far better for Russia to appoint its own judge and have him argue the Kremlin’s case before the other Tribunal members than heap scorn on the process from the outside and suffer the consequences.

Another area of divergence in Sino-Russian relations on the South China Sea is Russia’s arms sales to Vietnam. After the U.S., Russia is the second biggest arms supplier to Southeast Asia, and Vietnam—China’s principal protagonist in the dispute—is its largest customer. Over the past decade, Russian arms transfers, including fighter jets, missiles, frigates and submarines, have enabled Vietnam to build a credible military deterrent which might make China think twice before using its own armed forces in a crisis. China is not happy with Russia’s arms sales to Vietnam, but keeps quiet about because it understands the importance of defense sales to the Russian economy. Besides, from China’s point of view, a strong Russia-Vietnam defense relationship is preferable to close US-Vietnam military ties. Similarly, Beijing views Russia’s unfettered access to Vietnamese military facilities at Cam Ranh Bay as preferable to regular U.S. access. After all, Beijing can put pressure on Moscow to limit its activities with Vietnam in ways that it can’t with America. Moreover, Russia has agreed to transfer some of its most advanced defense technology to China, increasing its military edge over the other claimants in the South China Sea. And as Russia-China relations grow closer—facilitated by good personal chemistry between President Xi Jinping and Putin, who are likely to remain in power for another 5-6 years—Beijing understands that over the long term, Russia’s interests in China will far outweigh its interests with Vietnam.

In summary, on the South China Sea, Russian and Chinese interests converge when it comes to opposing U.S. “meddling,” but diverge over the legitimacy of China’s nine-dash line claims and arms sales. The bottom line is that Russia doesn’t want to get too deeply involved in the dispute because, for economic reasons, it wants to stay on good terms with both claimants and non-claimants alike. Moreover, Russia is happy to see a continuation of the status quo in the South China Sea; for although it would be loath to admit it publicly, the on-going tensions help fuel the country’s arms industry and distract America from Russia’s ambitions in the post-Soviet space and elsewhere.

South China SeaChina-Russia Relations
printTweet
You might also like
Back to Top
CHINA US Focus 2018 China-United States Exchange Foundation. All rights reserved. Disclaimer