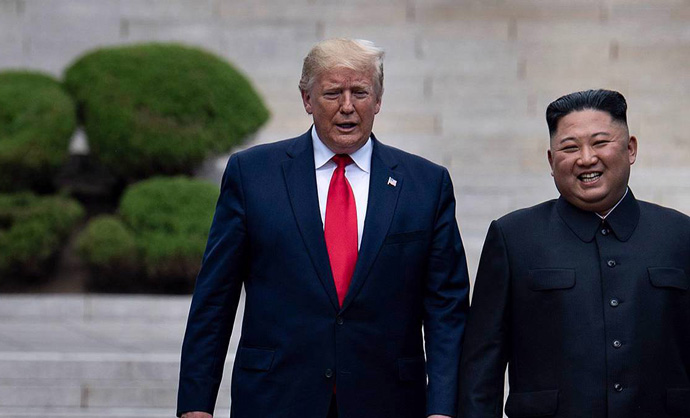 Although the United States and the Democratic People’s Republic of Korea made opposite comments about their working-level nuclear talks in early October, neither could deny that the eight-and-a-half-hour meeting had ended with no progress.

This round of bilateral talks was the first official contact between the two parties seven months after their top leaders’ second “non-result” summit early this year. Most media outlets from South Korea and Japan used words such as “breakdown” or “collapse” to describe what happened.

Both the U.S. and North Korea have persisted in their rigid strategies to address the nuclear challenge. As a result, the price they would exact from each other has become exorbitant. North Korea blames the U.S. for “failing to come up with a new proposal acceptable to Pyongyang,” while the U.S. insists that CVID or PVID (complete or permanent verifiable irreversible dismantlement) is a precondition for the lifting of sanctions. When asked how much sanctions relieve would be acceptable, the North Korea delegation immediately replied “all of them.”

Why did this zero-sum situation develop? A lot of talk has taken place about mutual distrust arising from the up-and-down nuclear issue in recent decades. Much less attention has been paid to the historic mission that the nuclear programs have borne for this country. As North Korea continues to make the world dizzy with uncertainty through its abrupt reversals, there should have been some deeper digging into what it really wants. It would be much more practical for talks to move ahead if the international community were clearly aware of North Korea’s demands, including those untold, and putting aside whether they’re reasonable or not.

No matter how skilled North Korea and its leader are at this geopolitical game, it is undeniable that the regime is relying too much on its major — if not only — set of cards: its nuclear weapon systems, which have become advanced enough to put U.S. mainland territory within reach after decades of development.

Under the North’s opaque nuclear dome, rumored to house an arsenal of three dozen nuclear warheads, the DPRK unbendingly protect its blueprint not only for survival but for being a powerful and prosperous nation. That’s why there has been consistent muscle-flexing in the form of missile tests. North Korea needs to prove, both internally and externally, that the dome is strong and working.

Since North Korea is pouring virtually all its money into its nuclear programs on behalf of the nation, it is far from satisfying if it must meet the CVID criterion only to get a paycheck of sanctions relief, let alone partial relief. The bargaining list it could draw up for the United States would be a long one. And North Korea will not show its hand until its counterpart throws more, and bigger, chips onto the table.

So let’s take a look at United States “failing to come up with a new proposal.” With all the zigzags of bilateral relations over the past 70 years, being tough against North Korea has become axiomatic among Washington political elites. The concept of CVID, which was raised in May 2003 by John Boltonf — at the time a senior official in the Department for International Security and Disarmament Affairs of the George W. Bush administration — had been expressed as a key policy goal of hardliners for more than 15 years.

In May 2018, in his first speech to the UN, the new U.S. secretary of state, Mike Pompeo, marched one morepushy step by changing “complete” dismantlement to “permanent” dismantlement, aiming to forestall any future attempt by North Korea to revive its nuclear weapons program after having eliminated it. Although the Trump administration has shown rarely seen flexibility toward North Korea, this fundamental policy remains unshakable.

The issue of North Korea is so subtle and sensitive that both presidents Obama and Clinton chose to keep the distance and exercise strategic patience. U.S. President Donald Trump took a more adventurous path by having face-to-face meetings with Kim. However, when he received pungent criticism from opposing parties and domestic media for making concessions in exchange for almost nothing at the first summit, Trump tuned to a lower key.

Considering the coming presidential election, if a certain foreign policy won’t score, zero is much better than minus. Kim doesn’t vote, after all.

Today, North Korea has unbolted its door from the inside and is urging the U.S. to push to get in. Meanwhile, the United States remains seated at the table outside, unconcerned, waiting for North Korea to voluntarily disclose the nuclear dome. Maximum sanctions have squeezed material resources and many international connections out of North Korea. Among the things lost is the North’s “strategic patience.” Kim warned the people to go for self-reliance shortly after the failure of the Stockholm talks.

It is still too early to say that North Korea might turn back again, but it would be the worst option for all the parties to endure regional tensions such as those before 2017.

The most recent missile test firings after the talks, as well as North Korean rhetoric, show that it is still at the table, and it’s likely that Kim will try again before he desperately decides to give up. The year-end deadline as proposed by North Korea is not far away, and it’s uncertain whether North Korea will make another “big move” to stay in the spotlight, as it did previously by test-firing an ICBM. That test presented a direct security threat to the United States and yielded two summits between the two top leaders.

What can the stakeholders do, then? It surely is a matter of internal policy process to decide whether to keep or give up nuclear weapons. However, this policymaking process is affected by external factors. History is teaching lessons. Concerns over such external security threats as military invasion or living with continued hostility are at the top of the list for a country trying to obtain, keep or even restore nuclear programs. Iran comes to mind.

But effective control of tensions, institutional easing of confrontation and chances for escaping international isolation are key in any governmental evaluation of a new defense strategy. It is a pity that South Africa is still the only country that voluntarily gave up its nuclear weapons after having begun. It built and obtained a whole set of rather advanced nuclear weapon systems over nearly half a century.

What’s notable is that maximum pressure is not as workable as the imposers of sanctions expected it to be. Escalated sanctions might halt nuclear programs but may even strengthen the target’s determination and actually offer time in which a nuclear program can be developed.

The North Korean and U.S. willingness and flexibility to talk with each other has helped create an atmosphere for denuclearization. The suspension, downsizing and cancellation of joint military exercises, as well as the UN’s granting of sanctions waivers for humanitarian projects in North Korea, have contributed to the regional easing of tensions.

South Korea’s Moon Light policy, a collection of comprehensive efforts by both the government and civil organizations, has kept the atmosphere warm for talks. There are already expectations for more working level talks to make a third summit happen.

China’s proposal of double suspensions and staged denuclearization has been recognized for its practical and peaceful guidance and is believed to have received more support. As Joseph Yin, former special representative of the U.S. State Department, said in a Yonhap interview on Oct.16, the complete denuclearization of North Korea cannot be seen in the near future but the problem could be resolved step by step. It might take 30 years from freezing of the North Korean nuclear program to the verification of it.

China-U.S.-North Korea RelationsNorth KoreaDenuclearization
printTweet
You might also like
Back to Top
CHINA US Focus 2022 China-United States Exchange Foundation. All rights reserved.