On December 16, 2015, the U.S. State Department approved a $1.83-billion arms sale to Taiwan, the first such agreement since 2011. The weapons include mostly additional units of systems already in the Taiwanese inventory, such as Stinger MANPADS, BGM-71 TOW 2B, AAV-7 amphibious assault vehicles, and a pair of Oliver Hazard Perry-class frigates. The deal also includes communications and other enabling technologies. However, the current sale is considerably smaller than its recent predecessors, which included around $6 billion worth of armaments in 2010 and in 2011, and excludes advanced warplanes, submarines, or “offensive” weapons. 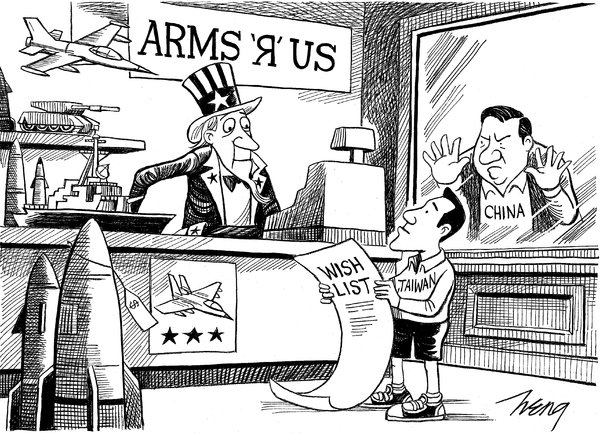 The United States has been selling weapons to Taiwan for decades and the mainland government has long sought to end them. In October 2008, for example, after the Bush administration indicated that it would sell Taiwan $6.5 billion in military equipment, the Chinese government suspending almost a dozen China-U.S. military exchange programs—cancelling high-level defense visits, denying U.S. Navy ships access to Chinese ports, and postponing meetings on nonproliferation, humanitarian assistance, disaster relief.

The Chinese government’s response to the most recent U.S. government arms sales has thus far been less severe. PRC representatives criticized the decision in public, protested directly to U.S. diplomats, and threated to retaliate against the U.S. companies involved in the sales. But there have been no cancellation of military exchanges r other bilateral programs.

The damage was limited due to arguably excessive U.S. restraint in providing more advanced systems (even though the PLA already has them), the improvement in cross-Strait ties seen most recently in the 2014 presidential summit in Singapore, the current Chinese government’s increased interest in sustaining China-U.S. defense relations, and the preoccupation of both governments with other security differences, such as Chinese and U.S. military activities in the South China Sea.

The United States has assured Taiwan that it would not set a date to end these arms sales or consult in advance about these transactions and committed to Beijing to limit these sales and support a one-China policy. Future damage in relations between all three actors could be reduced further if the United States made more frequent if smaller sales (yearly rather than every few years), if Taiwanese and Chinese politicians refrain from provocative statements and actions on this issue, and if Chinese policy makers better understand why the United States will likely continue these sales.

By waiting until 2015, the Obama administration has created the longest gap in major arms sales to the island since the White House was congressionally mandated to support the Taiwanese military in 1979. The U.S. government has a legal obligation to continue such sales in the Taiwan Relations Act (TRA) adopted in April of that year. Although ending the 1954 Sino-American Mutual Defense Treaty, the TRA commits the United States to supply Taiwan with the weapons it needs to maintain a “sufficient self-defense capability.” However, the legislation does not mandate any minimum volume of sales and Congress must approve each transaction. The transfers would be seen as more normal if they occurred more regularly.

The decision to finalize the more recent arms sale so close to the January 2016 presidential legislative elections in Taiwan likely reflects a U.S. decision to reaffirm support for Taiwan’s democratic credentials, discourage Chinese interference in Taiwan’s political process, and give Washington more leverage to influence the policies of the next Taiwanese government.

From the perspective of regional stability, U.S. officials have justified these weapons sales on the grounds that they help sustain the peaceful status quo in the Straits by partially balancing the PLA’s growing capabilities and thereby discouraging either party from using military coercion or taking other unilateral actions that threaten the other. If the Taiwanese concluded that the cross-Strait balance was rapidly shifting against them, they might preemptively declare independence as a separate country before the military situation became too unfavorable.

In addition, Washington worries that declining to assist the Taiwanese military could encourage Beijing to adopt aggressive policies toward Taipei, increasing the risks of a Sino-American confrontation through miscalculation and thereby inflicting a major economic shock on China, Taiwan, the United States, and other countries. China’s 2005 Anti-Secession Law authorizes the use of force if Beijing concludes that peaceful reunification efforts will prove unsuccessful.

U.S. officials have also feared that stopping conventional arms sales to Taiwan could have the untoward effect of prompting a panicky Taipei and other U.S. security partners, such as Japan and South Korea, to pursue nuclear weapons, long-range missiles, or other destabilizing strategic weapons. Each of these three actors has been building offensive conventional weapons and they have the capacity to make nuclear weapons.

From a moral perspective, Taiwan is an attractive partner for Americans given its democratic political system, with competitive multi-party elections in which the results are not decided in advance, and its other political and economic freedoms. Under present circumstances, the transfer of the PRC’s political system to the island would result in a setback for the global democracy and human rights agenda supported by the United States.

From a realpolitik perspective, Taiwan contributes to U.S. security in multiple ways, from serving as a strategic indicator regarding how China will use its growing international power to reinforcing the credibility of the U.S. security guarantees that underpin the East Asian security architecture that has promote regional peace and prosperity, including to the benefit of China and the United States.

From the bargaining perspective, the U.S. administration cannot seem to yield to Chinese threats to suspend defense exchanges or otherwise punish the United States over the issue of U.S. arms sales to Taiwan or related questions. Not only would encourage negotiators from China and other countries to think they can achieve more gains from further threats, but a stream of unbalanced U.S. concessions would undermine domestic public confidence and support for a generally cooperative U.S. government policy toward China.

Fundamentally, the United States continues its policy of strategic ambiguity, not taking sides on what Taiwan’s ultimate fate should be, but insisting that Beijing-Taipei differences should be settled by peaceful means. U.S. arms sales policy have sought to balance enhancing Taiwan’s defense capacity without emboldening rash Taiwanese actions, and to deter Beijing without provoking the Chinese government. The United States could suffer as much as any actor from military conflict between China and Taiwan.

By providing the weapons, the United States has arguably made Taipei more confident about working with Beijing to reduce cross-Strait tensions in recent years. Continuing arms sales will help provide the reassurance the Taiwanese need to engage with Beijing in coming years without really threatening China, as even Chinese scholars acknowledge, presenting a security threat to China.

The best way to promote cross-Strait cooperation is for China to continue its economic and political reforms and to reduce its military threat to Taipei, beginning with a reduction in the Chinese missiles aimed at Taiwan. A constructive reunification process will require the support of a large majority of the Taiwanese people, which is currently lacking but can be achieved through wise policies in Beijing.

A thanks to Wei Luo and Wesley Swanson for providing research assistance with this article.

Cross-Strait Relations Taiwan
printTweet
You might also like
Back to Top
CHINA US Focus 2018 China-United States Exchange Foundation. All rights reserved. Disclaimer