US Congress Should Stop Trying to Reverse History on Taiwan Question 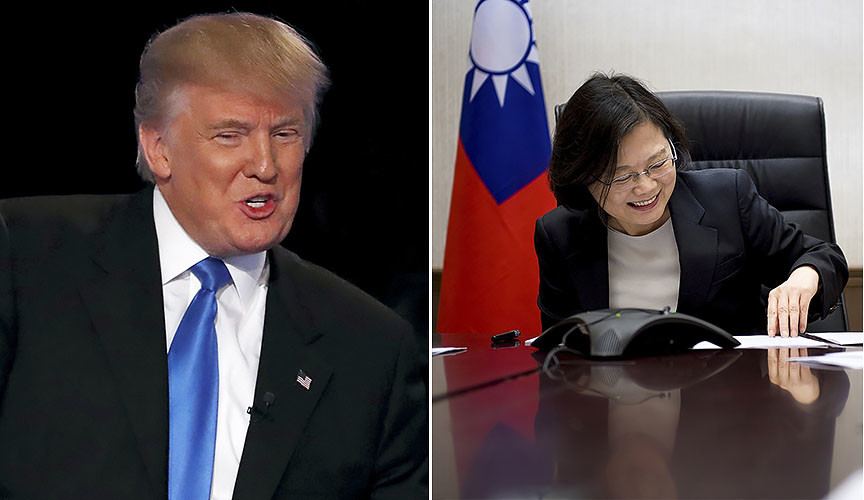 The US House of Representatives on July 14 passed the National Defense Authorization Act for Fiscal Year 2018, which includes requiring the Defense Secretary to study the feasibility of US and Taiwanese naval ships having port of call stops in each other’s ports and to normalize the transfer of defense articles and defense services to Taiwan. The news caused public uproar. If the Senate adopts similar clauses and if the act is signed into law by the US President, that will be a serious violation of the one-China policy that has been adopted by the various administrations and a brazen move to reverse history. When China and the US negotiated the establishment of diplomatic ties, Deng Xiaoping made it very clear that the Chinese side had consistently demanded the fulfillment of three conditions, i.e., severing diplomatic ties with Taiwan, withdrawing troops from Taiwan and abolishing the mutual defense treaty with Taiwan — and that China has no other considerations as the Taiwan question bears on Chinese sovereignty. The Carter administration agreed to the conditions put forward by China and relations with China were thus normalized. The Chinese side agreed that the US would maintain unofficial relations with Taiwan by way of commercial and cultural exchanges. All the American administrations after Carter have since stressed the ‘unofficial’ nature of relations with Taiwan. Port calls by naval ships can by no means be described as part of the ‘unofficial relationship’. Obviously they will collide with and violate the one-China policy.

For a long time, there has been an anti-China and pro-Taiwan force within the American society. Since normalization of relations between China and the US, it has gone through ups and downs, being reclusive and restless alternately. It has always been plotting to disrupt cross-Taiwan-Strait relations, supporting pro-independence forces in various ways and creating obstacles for China’s reunification by various means. Members of this force even openly call to ‘disconnect Taiwan from US-PRC policy to the greatest extent possible’, believing that rather than treating it as a subset, the US-Taiwan relationship should have its own agenda. These are brazen advocates of ‘one China, one Taiwan’. Peaceful development and economic integration across the Taiwan Strait has set them on pins and needles. With the DPP regaining power, these people have seen their prospects rise and seized the opportunity to give counsel to the Taiwan authorities and act as a go-between for Taiwan and the US. We must therefore guard against the interfering and disruptive moves by this force.

This force is mainly in the US Congress. Conservative forces in the Congress have all along been pushing for upgrading US-Taiwan relations. Some individual congressmen have even, rather absurdly, proposed that the US should switch from its one-China policy to one China and one Taiwan, ‘recognize Taiwan’s sovereignty’, ‘establish diplomatic relations’ with Taiwan and support Taiwan’s ‘membership in the UN’. There are always people making waves on the Taiwan question in each Congress. For example, in the 113th Congress, the House Foreign Affairs Committee proposed the Taiwan Policy Act of 2013, demanding a comprehensive upgrade of relations with Taiwan in the political, economic and security fields and supporting expansion of international space for Taiwan. It was actually the Taiwan Security Enhancement Act of 1999 in a new guise. In December 2016, some congressmen again smuggled their private thinking into the National Defense Authorization Act for Fiscal Year 2017. Section 1284 of the act after House and Senate coordination obligates the Pentagon to carry out a program of exchanges with Taiwan involving senior military officers and senior officials, allowing generals or flag officers of the US armed forces on active duty as well as Pentagon officials above the level of assistant defense secretary to visit the island. Obama signed it into a law on the 23rd, with section 1284 under the title of ‘sense of Congress on military exchanges between the US and Taiwan’, thus with no legal binding force. Now some congressmen are trying new tricks. This shows that there are always some American politicians who are ready to play the ‘Taiwan card’ in China-US relations so as to pin down China or create obstacles for its rise. But the card is a dangerous one and the US may well end up hurting itself.

The administration is not incapable of anything in the congressional legislation process. On the contrary, the administration may well exert its influence by communicating with critical members of Congress to delay or even stop the adoption of a certain act. The Taiwan Security Enhancement Act was a good example. The Clinton Administration strongly opposed it. After House adoption in early 2000, the administration worked on the Senate. As a result, the Senate did not vote on it and the House bill never became a law.

The one-China policy is the political foundation of China-US relations. The Taiwan question is at the core of all three well-known joint communiques. It remains the most important and most sensitive question in bilateral relations, bears on China’s sovereignty and territorial integrity, and represents China’s core interests. The Chinese position has all along been extremely clear and extremely firm, with no room for hesitation or compromise. While issues in bilateral economic relations and trade are negotiable, the one-China policy is not. The Trump administration should carefully sum up the lessons of previous administrations on the Taiwan question and minimize its impact on overall China-US relations so that steady progress could be made, especially in their economic relations and trade, which bring tangible benefits to both sides. Any setback in China-US relations caused by the Taiwan question will benefit neither.