What If Chinese and American War Ships Collide With Each Other? 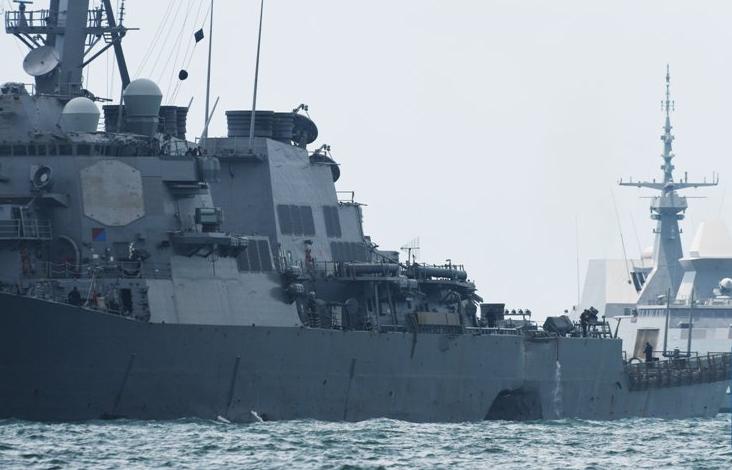 When the guided-missile destroyer USS John S. McCain collided with a heavy oil tanker near Strait of Malacca on August 21st, leaving one sailor dead and nine missing, this was already the fourth similar accident this year for the U.S. Seventh Fleet. The question is: how can what seems impossible occur to the strongest navy in the world?

Before investigators pieced together the causes of the fatal crashes, experts widely assume fatigue and under-training of the seamen are most probably the reasons behind. According to the Wall Street Journal, the American deployable battle force, at 276 ships, is far smaller than what’s needed to meet demand. So the ships have to be kept at sea longer. Longer deployments put wear and tear on sailors, their families and the fleet and cause ships being overused and short of maintenance.

Here comes the worst scenario: what if an American war ship collides with a Chinese war ship, say, in the South China Sea? This is not impossible. A Chinese J-8 fighter and an American EP-3 aircraft collided in 2001 and the Chinese pilot died. Quite a few standoffs have occurred between Chinese and American ships. In 2013, a Chinese landing ship cut in and stopped less than 500 meters in front of the USS Cowpens to prevent it from getting close to the Chinese aircraft carrier “Liaoning” under sea trial. Whenever an American ship conducted freedom of navigation operations (FONOP) into 12 nautical miles off China-controlled islands in the South China Sea, the Chinese ships are sure to follow and monitor.

It is fair to say that neither China nor the US wants a conflict triggered by an incident at sea. Both China and the US have pledged to observe the Code for Unplanned Encounters at Sea (CUES) and bilateral rules of behavior for unplanned maritime and air encounters. Whenever the US Navy conducted a FONOP off China-controlled islands and reefs to challenge China’s sovereignty over the “artificial islands” which China believes are its territories, it praised the Chinese ships following behind being “professional” in keeping distance.

But what if the US ships turn out to be the ones that are not professional? High-tech can never prevent human errors, as demonstrated in the four incidents. And a big issue between China and the US is lack of trust. Since Donald Trump took office, the Seventh Fleet has increased FONOPs in the South China Sea. If a “professional” Chinese naval vessel happens to meet an “unprofessional” US naval vessel next time, how can the Chinese ship commander distinguish between deliberate provocation and bad seamanship on the American side?

Is America’s navy in the Western Pacific doing too much with too little, asked the Economist. But for America’s Navy to answer this, it needs to answer, first of all, what is the dire need to do so much.

The most-mentioned raison d’etre for increased American naval presence in the West Pacific is North Korea and China. Apparently Kim Jong-un is not deterred by American ships and bombers. Instead, they have actually made Kim more antagonistic. When it comes to China, America needs to search its soul to answer two basic questions: does China real have so many military secrets for the US to justify its daily surveillance and reconnaissance by satellites, aircraft, drones and ships? If not, what is the rationale to maintain such high intensity if these activities are tactically useless and strategically unhelpful to mutual trust?

No matter how the US Navy throws its weight around in the South China Sea, China knows the US won’t fight over the reefs and islands for any claimants of ASEAN. Therefore American FONOPs have only face values. And even these face values are questionable. China and the US have different interpretations of the freedom of navigation, but as early as 1998 and in accordance with the UN Convention of the Law of the Sea, China has made freedom of navigation one of the basic principles in PRC Law on the Exclusive Economic Zone and the Continental shelf. In a stark contrast, the US still refuses to ratify the convention.

If freedom of navigation is the mantra of the US Navy, the incidents indicate, however sarcastically, it is the US that is interfering with freedom of navigation at the cost of the life of its own sailors and the life of other innocent people. It adds to people’s feeling of America’s decline. Is the US really declining? At least President Trump thinks so, otherwise he wouldn’t have said to make America great again. But his vow to increase American ships from 276 to 350 sounds more like one of the pledges that he made but doesn’t really bother to honor. For the US navy, it remains to see how long it can still pretend that it is as strong as before it reaches its breaking point.