A New Phase of Xi's Leadership 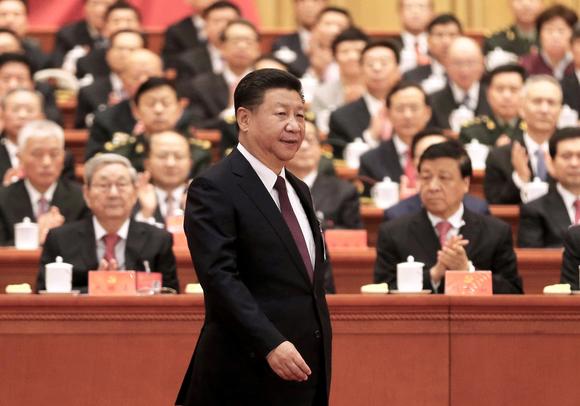 Mr. XI Jinping was elected the General Secretary of the Communist Party of China (CPC) at the Eighteenth Party Congress in November 2012. In the five years between the Eighteenth and the Nineteenth Party Congress, Mr. XI has accomplished a great deal. First and foremost, with his very successful anti-corruption campaign, he averted the biggest threat to the continued survival of the party and the nation. The precariousness of the situation can be seen in the hundreds of thousands of high-level party and government officials and many officers of general rank in the armed forces that were purged because of rampant corruption, including the buying and selling of offices and ranks.

Second, under Mr. XI’s leadership, the Chinese economy successfully avoided a hard landing and was able to transition smoothly into a “new normal”, with a steady rate of growth of approximately 6.5 percent per annum, a still very respectable rate of growth compared to developed economies. The reliance on exports and fixed assets investment as drivers of economic growth has diminished and the excess production capacities have been slowly but surely reduced through the supply-side structural reforms. During the same period, an additional sixty million plus people were lifted up from poverty.

Third, China was able to raise its external profile and participate in global governance without appearing either too aggressive or too accommodating. It managed to play a leading role at the 2015 United Nations Climate Change Conference in Paris and was instrumental in bringing about the Paris Agreement, which won the unanimous consent of the 196 contracting nations and other parties. Even with the threatened withdrawal by the U.S. from the agreement, China has remained steadfast in its commitment to fulfil and even over-fulfil its promised targets and has become a global leader against climate change. Mr. XI has also initiated the ambitious Belt and Road Projects.

Thus, it was no surprise that the Congress was a triumphal celebration of his successes. Even before the Congress was convened, Mr. XI was already referred to as the core of the party leadership. At the Congress, Mr. XI’s adaptation of Marxism in the form of socialism with Chinese characteristics for a new era, was officially enshrined in the Charter of the Party as XI Jinping Thought, and placed at the same level as Marxism-Leninism, Mao Zedong Thought, Deng Xiaoping Theory and the doctrines of his predecessors JIANG Zemin (the three represents) and HU Jintao (the scientific development view), which are all considered guidelines for actions for the party. Through the Congress, Mr. XI has cemented his control over the party and put his own team in place. He will be able to set the direction for the nation in the next fivc years and implement a programme that is truly his own.

Mr. XI subscribes to the view that “the nation can be governed well only if the party is governed well; and the party can be governed well only with the strictest discipline.” After the Congress, there is no doubt that he is in complete control of the party, and it will be through the party that he will exercise his power to move the government and the nation. For example, it would be possible for him to push forward the economic reform programmes such as letting the market play the determining role and resolving the problem with “zombie” enterprises. That is precisely why supremacy of the party is so important. While the Party’s leading role is clearly spelled out in the Chinese Constitution, the more recent move to introduce language in corporate charters affirming the leading role of the party is new and reflects a desire to make enterprises more responsive to the party’s directions and needs. This may have been motivated by the fact that some of the economic reforms advocated by Mr. XI have yet to be fully completed.

Mr. XI must have reflected on the question: How was it possible to have so much corruption within the Communist Party of China, the Government and the armed forces? In his work report to the Congress, Mr. XI repeatedly emphasised the importance of Chinese culture and Chinese philosophy. This may reflect the realisation that ultimately character and values, and not just talent, ability and popularity, are important determinants of actions and behaviour. In order to make the Party a clean and effective governing body, it is important to try to motivate the members through ideology and to appeal to their idealism and patriotism, and not to rely solely on potential punishment as a deterrent. Mr. Xi wants a party with members who are not corruptible because of their own personal beliefs and values. The new and abundant private wealth in China poses a huge temptation to party members. The four traditional Chinese values of “courtesy, righteousness, honesty and shame” may once again have to become relevant. Mr. XI places great importance to the education and nurturing of party members. It is useful to reflect that for approximately two millennia before the early twentieth century, Chinese government officials were chosen through the examination system—it was a meritocracy. However, it was not just a meritocracy, as the scholar-officials and the potential scholar-officials were required to adhere to strict personal behavioral norms. Thus, they were more akin to a “priesthood”. I believe Mr. XI expects party members to be both meritorious and virtuous.

One of the outcomes of the Congress was that, in accordance with the established custom, the eleven Politburo members who have reached the age of 68, including Mr. WANG Qishan, the anti-corruption Czar, retired. What implications does this have about the anti-corruption campaign? I believe anti-corruption will continue, but perhaps it will enter a new phase. With many of the government officials retired, anti-corruption can become more forward-looking, focusing on current wrong-doings rather than past deeds. The goal should be to make sure that no one will engage in corrupt practices after the Nineteenth Party Congress. This change in focus will allow current officials to concentrate on their current tasks rather than to try to hide past mistakes.

The expected establishment of a State Supervisory Commission, with provincial, municipal and county level branches, in the spring of 2018, mentioned in Mr. XI’s work report, is a momentous decision with far-reaching consequences. In principle, the Central Commission for Discipline Inspection (CCDI) is only responsible for supervising the actions of party members. It cannot prosecute any suspected offenders in the courts or send them to jail; only the state prosecutor can do so. The new State Supervisory Commission will be able to exercise the prosecutorial functions in cooperation with the Central Commission for Discipline Inspection. It will actually be similar to the Independent Commission Against Corruption (ICAC) of Hong Kong, which has had a huge impact in the reduction of corruption in Hong Kong since its inception in the 1970s. The establishment of the State Supervisory Commission regularises and normalises anti-corruption in China and hopefully will have a similar positive impact.

The new Standing Committee of the Politburo apparently has no member young enough to be a potential successor (who can serve for ten years) to Mr. XI five years from now, leading to speculation that he may stay for another term. I would only say that the “retire by 68” rule is only a custom. What would happen five years from now depends on what is best for the Chinese nation at that time.