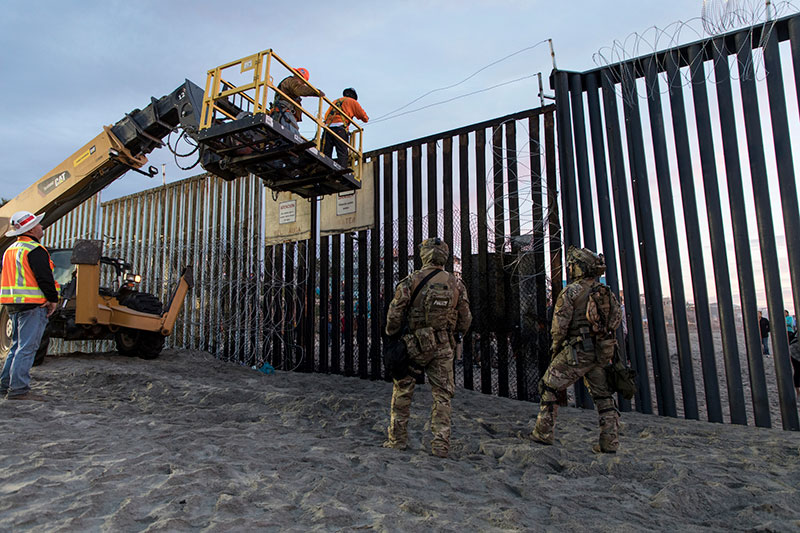 Long before President Donald Trump, there was another American love affair with China’s Great Wall. Naturally, it was none other than Benjamin Franklin, the chief disciple of Confucius and chinoiserie among the Founding Fathers of the United States.

After commissioning him as a military commander, Governor Robert Morris of the Pennsylvania Colony dispatched Franklin to defend the British colonists against the encroaching French and their Native Indian allies by building a “line of forts” in the French and Indian War (1754-1763). Envisioning China’s Great Wall, Franklin had other ideas. He wrote, “You cannot protect the country from Indians on the warpath by forts. They can pass between them through the forests, burn and pillage and massacre the people of the scattered villages, and return again in perfect safety. Only a Chinese wall the whole length of the Western frontier would be a sufficient protection against these savages.”

When the war broke out in the Ohio River Valley in 1754, Pennsylvania was divided on a provincial security strategy. While some argued for carrying the war to the enemy in the disputed area between New France’s territory in Canada and the colonies of British America, supporters of Governor Morris and Franklin advocated a defensive strategy with forts that “were connected by a wall like that of China.”

After initially building Fort Allen, Franklin supervised the construction of three other fortifications — Forts Franklin, Hamilton, and Norris — over the Blue Mountains of Pennsylvania between the Delaware and Susquehanna rivers. To galvanize public opinion to unite the colonies and defend against France, Franklin published a now-famous political cartoon in 1754, “Join or Die,” and wrote to support the construction of forts on “the Back of our Settlements in all our Colonies.”

In his letter to Franklin in 1776, the Chevalier de Kermorvan, a French engineer in the Continental Army under George Washington, disagreed, arguing that “this work would be as useless here as the great wall of China, which has not preserved this empire from being conquered by the Tartars.” Likewise in our present day: General John Kelly, former chief of staff to Trump concluded that “if you want to stop illegal immigration, stop US demand for drugs, and expand economic opportunity” in Central America.

Unlike the American experience, the Great Wall of China was actually built — but it took a period of two millennia, and countless human tragedies for the laborers involved. It first began some time during the years of Confucius’s lifetime (551-479 BC). But it was the ruthless Emperor Qin Shi Huang of the Qin dynasty (221-207BC), the first emperor of a unified imperial China, who connected a network of separate fortifications into a single defensive system against the invading Mongol, Turkic, and other nomadic tribes. In the ensuing centuries, various dynasties continued to construct a strong defensive border wall to safeguard against foreign invasion, regulate immigration, and manage trade until the Ming dynasty (1368-1644 AD). While it hardly prevented the non-Chinese nomadic intruders like the Mongols and Manchu from establishing the Yuan dynasty (1279-1368) and the Qing dynasty (1644-1912) respectively, the Great Wall has indeed played a historic role in unifying the Chinese nation and its civilizational identity.

Meanwhile, President Trump’s campaign to build a “Great Wall” of concrete and steel across the US-Mexican border — denounced by Democratic leader Nancy Pelosi as “immoral” — has more to do with the white nationalism shrouded in the White House’s immigration policy. The president’s descriptions of invading “caravans” of migrants, “criminals,” and war refugees from Muslim countries coming through the Mexican border seem to resonate with yet another wall dreamed up in the American republic’s early days.

In considering the New York Constitution, John Jay, who later became the first chief justice of the US Supreme Court, suggested that “we must erect a wall of brass around the country for the exclusion of Catholics,” which generally meant French, Irish, Italians, and Spanish as opposed to white Protestants. The New York Constitution in 1777 proclaimed freedom from “spiritual oppression and intolerance wherewith the bigotry and ambition of weak and wicked priests and princes have scourged mankind.”

The polemical power of a “wall” is still present in American public discourse as it has always been ever since Thomas Jefferson’s original phrase of “a wall of (eternal) separation between church and state.” The American experiment born out of the Jeffersonian ideal that “all men are created equal” was meant to eventually make the new republic into a great melting pot. Unlike China’s rising and falling empires that evolved and eventually produced a civilizational identity, the United States was created by enlightened men envisioning a “philosophic empire” as a work-in-progress, with their posterity striving to build a “more perfect union.”

Ironically, while President Trump continues to advocate for a “beautiful” wall, his Chinese counterpart President Xi Jinping has delivered a clear message to the White House that “the wise man builds bridges, the fool builds walls.” Similarly, while visiting Panama last week, Pope Francis also obliquely referred to Trump, remarking that “we know that the father of lies, the devil, prefers a community divided and bickering” by building walls, not bridges.

In his farewell address, President Ronald Reagan invoked John Winthrop’s famous “Model of Christian Charity” in its immortal phrase, a “shining city on a hill” to define authentic Americanism — he further said, “if there had to be city walls, the walls had doors, and the doors were open to anyone with the will and the heart to get here.” Surely the American experience that progressed through the French and Indian War has made this Reaganite idea — as America rose from a union of British colonies into the modern United States — the creed of a global nation. The contrast could not be starker when we consider the shameful “isolationism” embodied in the politically opportunistic slogan of “America First.”

As Congress contemplates the very idea of a wall and the cost of another government shutdown, the representatives of the people ought to remember that we are simply an assortment of transitory guardians with diverse traditions of faith. They must restore the enlightened vision of the founding republic to make American democracy safe for global diversity. The Reagan-like leaders among today’s Republicans should then have the courage to educate Trump with the words of that inspired statesman, who went to Berlin in 1987 and demanded of his Soviet counterpart, “Mr. Gorbachev, tear down this wall.” That is the authentic Americanism embedded in the founding DNA of this enduring nation of immigrants.