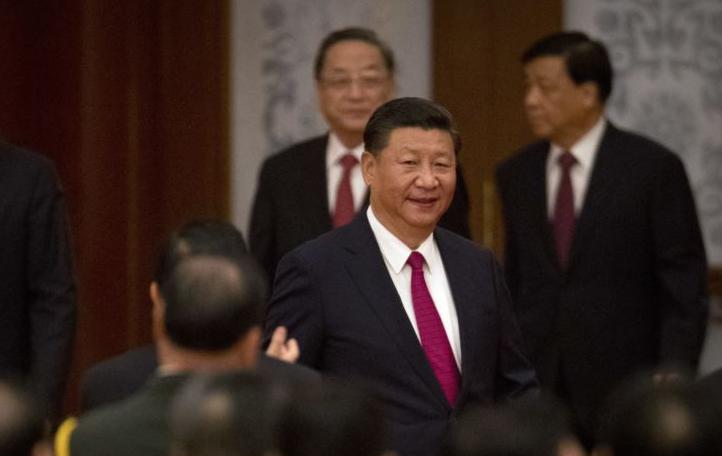 Many have noticed the swell in self-confidence in China’s ruling Communist Party after its 19th Congress, which outlined the goals China will attain in the following five years and drew up a blueprint for the country’s development in the next three decades.

China’s economic growth slowed down, mainly because of decreasing exports after the 2008 global financial crisis. However, it remains a better performer than most other economies. The quality of its economic growth is improving, its resource consumption is falling, and its environment is improving with each passing day. Over the past 10 years, China’s economy has grown 107 percent while the United States only grew 9 percent.

In recent years, China’s per capita income has grown faster than its GDP. The social insurance system has improved consistently, poverty reduction has gone smoothly, government-provided affordable housing has increased steadily, and citizens’ happiness index has kept rising. The improvement of the pension system and the medical insurance system has reduced peoples’ anxiety and led to a rapid increase in domestic consumption. In the first three quarters of 2017, consumption contributed 64.5 percent to the growth of the national economy while the service industry exceeded the primary and secondary industries to become the main force behind economic growth. China is the world’s largest single market; its continuing economic restructuring has rendered it less and less susceptible to outside impact. While the global economy remains sluggish, China’s economy remains tenacious.

Global growth in recent years has been weak. Developed economies like the US, Europe, and Japan are suffering from stagnant growth coupled with social problems and ethnic conflict. To deal with the financial crisis, developed countries used public money to rescue their troubled financing institutions but the consequent increase in debt forced the governments to cut the budget for social welfare. According to statistics quoted by President Donald Trump in his State of the Union address, 94 million people are jobless and more than 43 million out of a population of 320 million live on food coupons provided by the government. In many European countries, the debt crisis has caused serious economic recession and greatly jeopardized the social welfare system.

The US stock market has performed fairly well in recent years, but American companies paid a big price for it. According to reports by a Stanford business journal, Standard & Poor’s 500 companies generally use 54 percent of their profits to buy back their shares to stabilize the share price and distribute 37 percent of the profits as dividends. Only the remaining 9 percent is used for reinvestment and rewarding employees. Therefore, American companies allocate few resources to encourage innovation by their staff and for technological renovation and upgrading.

By contrast, Chinese enterprises have sufficient time, energy, and money to invest in new technologies and encourage their staff to innovate. For instance, Huawei Technologies hasn’t even needed to go public. It only needs to raise money from its own employees whenever it wants capital; its staff will happily buy internal shares because the dividends are fat. That’s why Huawei grew to be the world’s most innovative telecommunications equipment company.

Take patent applications for example, the number of patent applications submitted by Chinese enterprises has been soaring in recent years, outnumbering those by Japanese and American companies. At present, China lags behind the US in terms of the total amount of funds allocated to scientific and technological research. But China’s research budget will surpass the US’ to become the world’s number one by 2020. China has developed many new technologies, which are used widely in society. Many foreign tourists are deeply impressed by the country’s so-called “four new great inventions”, namely its high-speed railway, online payments system, bicycle sharing, and online shopping.

The US hoped to cope with a rising China the same way it dealt with the former Soviet Union by limiting technology exports to China and forcing Europe and Japan to join the embargo, thinking that it could hold back China’s technological progress and thus retard its growth. However, these measures accelerated rather than delayed China’s technological advancement, as a McKinsey study found - the technology embargo stimulated China to invest more in scientific and technological research and development.

In 2003, China planned to buy supercomputers from the US but Washington refused the request, citing national security, believing that China could use supercomputers in weapons development. China had no alternative but to research and produce its own supercomputers. In the end, its Tianhe-2 supercomputer became the world’s fastest supercomputer in 2013. The US discovered that large amounts of US-made chips were used in the Chinese supercomputers and thus took tougher measures to restrict their export to China. In 2017, however, China succeeded in making a faster and more powerful supercomputer – Sunway Taihulight. The chips used in the computer are all made by China.

In the past, Washington forbade NASA from having any contact with China, worrying that China might steal American technology. This year, however, it’s started to encourage NASA to contact China’s space agencies and expressed hope for cooperation. This is because China will launch its own space station around 2023 while the International Space Station built by the US and Russia will expire in 2024. If the US wants to continue its space experiment, it will have to cooperate with China.

In fact, China is very much willing to cooperate with the US. The Chinese government has proposed a “new type of major country relationship,” which advocates no-conflict, no-confrontation, mutual respect of each other’s core interests, and win-win cooperation. These suggestions represent China’s goodwill. Strengthened China-US cooperation will greatly help the recovery of the global economy and make the world better in the next five years or beyond. But if the US sticks to its old mentality of containing China, it will not only fail to retard China’s development but will lose many opportunities of making money and may even slow its own development.