Looking at Earth from Space 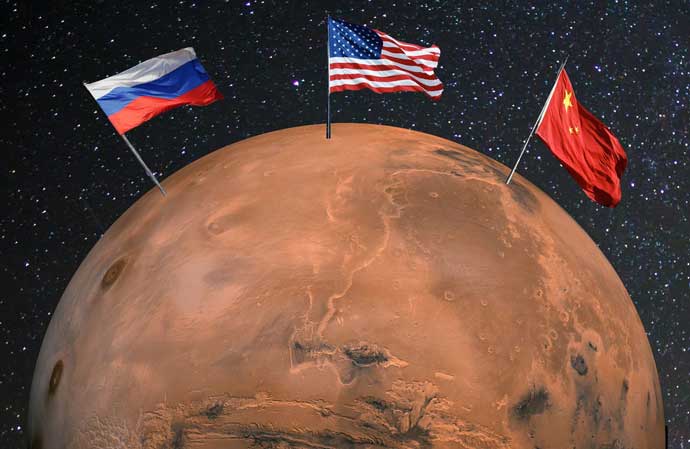 Now is a good time for the US and China to get serious about a joint mission to Mars. Russia is a natural partner, too. The earth, currently embroiled in pandemic turmoil and political delirium, desperately needs to take a bracing look at itself from afar.

By looking at our globe from the heavens, we gain a perspective that puts petty nationalism in its place. Looking at the earth from afar, a beautiful, eye-catching blue-and-green ball cloaked in gossamer veneer of swirling white clouds, is a reminder that we all live on the same finite planet. The boundaries that men kill and die for are not indelibly etched, but barely scratch the surface. Even the Great Wall of China is invisible from space to the naked eye.

A small news item easily lost in the increasingly frantic, negative, and fanatic 24/7 news cycle concerns a call for US-China cooperation in space.

Going against the general tide of media-driven opinion and emotional nationalism, which posits China as public enemy number one, is Charles Bolden, the former head administrator of NASA.

Bolden wants China and the US to cooperate in space, and step number one is to overrule or get around the Wolf Amendment which bars federal funding to any space collaboration with China, effectively barring China from the Space Station. The protectionist legislation, promulgated in 2011 while Bolden was the head of the US space agency, has tied the hands of NASA administrators for a decade now.

The space station would be an ideal environment to practice cooperation and iron out technical incompatibilities. As it did for the divergent space programs of the US and Russia, the orbiting laboratory is a suitably neutral place to bring contending programs closer together, transcending political differences in the spirit of science.

The next obvious step would be cooperation on Mars.

Putting a joint mission to Mars is a gargantuan task, but no less so than going at it alone, because politics can get in the way of science. But for each nation to have its own space program imposes unforgiving costs and deprives the push into space of international camaraderie and the synergy of cooperation.

The history of US-Russian cooperation in space is proof positive that two countries, erstwhile enemies with uneasy political relations, can benefit from cooperation.

Common sense calls for it, and natural science does not recognize national boundaries.

The quest for knowledge has from time immemorial been built on borrowings and exchange, not just the shoulders of giants, as Newton would have it, but hand-in-hand cooperation, too. Isolation, parochialism, and irrational thinking hinder the development of knowledge beneficial to all. Indeed, in times of chaos, armed tension and strife, it is all the more important that artificial but forbidding walls are surmounted, and doors and windows of international perception are kept open.

At this current historic moment of unprecedented presidential bellicosity, when Donald Trump uses the platform of the White House to make racist jabs about China, blame China for all US woes, and threaten to make China “pay,” it is important for saner minds to prevail, for the center to hold.

It’s time for people who see through the craziness of the current moment to speak up for a saner, safer world.

Millions of ordinary Chinese and Americans do so every day, albeit quietly, cherishing the ties that bond and differences that fascinate between cultures, but it is less common in the corridors of power where differences of race and nation are being exploited for crude political benefit.

While at NASA, Bolden was no ordinary pencil-pushing bureaucrat. He is a US military veteran and an experienced astronaut. He flew four missions on the US Space Shuttle, logging 680 hours in space, including a joint Russian mission onboard the Discovery. He served as NASA’s chief administrator for eight years during the Obama administration– so he’s well-versed in the politics of space as well.

He acknowledges that the current US president and congress stand in the way of that happening, but he makes a clarion call for more cooperation, confident that it is the best way forward.

Bolden cites China’s successful soft landing of Chang’e on the far side of the moon as a pioneering accomplishment that everyone can be proud of. It’s not just about China, any more than the July 1969 landing on the moon “for all mankind” was just about America.

Speaking to China Daily reporters, Bolden expressed the hope that the US and China would cooperate in space, but for that to happen, political protectionism needs to ease.

Bolden has long struggled against the politicized legislation of the Wolf Amendment, calling it a "significant legal constraint" and "hindrance" to joint US-China space should be “relaxed or reversed.”

What’s more, time is of the essence.

National space programs cannot be instantly integrated, if only because the go-it-alone ethos has led each nation to develop some unique features and idiosyncratic standards, but such technical challenges can be bridged. The Shenzhou, inspired by the technology behind Russia’s Soyuz craft, has no easy way to dock at the American port on the space station but could be adapted to dock at the Russian port thanks to the similar technology.

After the Space Shuttle program was retired in 2011, the US lacked launch capability for sending crews into space and for almost a decade had to rely solely on “getting a lift” by Russia’s Soyuz capsule to transit space and earth.

It’s a testament to the value of international cooperation that the sturdy Soyuz capsule, launched atop powerful Russian rockets based at the Baikonur Cosmodrome in Kazakhstan, made it possible for Americans to access the American-built space station.

Undeterred by its years in the Wolf Amendment wilderness, China has pressed ahead, developing its spacecraft and developing plans for its own space station. Named Tiangong, or Heavenly Palace, China’s space station is expected to be up and running around 2022. The timing is critical because the US-built International Space Station, while a technological wonder, is getting creaky and is due to be retired in 2024.

If the US station is mothballed and the Chinese space station does not proceed as planned, there may no longer be any space station left for the world’s scientists to work on.

What’s more, how can the extremely complex and dauntingly expensive mission to Mars be contemplated if nations don’t pool resources, ingenuity and knowledge?  For Mars to happen– if it is ever to happen– cooperation has to take place on earth first.

"Who thought Nixon would ever go to China?" Bolden slyly asked his Chinese interlocutors. Perhaps the question puzzled them. While the “Nixon-in-China” meme has long been a shorthand way for Americans to say it’s time to think out of the box, the phrase takes on a new, ironic meaning in the present context.

Nixon succeeded in bridging the then-formidable political chasm between the US and China by boldly making a trip to Beijing.

Now the challenge is to bridge the widening gap between the US and China by boldly joining Beijing to make a joint trip to Mars.