Opening and Closing Valves of Labor Pressure in China 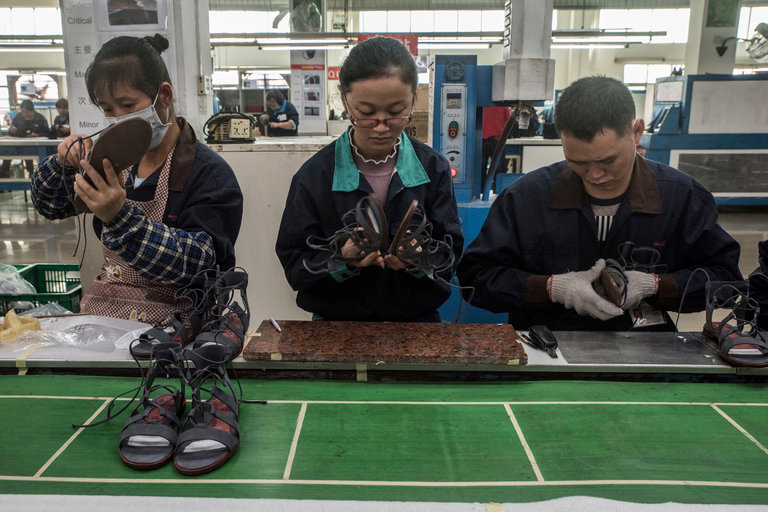 Trump put China onto the front pages again recently. Not Donald, but Ivanka, whose brand was bruised when China detained several worker activists who were investigating working conditions at a factory that produces Ivanka Trump shoes. The Trump connection drew unusual press attention to the story, and it might have drawn the attention of the activists’ organization, China Labor Watch (CLW), to this particular factory as well.  Unfortunately, there was nothing very unusual either in the poor labor conditions that the activists were investigating, or in their detention.

Let’s review:  After the post-Mao “reform and opening” of China’s economy in the early 1980s, hundreds of millions of poor rural migrants entered the global labor force, and filled the Dickensian factories that supplied Western consumers with much of their clothing, footwear, toys, and consumer electronics.  For a few decades China seemed to epitomize the much feared “race to the bottom” in global labor standards.  Candidate Trump made China a co-culprit, along with poor immigrants to the U.S., in the decline of American jobs and living standards.

But the China story was more of a “race to the rising bottom,” for real wages in China increased ten-fold during the first decades of capitalist-driven development. With Chinese labor no longer so cheap, some low end manufacturing work has flowed to even poorer countries, mostly in Asia.

Rising wages stem from several factors, including the labor shortages that followed the entry of the “one-child” generation into the labor force.  More than the forces of supply and demand are at work; the government has deliberately intervened to raise minimum wages and other labor standards and to improve channels for their enforcement.  Those policy interventions were partly a response to the noisy demands of Chinese workers, and the government’s anxiety that widespread grievances and episodic outbursts of unrest might otherwise coalesce into something much more dangerous: an independent labor movement.

When I first began studying China in 2009, after decades as a labor law scholar in the U.S., I was struck by some trends – rising unrest and strikes, a surge of union organizing (by the official Party-controlled union), and a raft of labor reforms – that faintly echoed the American New Deal. Back then, a swell of organized labor agitation helped to spur the enactment of both higher minimum labor standards and federal support for union organizing and collective bargaining.

But things are sure to go very differently in China. While its leaders hope to replicate some of the results of our New Deal labor reforms – decades of prosperity, greater economic equality, and stability – they are irrevocably opposed to the political freedoms and democratic institutions, including the independent trade unions, that brought about those New Deal reforms. As I argue in my recent book, A New Deal for China’s Workers?, the specter of an independent labor movement, which the regime sees as an existential political threat, plays at least as central a role in China’s labor policies as the actual independent labor movement played in our New Deal.  That specter both drives and constrains every facet of China's labor policy, both its reforms and its use of repression.

So while the fear of independent labor organizing has helped to motivate the regime to deliver reforms – improved labor standards and minimum wage increases – it also constrains the shape of those reforms. In particular it ensures suspicion or hostility toward any kind of collective action by workers or their advocates – even collective efforts to enforce official labor standards.  That hostility was evident in the recent detention of CLW activists, who had compounded their offense by working with a foreign advocacy organization.

The fear of independent labor organizing has also ruled out the kind of structural reforms that would be required to make real collective bargaining possible – that is, either democratizing the official union structure or allowing workers to form their own unions outside that official structure. That fear seems to have stalled even very modest reform efforts, much discussed in the wake of the 2010 Honda strikes, that would enable workers to elect responsive leaders of enterprise-level trade union chapters.

The fear of independent labor organizing has not only constrained reform efforts in China; it has also spurred repression. Ordinary strikers are rarely arrested, for that would risk triggering an escalation and a politicization of conflict. But the handful of intrepid worker advocates whose open activism extends beyond the boundaries of a single factory risk detention or arrest on amorphous charges like “inciting crowds to disrupt public order.” A wave of detentions in 2015 targeted activists who had appeared at the scene of multiple strikes – even though the activists, far from fomenting strikes, were trying to channel disordered turmoil into constructive bargaining.

The suppression of leadership and organization ensures that labor unrest remains chaotic.  China’s leaders are thus stuck in a seemingly unsustainable cycle of ad hoc “firefighting” responses to strikes. But that is far preferable in their view to allowing workers to organize outside the auspices of the Party-state and its official union. China’s leaders fear organized mobilization far more than they fear chaotic unrest. And that fear shapes both reform and repression; it both motivates and constrains both halves of the regime’s labor equation.

Can China’s leaders get past the current period of rising – yet localized and non-political – labor unrest without going down the time-tested road of collective bargaining through independent trade unions? I do not know, but I am sure they will try.  The current leadership – and the overwhelming majority of Party elites that share the goal of ensuring stable one-party rule for the foreseeable future – will do almost anything before they go down that road of allowing independent labor organizing.

China’s leaders draw on an increasingly sophisticated toolkit in their effort to quell and contain both labor conflict and independent organizing. By adroitly opening and closing pressure valves on conflict, they aim to keep unrest from boiling over while staving off major political change.

If China’s leaders have their way, and if the economy cooperates, China’s workers will continue to enjoy steady improvements in wages and material working conditions. That would serve both political interests in legitimacy and self-preservation and whatever genuine interest in workers’ welfare animates the regime. But if China’s workers are to also gain the ability to speak and act for themselves through institutions and leaders of their own choosing, they have a long, hard road ahead.

Cynthia Estlund is also the author of A New Deal for China's Worker.

China laborChina’s Social Reform
printTweet
You might also like
Back to Top
CHINA US Focus 2023 China-United States Exchange Foundation. All rights reserved.