China Increasing Agricultural Production on a Sea of Plastic 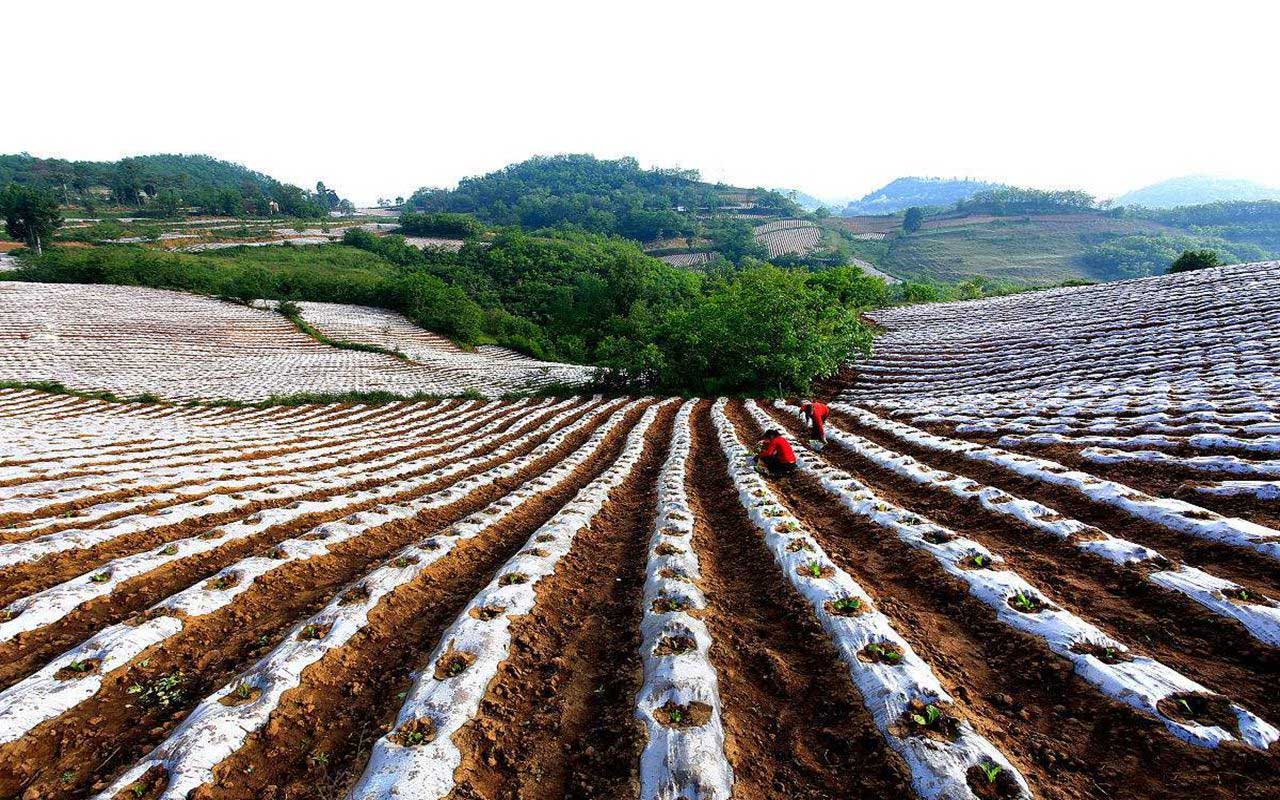 I saw plastic greenhouses as far as the eye can see from the train, as I traveled across Shandong Province to visit the Shandong Academy of Agricultural Sciences.  Ninety percent of the world’s plastic greenhouses are in China covering 3.3 million hectares, about the area of Maryland, and Shandong has the most.

Visiting these greenhouses with my Shandong colleagues revealed their unique design with a thick earthen or brick north wall to provide insulation from the wind and plastic stretched over steel poles to cover the top and south side.  Inside Shandong’s greenhouses are a cornucopia of fruits and vegetables making it number 1 in China’s vegetable production and in fruit production. Using greenhouses doubles yield and extends the growing season, improving the lives of Chinese farmers and bringing many out of poverty as they are able to produce more food on less land. For farmers in Binzhou City in northern Shandong Province, one greenhouse covering 0.13 hectares (1/3 acre) can generate 80,000 to 100,000 RMB annually (average annual farmer income is 12,363 RMB). Binzhou has 330 greenhouses covering the area of 286 football fields.

The thick plastic greenhouse sheeting, however, does not work forever. Long exposure to UV light starts to break down the plastic.  After 3 years it needs to be replaced. So, what happens to all that waste?  China is not alone in dealing with agricultural plastic waste, known as “white pollution” – U.S. farmers also use plastic, generating 816 million pounds of plastic waste annually.

Plastic mulch – a blessing or a curse

With one fourth the farmland of the U.S. to feed four times the population, China must get the most from every hectare. China is the world’s largest user of plastic film mulch. The mulch blocks weed growth, reducing the need for herbicides and protects the soil from erosion.  The plastic also helps warm the soil and conserves water.  While Shandong is in the top five provinces growing crops using plastic mulch, it is surpassed by the cold, arid Xinjiang Province which gets only 50 – 600 mm (2 to 24 inches) of precipitation annually, similar to North Dakota. The benefits of plastic mulch are significant, increasing yield and water use efficiency by about 25 percent and supports farming in areas that were too dry or cold to grow food.

All of the benefits of growing crops under plastic have a dark side, because it is dirty and hard to recycle, it is generating a mountain of plastic waste.  Agricultural plastic mulch use started in the 1980s.  Current use in China is over 2 million tons of plastic covering 200,000 square kilometers, like covering every inch of Nebraska with plastic mulch.

Mulch is much too thin

The plastic mulch used in China is as thin as plastic wrap, only 4 to 8 microns - a  zip lock bag is 38 microns.  The thin plastic easily tears, so it is only used for one growing season and is almost impossible to pick up.  The thin shreds, flakes and balls of plastic stays in the soil or is washed away into streams on the way to the ocean. Flakes of plastic caught up in animal feed is ingested by livestock.

In the United States, farmers use thicker and stronger plastic mulch, from 15 to 50 microns. While the weight and cost increases with thickness, the thicker film can be picked up and reapplied so it can be used for at least 2 years. Gathering up plastic mulch in the field is a dirty and laborious job, so the U.S. agricultural industry is developing new machines to lift and roll up used plastic mulch.  Getting the plastic out of the field is the first step to reuse, recycling or safe disposal.

Soil, stuck to the plastic mulch, makes up half of the plastic’s weight. The dirt damages the recycler’s shredding machines, making it difficult to recycle. Plastic that is too dirty for recycling is piled up and burned in the field.

Initial steps to recycle agricultural plastics in the U.S.

Right now, the U.S. has no policies to require or encourage recycling agricultural plastics.  Programs are voluntary and limited by market demand for recycled plastic. However, some are finding ways to collect and recycle plastics used in agriculture. Plastic irrigation tubing is relatively clean and easy to collect. A California plastic irrigation tubing producer is closing the circle and now collects used tubing.  After it is shredded, washed and pelletized, it is made into new tubing.

The Missouri Botanical Gardens, in St. Louis collects and recycles plastic flower pots, trays and cell packs from landscapers and home gardeners.  Each year they keep 350,000 pounds of plastic out of the landfill.

The Agricultural Container Recycling Council since 1992, has coordinated recycling of chemical containers across the U.S.  In 28 years, the Council has recycled 200 million pounds of pesticide jugs and drums keeping them from filling up hazardous waste landfills. The high-density polyethylene (HDPE) is recycled into agricultural drainage tile, fence posts, pallets and nursery pots.

Plastic mulch remains the biggest recycling challenge, because it is wet and dirty.  Recycling programs throughout the U.S. come and go.  The few programs to help farmers, like those in New York and Florida, collect the mulch but have struggled to find a market for the plastic. Gene Jones of the Florida Agricultural Plastics Recycling Cooperative shared “At this time, not much is moving with regard to ag plastics especially mulch film. We do have some market for drip tape and cleaner greenhouse films but that is about it.”

In December 2019, Chinese Ministry of Ecology and Environment and the National Development and Reform Commission proposed new regulations to reduce the agricultural plastic problem.  The regulations would require the use of higher quality, thicker mulch that can be reused, collected and recycled.  Right now, of the 2 million tons of plastic mulch used in China, only 180,000 tons is being recycled.  In 2018, China stopped importing plastic waste from foreign countries and is prioritizing domestic recycling.  According to Chen Liwen, founder of Zero Waste Village “if mulch and ag packaging are profitable to be collected and recycled, it will be recycled.  But in most cases, mulch, the extremely thin PE [polyethylene], is dumped in drainage pits, burned or just left in soil.”

Agricultural plastics have transformed China’s agriculture and the lives of farmers.  It is unlikely that the use of plastics will be abandoned.  Research is underway to develop biodegradable agricultural products.  The Ohio State University, for example, is developing plant-based plastics that degrade in 45 days. Chinese scientists are also developing plant-based plastics, but right now but they are still too expensive for widespread use.  The current focus is on improving the ability to gather, reuse, recycle and safely dispose of agricultural plastics. If things do not change, in the words of Liu Enke from the Chinese Academy of Agricultural Sciences, plastic use in agriculture will move from a “white revolution to white pollution”.