China’s Cap and Trade in the Trump Era 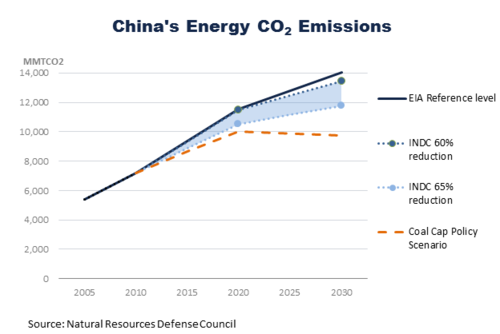 In 2014, President Obama and President Xi announced the China-U.S. Joint Announcement on Climate Change, which committed the two countries to reducing greenhouse gas emissions towards the global temperature goal of 2℃. Many believe that the partnership between the world’s two largest emitters paved the way for the landmark 2015 Paris Climate Agreement.

However, the Trump administration denies human-driven climate change and withdrew from the Paris Agreement in June, 2017. The decision led to anger and anxiety across the world. Though China immediately reassured the international community about its continuous commitment to the Paris Agreement, many are uncertain whether China can assume the leadership (with the EU) to combat climate change, especially when reducing carbon emission is at odds with its economic growth.

A closer look at China’s plan reveals a much more nuanced picture. China has reaffirmed its schedule to launch the world’s largest “cap-and-trade” market for carbon emission permits in 2017. This national carbon market is expected to lower the cost of emission reduction, as China strives to fulfill its Paris pledge of peaking carbon emission by 2030. A successful carbon market may even enable China to achieve this goal earlier, which is especially desirable given the U.S.’s withdrawal from the Paris Agreement.

In contrast to the conventional belief, reducing carbon emissions is generally consistent with China’s domestic and global agenda. Without any major technology breakthrough or political turmoil, it seems unlikely for China to halt its national carbon market plan. China faces increasing domestic pressure to clean up its polluted air and waters. Even with a slowing down economy, China overtook the U.S. as the world’s top oil importer last year. It is thus not difficult to understand why China maintains “energy conservation and emissions reduction (Jie neng jian pai)” its chief policy goals. Aside from the political and energy security benefits, the carbon market will also foster the synergy between de-carbonization and China’s strategic shift towards knowledge-intensive and green industries. In fact, over the last fifteen years, China has already made unparalleled investments in new energy technologies such as wind and solar power. Constructing a well-functioning carbon market would only help achieving China’s environmental, energy security, and long-term economic growth goals.

In addition to domestic political and economic benefits, the global leadership vacuum created by Trump’s policy positions presents an opportunity for China to prove itself as a stable and cooperative partner to the rest of the world. As China fulfills its climate commitments, the EU will likely continue its technological and financial assistance to China to improve energy efficiency and develop green industries. More importantly, international cooperation on environmental technology and green industries may help China’s global reach for markets and resources. The $3.1 billion “South-South Climate Cooperation Fund,” China’s independent contribution to global climate finance announced in 2015, gives China a central voice in South-South Cooperation. The China-led Belt and Road Initiative marks Xi’s ambition of releasing the potential benefits from mobilizing infrastructure, trade, and investment across Eurasia and Africa. At the minimum, becoming a climate leader builds the goodwill in international negotiations that Chinese firms can profit from.

Still, it is debatable how successful China’s cap and trade will be due to the uncertainty in the Party’s political will and the technical challenges in establishing a national carbon market. The Chinese government has given economic growth the top priority since the 1980s. When it comes to building a carbon market, the Party’s political will to motivate the cadre and discipline many powerful industries is surely subject to economic considerations. From the last two Five-Year Plans to the Copenhagen Accord and the Paris Agreement, China’s commitments to emission reduction have always been defined relative to GDP (lower emission per unit of GDP), rather than in absolute volumes. It came as no surprise when the EU refused to support China’s market-economy status under the WTO rule in June, Premier Li Keqiang decided not to issue a joint China-EU communique on shared commitments to combat climate change.

Therefore, one should expect that the Chinese government will set the carbon emissions cap in the way so that it does not significantly burden the overall economic growth. Nevertheless, for local officials, as GDP growth target remains one of the most critical performance metrics, those in areas more affected by the carbon cap would not hesitate to delay, manipulate, or even boycott carbon trading if costly emission permits become a threat to their political future.

Though China has launched seven municipal and provincial carbon trading trials since 2013, building a national carbon market remains challenging, especially given that almost all trials are located in the more developed regions of China. The local pilot systems have indeed revealed multiple problems, some of which (such as the lack of effective monitoring) seem extremely tough. Assembling baseline information across provinces and sectors has been particularly difficult, posing a direct barrier to the expansion from pilots to national implementation.

These challenges prompt the scope of the national carbon market to decrease from eight sectors to perhaps only three to four sectors (power, cement, aluminum, and possibly aviation) in the first phase. The significantly reduced scope (the four sectors account for roughly half of the total national emissions) does make building the national market easier. However, doubts remain. Will the market design reflect lessons learned from the European and California carbon trading systems? Will local and industry protection interfere with data collection and emission monitoring? Will the carbon audit agencies produce data that are more reliable than the often criticized environmental impact assessments?

Unlike pollution abatement, where the rising public pressure helps make officials accountable, the carbon market is almost entirely a top-down endeavor. Without a proper incentive structure, the central government will have a hard time battling local official’s information advantage. The rules regarding the use of the revenue from permit auction and the distribution of emission allowance among the trade-exposed sectors would have to be carefully devised and paced to suit the Chinese context.

Given political uncertainties and technical challenges, China’s carbon market might fail to meaningfully reduce emissions. In that case, to fulfill its commitment in Paris, China will have to resort to the familiar non-market command-and-control policies, except that the cost will be higher compared with a functional carbon market. While state-owned enterprises dominate the proposed carbon trading sectors it seems unlikely that China will fail to establish a carbon market of limited scope as long as the political will is there. On the other hand, it is hard to gauge the eventual coverage and ultimate effect of the national carbon market.

Assuming China maintains the same institutional and growth trajectories after the Party’s 19th Congress this fall, a national carbon market should launch as planned by the end of year. The next few years will be crucial for the world’s largest carbon emissions scheme to improve and hopefully succeed. The Trump administration may largely be absent in the global effort to stem climate change. Though the EU is an enthusiastic supporter for the carbon market in China, potential trade disputes between China and the U.S. or the EU can certainly affect China’s interest in making its carbon market as successful as possible.