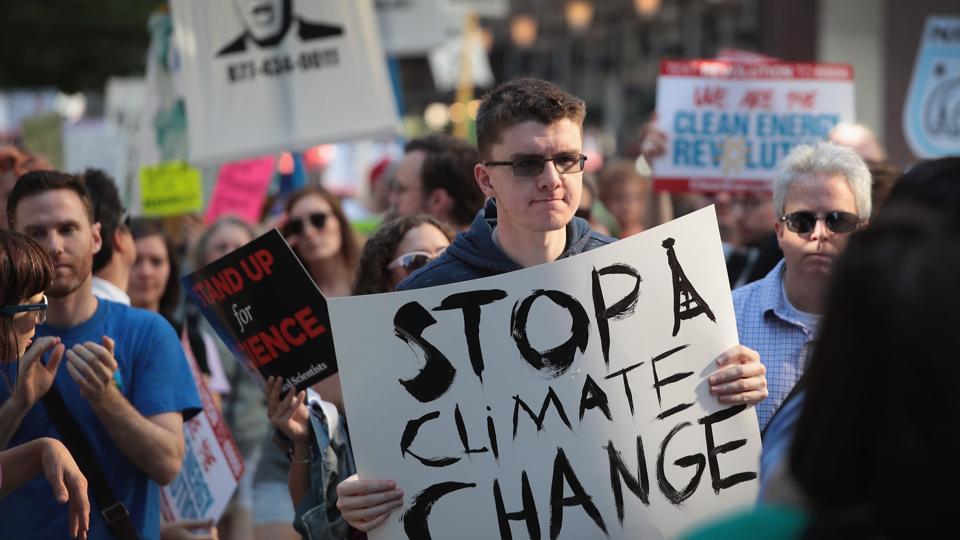 On the day that the United States withdrew from the Paris Accord, China and the EU jointly declared that they would continue to “lead the energy transition” and redouble their efforts to meet the Paris targets. Once scapegoated as the enfante terrible of the Copenhagen climate negotiations, the chance for China to be seen as the adult to America’s terrible child is a particularly rich irony. Seldom does the international stage afford such rapid reversals.

What does it mean for the United States to have ‘ceded leadership’ on a non-binding treaty where the collective emissions reduction commitments made by the parties don’t meet that agreement’s stated goal of limiting emissions global temperatures to between 1.5 and 2 degrees Celsius? Former U.S. State Department negotiator Andrew Light has worried that America’s abrogation will lead to monitoring and verification falling off the agenda of the international negotiations. American support for strong monitoring and verification would have been critical in an international climate regime where traded carbon pricing was used to incrementally draw down emissions, or where trade penalties were levied against countries who did not meet their targets. But these policies belong to a bygone dream of binding treaties and early action, left behind in the last century, before humanity emitted hundreds and billions more tons of carbon dioxide into the atmosphere and signed the Paris Accord.

We have moved beyond the period in our natural history when a gradual energy transition, the kind brought on by slowly rising carbon prices, could be consistent with a two-degree future to which Paris aspires. Collective inaction has eroded nuances; the question of climate leadership is now easily exposed through the examination of large questions—is a country directing its industrial policy at the level of trade, technology and investment in a way that is consistent with a two degree future--or not?

From this standard, progress and political leadership cannot be determined merely in the examination of country’s emissions trajectory, which has been altered in the United States and China by economic and technological forces, acting independently of political leadership. In the United States, hydraulic fracturing and directional drilling technology have opened previously uneconomical reserves and provided cheap, domestic natural gas that has led to a steep drop in the United States’ emissions since 2005. This came about not by way of political leadership, but rather from the innovation of a well-heeled incumbent industry. Unconventional fossil fuels are central not just to America’s falling emissions, but also to its future climate policy. The contradiction is that to stay within the threshold of two degrees of warming, the world must leave existing fossil fuel reserves untouched, not develop the technology to reach new carbon reservoirs previously beyond the reach of mankind.

The United States’ claim to climate leadership stemmed from the development of the Clean Power Plan and the passage of the Paris Accords. But in setting both the intensity targets of the Clean Power Plan and the emissions reduction targets in the Paris Accords, which use an inflated baseline of 2005 emissions and commit to deep reductions only by 2050, the United States designed a policy that secured natural gas’s domestic market long enough not to threaten anyone’s payback periods or  political horizons

This contrasts sharply with Germany’s aggressive near-term targets for a  2020 target of a 40 percent reduction from 1990 emissions. Germany is able to aspire to this target because it made strong policy decisions years ago that have transformed the shape of its energy infrastructure, rather than letting its energy infrastructure transform the shape of its policy. Ten years ago, Germany put in place twenty-year feed-in tariffs at a price that would ensure profitability for renewable energy developers. The result is that wind and solar generation make up 45 percent of Germany’s installed capacity, and renewable energy makes up 30 percent of annual power generation.

Germany installed this capacity at a time when renewable energy was expensive, and the public has paid for this decision through higher renewable energy bills, acting as a loss leader for the rest of the world in bringing down the prices of green power. The world is now enjoying the benefits via commercially competitive solar and wind energy. China, in particular, benefited by being able to develop a solar industry on the strength of German demand. In the international climate negotiations, the idea that wealthy countries should pay for the development and commercialization of low-carbon technology seldom exits the realm of discussion. The actions of Germany have been an exception.

But the United States is also exporting the fruits of its carbon emissions revolution. Oil exports in the United States have increased by a factor of ten in the last decade. The same drilling technology that brought down American emissions has also made the United States the world’s largest producer of oil and gas. And like Germany’s solar fixation, American industry’s interest in unconventional fossil fuels has also spread. Chinese state-owned companies are heavily invested in U.S. domestic oil shale as well as other unconventional fossil fuel development around the world. This trend has accelerated, even as the Chinese government invests in renewable energy. Further, the Chinese government has proved willing to buy, develop, and even expand on American drilling innovations to access marginal reserves, even at a loss. Just last month China claimed success in a trial for mining methane hydrates from the sea floor. Methane hydrates are an immense and unstable fossil fuel reserve that should be left untouched if we are to avoid the four-degree future towards which we are currently headed.

Like the United States, China’s falling emissions have been aided by renewable energy expansions, but are more a result of economic forces that would have existed in the absence of government effort. China’s recent dramatic drop in coal use and cancellations of coal fired power plants owe far more to an economic slowdown and to adjustments for overcapacity in the power sector than to clean energy development. But of course other countries also bear some responsibility for China’s emissions. In talking about declining emissions in the United States from 2005, it would be remiss not to mention that between 2005 and 2016 the trade deficit for goods between the United States and China expanded $140 billion dollars. Put another way, if the United States owned its emissions from the consumption increases that have fueled its last decade of economic growth, this would cancel out about half of the fourteen percent reductions that it has achieved since 2005.

If this is what climate leadership looks like, China has taken note. Its 2030 Paris target is a reduction of emissions intensity to GDP of 60 to 65 percent of 2005 levels. While China plans to grow its zero-energy generation (including nuclear) to meet this goal, the bulk of its gains will come from increasing personal consumption as a percentage of its GDP, and shifting of industrial production. Meanwhile, in 2016 alone, Chinese development banks invested $6.5 billion in coal infrastructure overseas, mostly in neighboring developing countries. In the future, emissions will be elsewhere.

While China and the United States have bent down their emissions curves, neither has a history of pursuing or a record of committing to strong climate policy. Environmental advocates often talk about the symbolism of Paris. Presumably, the leader’s symbolic actions allow for society to imagine new possibilities for the future. For Paris, the hope is that symbolism will, in time, translate into substance. This logic ignores the reality that when it comes to a two-degree future, time has run out. If China wishes to lead the world to two degrees, it should follow Germany’s example. The last three decades have expanded China’s emissions, but they have also expanded its wealth and power enough that it is in a position to make this choice, and probably even at a profit. It would be a pity if it chose to model its new climate leadership on the United States instead.

Paris’ Climate SummitChina Environment Protection
printTweet
You might also like
Back to Top
CHINA US Focus 2022 China-United States Exchange Foundation. All rights reserved.