China During the Global Food Crisis

As Russia blocked vital fertilizer exports leaving Ukraine unable to export grain, China also instructed domestic firms to stop exporting crucial fertilizer to other countries in order to save resources for domestic use. China’s choice to stop fertilizer exports has effectively put additional pressure on global markets and trade during a period of increased macroeconomic stress. However, this is no surprise, since domestic demand grows, and China still maintains good relations with nearly all food exporters. Despite its careful choices to manage global shortages while feeding domestic demand, China’s choices have become more important than ever.

China’s decisions, especially during periods of such geopolitical stress, carry vast consequences, and provoke criticisms from nations in the G7 who are often critical of Beijing’s statist approach to exports and domestic production and subsidies. China’s influence of global food security is equally important, as its choices will also either help or harm supply on an international scale.

The war in Ukraine has affected the prices of minerals and hydrocarbons, but also food, as Ukraine and Russia once served as Europe’s breadbasket. Now, due to blockades and shortages, the global food supply is strained, and as countries impose policies that favor domestic production and tightened exports, international supply chains suffer even further. 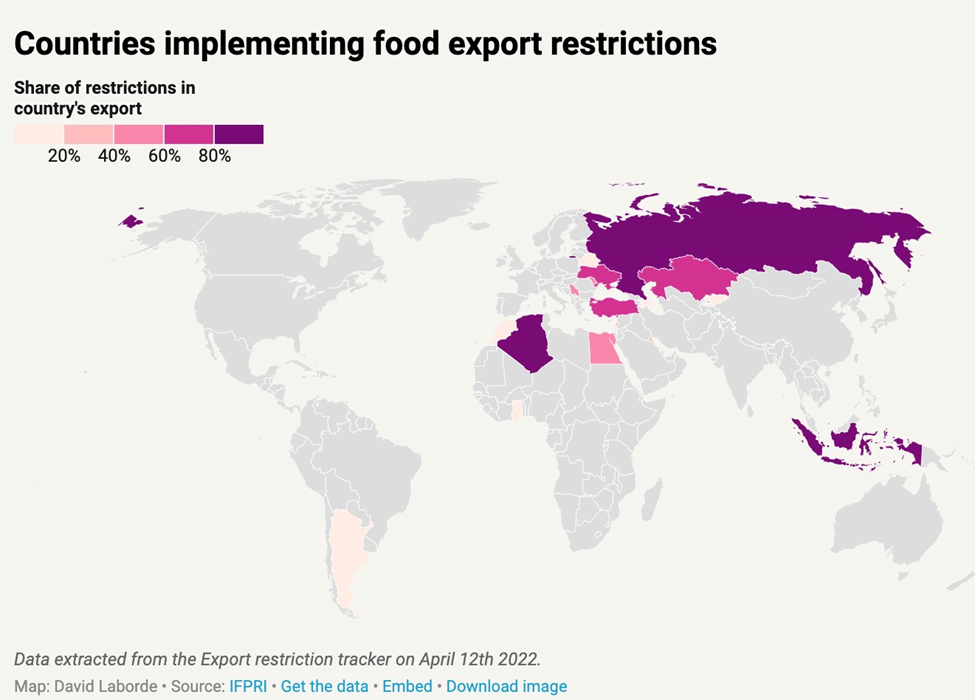 As we can observe from the graphic above, China’s import stress as a result of global export restrictions are fairly low. However, China’s coronavirus lockdown and ban on food exports has contributed to global food instability. Making matters worse is the global fertilizer shortage, which is also directly related to restrictions in Ukraine and Russia. This has a negative impact on global yields. The UN Food and Agriculture Organization predicted that food prices would increase by about 20 percent due to the combined effects of the war in Ukraine and the Chinese coronavirus-related lockdowns. However, it is worth noting that even before the Russian invasion of Ukraine, the World Food Program warned that 2022 would be a terrible year due to the heatwaves affecting India and China, which are the top two global wheat producers.

The main issues affecting Chinese production are floods throughout China which have hurt both yields and logistics. These issues drove up the prices of noodles, which hundreds of millions of consumers across the globe buy regularly. Noodle prices were additionally driven up by energy and transport costs, which also got passed onto consumers. In China, the world’s largest consumer of noodles, food inflation is continuing to rise at the quickest pace in almost two years after large cities such as Shanghai opened up after lockdowns. Further, it is estimated that Russia’s invasion of Ukraine took 30% of global wheat exports off the market almost overnight. According to the World Instant Noodles Association, there are 290m servings of instant noodles eaten every day, which means 106.4bn servings a year.

In addition to noodle production, the global sugar supply is also under pressure. As many countries limit their sugar exports, China’s agricultural ministry has cut its forecast for domestic sugar output in the current year. Though the world's least developed countries are likely to be hit hardest by higher sugar prices, China's sugar output is tipped to be lower than expected this year, meaning more imports will be needed to meet domestic demand. China is one of the world's largest sugar producers, but still relies on imports for around one third of overall supply.

The largest Asian beef consumers are China, India, and Japan, which are also planned to increase consumption. Pork production in Asia is also increasing with demand, while aquaculture is the biggest source of fish or human consumption. China leads fish production, though production has been increasing in India, Indonesia, Vietnam, and Thailand. The resources necessary to boost beef, pork, and fish production require components from corn and soybeans, which are also under stress due to recent geopolitical events. Ukrainian exports to Asia mostly went to China, South Korea, Vietnam, and Bangladesh before the war. However, this will decrease as a result of the war. Further, China, Kazakhstan, Mongolia, South Korea, and Vietnam were the most vulnerable nations with respect to Russian and Ukrainian corn experts. China, South Korea, Kazakhstan, and Uzbekistan are also significantly dependent on Russian soybean exports. However, China has been wise to implement a dual strategy to diversify food imports and increase domestic production at the same time.

The current situation reveals that many countries in Europe, but also Latin America, the Middle East, and Africa, will suffer significantly as we approach worse food shortages. However, the greater concern is that most of the emerging economies have decent or positive relations with grain exporters like Russia, while the Western nations have severed their relationships with Moscow. This will create a global geopolitical divide in terms of where food exports will go, and who will dictate the volumes of exports that circulate around the globe. China will benefit from the low logistical costs on imports from places like Russia and Kazakhstan while some European nations will not be so lucky. 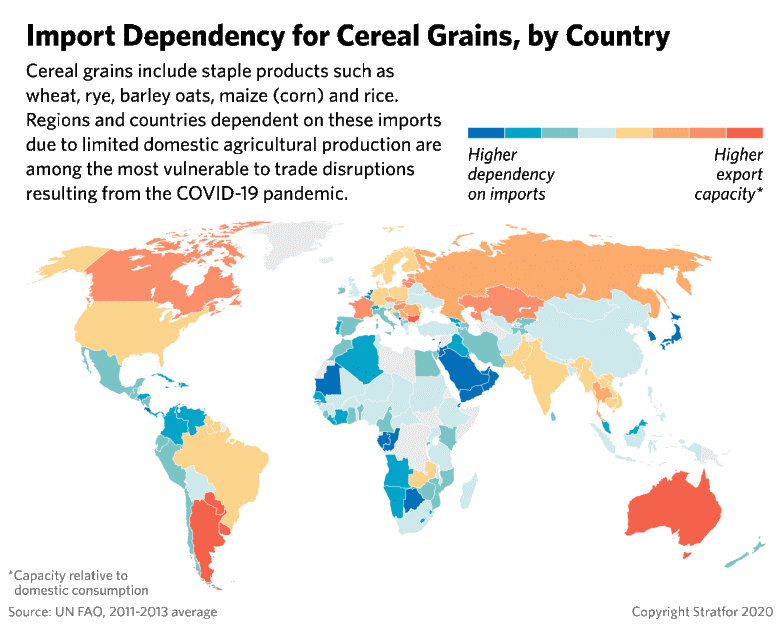 Green EconomyUkraine CrisisRussia Sanctions
printTweet
You might also like
Back to Top
CHINA US Focus 2023 China-United States Exchange Foundation. All rights reserved.