Donald Trump and the Rule of Law: Sending the Wrong Message to Chinese Investors 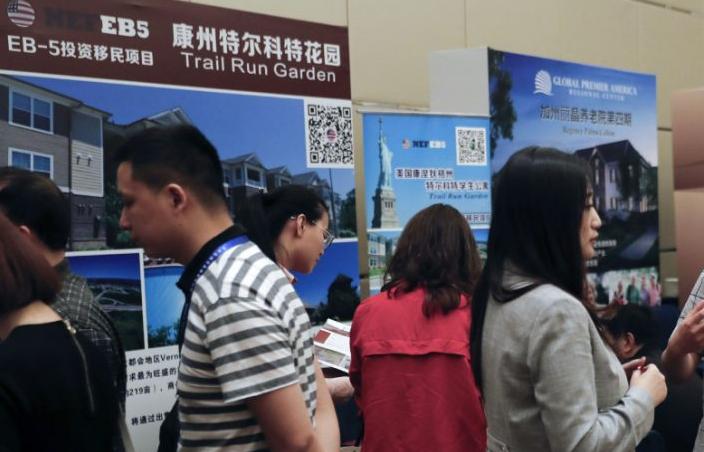 Visitors chat as others seek information of the U.S. government's EB-5 visa program at the exhibitor booths in a Invest in America Summit, a day after an event promoting EB-5 investment in a Kushner Companies development held at a hotel in Beijing on Sunday.  (ANDY WONG / THE ASSOCIATED PRESS)

On June 18-20, the U.S. Commerce Department will host a meeting designed to attract foreign investors into the United States. The U.S. remains the largest recipient of such investment, given its large middle class and wealthy population. But investors today have many options regarding where to invest, and other countries look increasingly more stable and better managed. Moreover, foreign investors see growing evidence that under President Donald Trump, the “rule of law” is declining in the U.S. Chinese investors who have long seen the U.S. as a stable growth market may well reconsider.

In countries with strong rule of law, government officials and agents, as well as individuals and private entities, are held accountable. Laws and regulations are clear, publicized, stable, and just, applied evenly, and protect fundamental rights. Policymakers enact, administer, and enforce the laws and regulations in an accessible, fair and efficient manner, while the court system provides a timely and even-handed approach to justice.  Market actors know that although policies may change, these norms of good governance will persist. Thus, in the U.S., corporate investors presume that they will not be discriminated against because they hire Muslims, favor climate change accommodation, or choose to move their operations overseas.

President Trump has used his words and actions in ways that undermine confidence that companies and individuals will be treated in a transparent, equitable, and accountable manner. In early December, Trump stressed that rather than applying the same tariffs to all companies, he would use punitive tariffs to punish some companies that source overseas.

First, under the Constitution, trade policymaking is a shared responsibility between the executive and legislative branches. Congress has not indicated that it wants to single out specific companies for their production and employment decision.  Hence, this approach is undemocratic, undermines longstanding U.S. mores of evenhandedness, and violates trade commitments under the WTO, the international trade organization created by the U.S. to discipline such practices. While it is laudable that the President wants to preserve jobs, executives may hear that the Trump Administration will act in an arbitrary or discriminatory manner.

Secondly, Trump-affiliated companies are not modeling positive behavior. Trump subsidiaries and licensees make eye­glasses, perfume, cuff links and suits in Bangladesh, China, Honduras and other lower-wage countries, not in the U.S. Executives may read into his actions that he is above the law and not fully committed to his own policies. In a similar manner, Trump’s refusal to put his family’s assets in a blind trust or to be fully transparent about his taxes or investments signals the wrong message about the rule of law. Without a blind trust, he risks conflicts of interest and raises questions about whether executive branch decisions are made in the public interest or the interest of his firm or cronies. Executives may read into this behavior that it is okay to have such conflicts of interest.

Moreover, the U.S. may find it hard to promote good governance overseas when our new president’s approach to governance is opaque, unpredictable, and unaccountable. Trump signals that his interests take precedence over the public’s right to know or the interests of other investors, who will not have the same access he and his family have to make good market decisions.  Here again, his actions convey that the U.S. will not adhere to the same levels of transparency, accountability and evenhandedness investors have long expected.

Trump’s executive order on immigration provides another example of his failure to act in an evenhanded manner. The President did not widely consult with immigration experts and agencies; his administration did not consider that many American firms employ individuals with green cards from many of the countries he targeted. The general counsel of Microsoft, Brad Smith, noted that the company was led by an immigrant and had some 76 employees blocked from entry to the U.S. for 90 days under the executive order. Meanwhile, top officials from Apple, Facebook, and other companies also spoke out against the order noting that it may undermine the Constitution’s long-standing principle of nondiscrimination among individuals of different religions.

The Trump Administration has also discounted transparency, helping to end rules promoting transparency in the extractive sector and refusing to reveal White House meetings. In addition, the President has issued ethics waivers to staff, including many who are staffing or heading agencies that they once lobbied. These policies send a message about even handedness and good governance that can turn off investors.

With these policies and actions, President Trump has indicated that he (and hence the United States) is less committed to longstanding mores of good governance such as transparency, accountability and even-handedness.  Investors, especially Chinese investors, may send a signal in return by reducing their investments because they perceive the U.S. as an opaque, unpredictable, and increasingly risky place to do business.

China’s Investments in the AmericasDonald Trump
printTweet
You might also like
Back to Top
CHINA US Focus 2018 China-United States Exchange Foundation. All rights reserved. Disclaimer