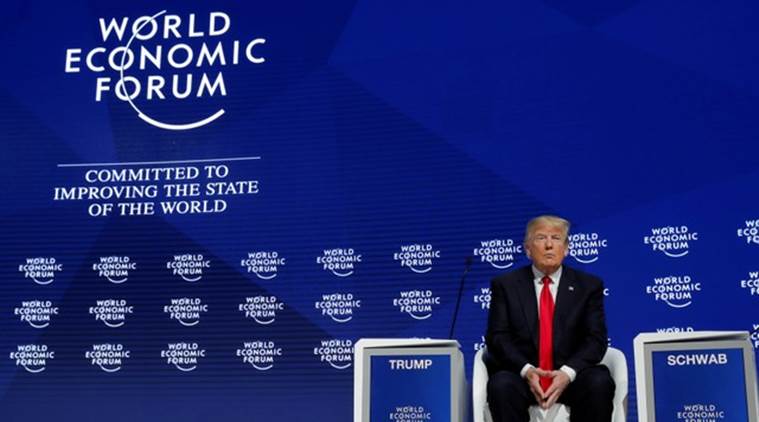 G.W.F. Hegel once said, when you see a knight ride about wildly, ask where he comes from and where he goes and do not worry about the flower meadows trampled to mud under the hoofs.

US President Donald Trump’s speech at the World Economic Forum was very rich in contents but there were only two main thrusts. The first was to highlight the achievements in the past year since Trump took office. Trump commended American economic performance, citing strong economic growth, record stock market highs, and high consumer and business confidence. ‘The world is witnessing the resurgence of a strong and prosperous America,’ he said. Trump also claimed that ‘there has never been a better time’ to invest in the US.

The speech was also an order to mobilize: America was to fight a trade war and allies must follow. Trump attacked ‘predatory’ trade practices and criticized some countries for exploiting the system at the expense of others and making ‘free and open trade’ impossible. He stressed the need for trade to be ‘fair’ and ‘reciprocal’ and vowed that the US would no longer turn a blind eye to unfair economic practices including massive intellectual property theft, industrial subsidies, and pervasive state-led economic planning.

Assessing economic performance with a series of indicators is a thing of the past. A striking feature of today’s economy is that various good economic indicators do not mean good economic performance. During the Bush and Obama administrations, various economic indicators looked good, but an increasing number of people experienced a worsening financial situation, more poverty and decreased actual family income. That has not changed much in the past year since Trump took office. On 15 December last year, the UN Special Rapporteur on extreme poverty and human rights criticized President Trump and the Republican-controlled Congress of distorting American society and attempting to make America ‘a champion of inequality’ and the ‘most unequal society in the world’. According to his report, 14% of the American population live below the poverty line and almost half of them are ‘extremely poor’. Children of poor families have almost no opportunity to escape poverty and the US has the lowest rate of social mobility among rich countries, which means that ‘the American dream is rapidly becoming the American illusion’. The Special Rapporteur pointed out that although poverty and the wealth gap in the US is the result of many years of policy， the situation would be even worse with Trump’s tax reform and welfare cuts.

The American economy’s problems are deep-seated. James K. Galbraith, son of John Kenneth Galbraith and economist at Texas University, published a book titled The Predator State ten years ago, with very sharp comments on the political situation in the US. According to Galbraith, America was no longer an all-inclusive Utopia for the middle class. The most fundamental feature of American capitalism was neither benign market competition nor struggle between capital and labor. It was ‘predation’. The US had fallen into the hands of a wealthy predator class that controlled the government. They robbed the fruits belonging to the labor class. Not all affluent people were predators and many members of the rich opposed the predator class. Within the predator class, the financial elites were the cruelest and most influential. Through various complex financial mechanisms and with credits, leverages, mergers, and acquisitions, they united the whole predator class and distributed fat profits. Value produced by workers, farmers, and wage earners became the basis of speculative financial tools. The finance capital became even stronger and gained control of more economic activities with each large financial transaction.

Today, the US is even more of a predator state is even more prominent, which is an important reason behind rising populist sentiments in the country. Trump’s ‘America First’ policy has further weakened public confidence. The latest Gallup poll published on 19 January revealed that only 30% of the respondents in 134 countries spoke positively of American leadership, nearly 20 percentage points lower than it was in the last year of President Barack Obama’s term in office, and the lowest in over a decade. In Canada, the US’ approval rating dropped from 60% a year ago to 20%. Most countries did not support American leadership and lost confidence in the US.

Diplomacy is an extension of domestic politics. It is usual American practice to attribute complicated domestic economic issues to ‘unfair competition’ by foreign countries. It is therefore necessary to take Trump’s mobilization seriously. Trump signed executive orders on 23 January to impose protective tariffs on washing machines and solar panels imported from China, firing the first shot of a trade war against Beijing. Besides high customs duties and trade quotas, the US has various other means of trade war. 2018 is already bound to be eventful, at least for China-US trade.