Is This the Beginning of a US-China Currency War? 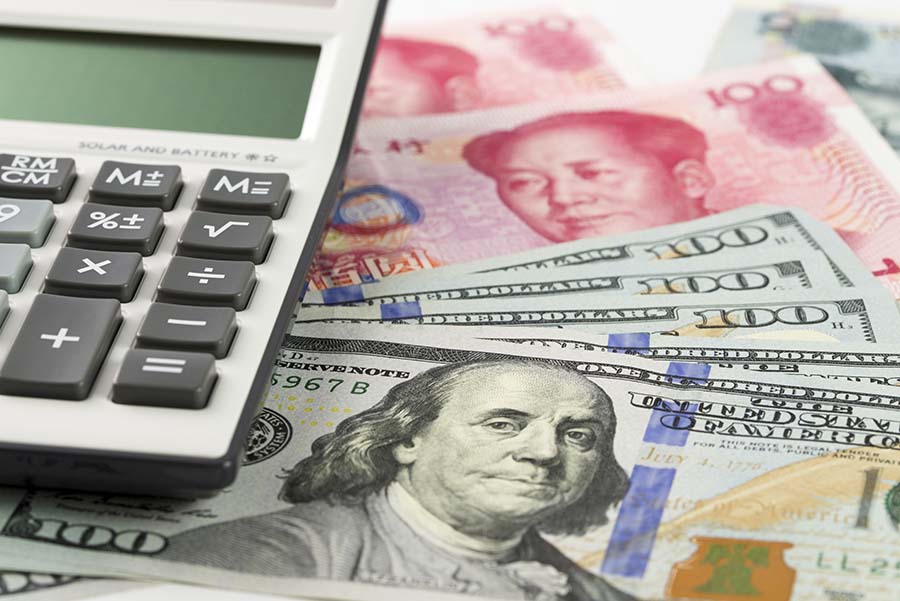 After China allowed the RMB to move past the psychologically important 7 RMB to 1 dollar ratio on Monday, the US responded by labeling China a “currency manipulator.” This led to mounting fears that this was the beginning of a US-China currency war, in which both sides attempt to reduce the relative value of their currencies.

To give credence to this idea, former Chinese central bankers warned of potential risks of a currency war between China and the US at a China Finance 40 meeting in Heilongjiang province last Saturday. Zhou Xiaochuan stated that trade conflict with the US could spill over into a number of other areas, such as technology and military.

China is unlikely to continue to allow currency to depreciate

In this environment of heightened mistrust between the two countries, China’s actions were easy to mistake for a targeted counterattack. Currency devaluation would allow China to export more cheaply and import more expensively. This would promote exports of Chinese goods to the US and counteract, to a small extent, the tariffs imposed by the US.

However, for observers who witnessed China’s heavy intervention to keep the RMB below the 7 mark in 2016, it seems unlikely that China would be willing to let the RMB go too far above 7. After all, the country had spent more than $107 billion in foreign reserves attempting to shore up the value of the RMB. This is because China’s leadership recognizes that the 7 RMB to 1 dollar exchange rate is a psychologically important level for market participants.

In addition, the rise in the exchange rate to 7.05 represented a 2.6% increase over the July average of 6.87, far less than the US tariffs of 10% that are to go into effect September 1. Tariffs of 10% would arguably have had a greater impact on the US, because most of the onshore RMB exchange occurs through trade. In other words, China could have struck back with symmetric tariffs, but the country chose not to. By allowing depreciation of the currency, it appears more likely that China was attempting to combat some of the negative pressures on the RMB by allowing it to rise in a measured way against the dollar. Ironically, headwinds against China’s currency gathered force due to President Trump’s announced tariffs against the Asian nation.

US response was overblown

President Trump, in response to China’s currency changes, labeled China a “currency manipulator” and called for the US to weaken the dollar. Technically, China does not fit the criteria needed to be categorized as a currency manipulator. According to the US 2015 Trade Enforcement Act, currency manipulation occurs when a country has a yearly $20 billion trade surplus with the US, a current account surplus of over 3% of the country’s GDP, and ongoing intervention in the foreign exchange market to reduce the value of its currency. China only meets the first criterion.

Instead of labeling China a “currency manipulator,” the Trump administration could have bided its time and watched China’s actions after the initial devaluation. President Trump might have issued a warning to China that the US is watching its activities in the exchange market, and/or consulted with IMF officials about China’s actions. Such moves would have been deemed far more diplomatic than striking back with an insidious label that has only served to ratchet up fear and tensions in the trade war. In effect, the impact of labeling China was just as hard on US markets as it was on Chinese markets.

Pan Gongsheng, head of China’s State Administration of Foreign Exchange, stated in an article on Monday that China “will not engage in a competitive devaluation and won’t use the exchange rate as a tool to handle international trade disputes. This is credible because it would harm Chinese consumers of imported goods from the US, Europe and Japan, including much needed food products. It also appears likely for the reason stated above, that China has taken pains to support the value of the currency.

So, what’s the next move going to be? At this point, it is a bit unpredictable. China is probably waiting for the US to make another move. The RMB-dollar exchange rate will probably hover around 7, as the US continues to impose economic pressure on China. While the US has stated it will delay tariffs on some products until December 15, trade talks have continued to bear no fruit. This may not be the beginning of a US-China currency war, but is definitely another low point in the US-China trade war.

Currency WarRMB DevaluationTrade War
printTweet
You might also like
Back to Top
CHINA US Focus 2023 China-United States Exchange Foundation. All rights reserved.