A central blueprint of the Ukrainian crisis comes from a 2019 report by RAND Corp., a U.S. defense contractors' think tank, which outlined the steps for maximum sanctions. As the crisis erupted, the Biden administration reversed its promise to fine-target Russian sanctions, in order not to harm Russian people and the world economy.

Ukraine is the means. The goal is to default the Russian economy. But the severe scarring of the world economy is seen as collateral damage.

Commodities reached a high of 4,160 in early March and have soared 33 percent since the beginning of the year. Food prices have climbed to an all-time high, nearly 21 percent above their level a year ago. The UN is warning of a meltdown of the world’s food system.

At the same time, energy prices have shot up in global markets. Crude oil climbed to a high of $125 in early March and has increased to $105 per barrel or almost 50 percent since the beginning of the year. In Europe, the most exposed region to Russian energy, natural gas quintupled to a high of over $250 and is hovering around $112 (€101.47). But these are just preludes to the tragedies to come (Figure 1).

Russia is the world's 11th largest economy, with a GDP of $1.8 trillion. Given its key role in global energy supply, Goldman Sachs (GS) has warned that the global economy "could soon be faced with one of the largest energy supply shocks ever."

Let’s set these figures in the context of the largest post-war energy disruptions. Amid the “still intensifying military conflict, escalating Western sanctions and growing isolation of Russia,” GS expects a base case of 1.6 million barrel/day disruption. Pessimists predict worse-case scenarios pushing crude prices up to $200; a third higher than in summer 2008 prior to the Great Recession.

In closer scrutiny, the most benign scenario (GS-1) is an underestimate. The medium scenario (GS-2) would have required proactive diplomacy and rapid crisis neutralization. In the absence of such initiatives soon, the world economy may inch toward the severe scenario (GS-3), reminiscent of the OPEC oil embargo (Figure 2). 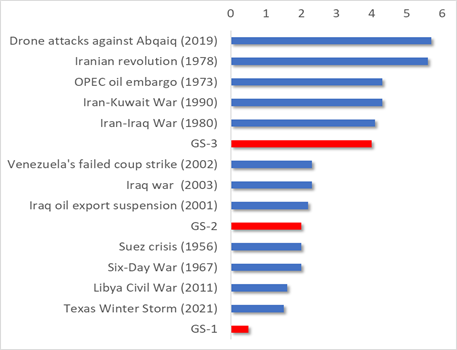 * Peak supply loss in millions of barrels per day. GS scenarios in red

In 2021, U.S. real GDP increased 5.5 percent, the fastest since 1984, as the economy continued to recover from the adverse pandemic effects. Wages grew at the fastest pace in decades, but prices increased even more, so the net effect was negative.

In 2021, most GDP expansion was accounted for by increased inventory investment and service spending. In the past two years the pandemic has lowered the economic output potential. During the ongoing year, GDP growth will slow because the level of fiscal support is smaller and the economy is closer to maximum employment.

Worse, inflation has proved stickier than anticipated because the Federal Reserve began to cut rates belatedly in March 2020, ignoring the WHO's early warnings. The second mistake ensued after mid-year 2021, when inflation began to climb rapidly.  As the Fed left the ultra-low rates intact, the galloping inflation soared to 7 percent in December, the fastest since 1982. America was coping with low interest rates and high inflation: stagflation (Figure 3).

In addition to rate hikes, the Fed will start reducing its balance sheet, perhaps in May, and those reductions could happen twice as fast as the last time. The double-whammy will have painful consequences, as Thomas Koenig, a former member of the Fed’s Committee (FOMC) has warned for years.

Early in the year, China’s economy, despite the overseas Omicron threat, was still fueled by strong data on trade and investment and further opening of capital markets. Foreign holdings of government bonds were at record levels fostering the yuan's appreciation. Export-led industrial expansion and retail sales rebounded.

On the supply side, the government’s fiscal spending and infrastructure investment contributed to improving fixed asset investment. As policies have been refined in the property markets, the goal has been to facilitate the completion of pre-sold homes and support new purchases.

However, major projects could raise the stimulus effect up to 7.7 percent of the GDP as headwinds have accelerated rapidly since late February. Despite strong vigilance, the COVID-19 infections, due to spillovers from Hong Kong, have led to the lockdown of major cities, including Shanghai and Shenzhen in the Guangdong province, where factories account for almost a fourth of exports.

The Government Work Report indicates solid support for the economy and fiscal spending. The central bank (PBOC) will further ease the monetary policy. Premier Li Keqiang announced the new GDP growth target for the year of “around 5.5 percent."

Amid unprecedented headwinds, the targets have been called ambitious but they may be viable, if the Ukraine crisis and pandemic outbreaks will not prove protracted.

Hedging against energy and food risks

China is promoting front-loaded policy support to strengthen the economy amid the global headwinds. Some of the key investment areas will concentrate on food and energy security. “It is important to fill the rice bowl of Chinese people, mainly with Chinese grain,” as President Xi Jinping recently said.

Last year, more than half of China's energy imports (almost $425 billion) comprised crude oil. But oil and natural gas imports are diversified, so losses could be offset in part by cheaper imports from Russia, China's second-largest oil supplier. Recently, Beijing and Moscow also signed a new 30-year $112 billion natural gas contract. It could go through the rapidly-expanding yuan-denominated trade system.

Meanwhile, Saudi Arabia, China's largest source of oil, is considering accepting payments in Chinese currency, instead of the U.S. dollar, for some oil purchases.

As the yuan has strengthened from about 7.18 in June 2020 to about 6.35 to the U.S. dollar, the appreciation will allow China to secure the imports of other commodities at lower costs.

After trade wars, the pandemic depression, aggressive sanctions and rate hikes, the Biden administration has accelerated debt-taking to pay for its infrastructure initiative, while spending ever more in the “forever wars.” Unsurprisingly, concern in the markets about a U.S. recession is growing as soaring commodity prices, reduced fiscal spending and rising interest rates threaten economic expansion.

Not so long ago, the White House argued that aggressive debt-taking was tolerable because the burden of servicing it has fallen. That was the advice of Democratic heavy-weight economists to Biden in December 2020. But the guidance was short-sighted and naïve. Net interest payments are becoming the fastest growing element of the federal budget.

In a decade, interest costs are set to exceed 12 percent of the entire federal budget, while almost tripling to $910 billion (Figure 4a). By 2050, the sum total of net interest costs is likely to exceed $60 trillion as interest payments will take up almost half of all federal revenues. That's an economic time bomb (Figure 4b).

In the West, economic sanctions are portrayed as a solution to the Ukraine crisis with minimal harm to the world economy. In reality, they will make a regional war, which was unwarranted and avoidable, far worse, while undermining global prospects in the short-term and contributing to untenable risks over time.

Ukraine CrisisChina-U.S.-Russia RelationsRussia Sanctions
printTweet
You might also like
Back to Top
CHINA US Focus 2023 China-United States Exchange Foundation. All rights reserved.