On May 5, Professor Laurence J. Lau, Ralph and Claire Landau Professor of Economics of the Chinese University of Hong Kong delivered a lecture with the same title during an online session hosted by the China Center of the Jesus College of Cambridge University. Professor Lau has kindly provided China-US Focus with an edited text of the lecture in which he addresses the role of public goods - education, public health, elderly care, basic research, infrastructure, social safety net, and alleviation of poverty -  in China’s social and economic development over the past seven decades. Professor Lau argues that increasing provision of public goods is consistent with China’s strategy of “dual circulation development" as well as its “common prosperity” policy, and could be a significant source of growth in demand in both consumption and investment that is essential to China’s continued prosperity. The following is part one of the lecture. 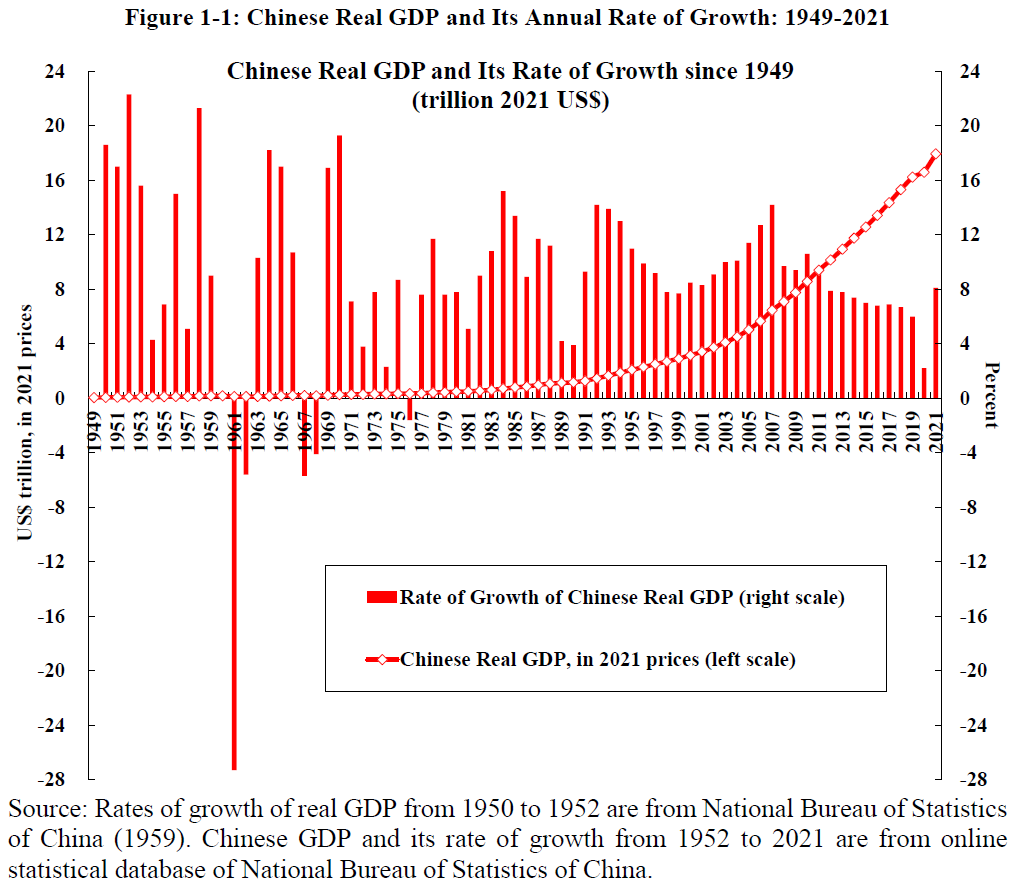 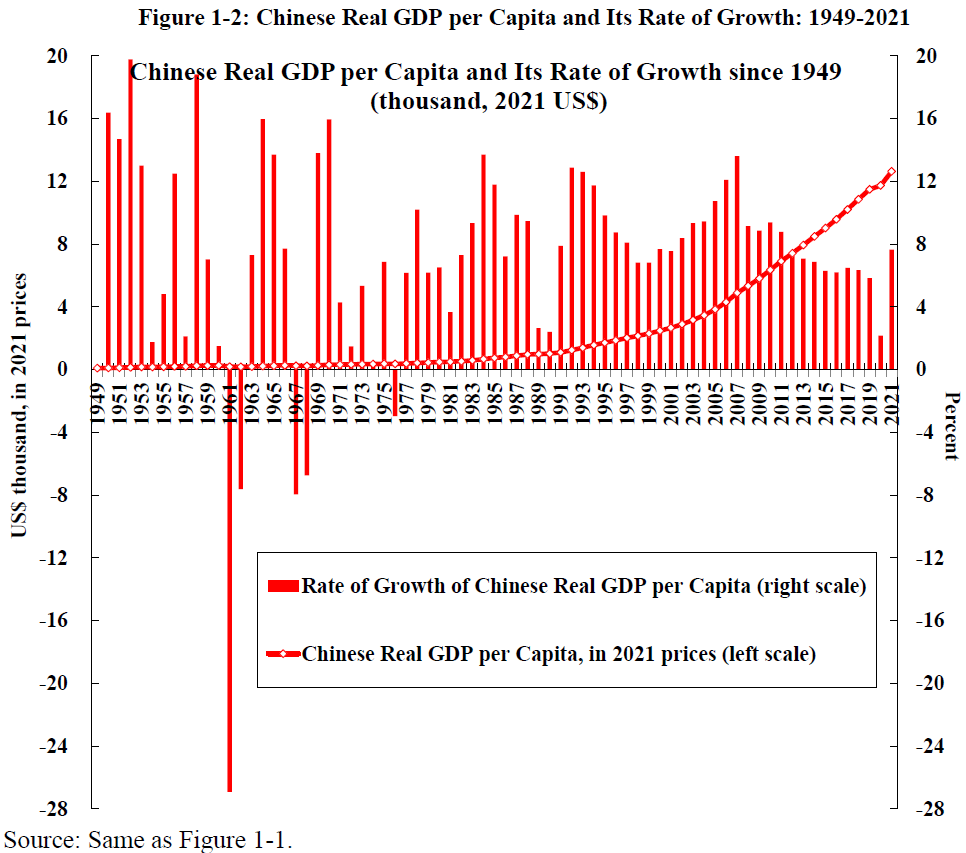 Despite the significant fluctuations and volatility of the rates of growth during the two decades from the late 1950s to the late 1970s, the average annual rates of growth of real GDP and real GDP per capita for the entire period from 1949 to 2021 are respectively 8.47% and 7.03%, a truly remarkable and historically unprecedented achievement over a period of more than seven decades.  We can attribute this success largely to the economic reform and opening to the world undertaken in 1978, as well as to the long time horizon of the Chinese economic policy makers and their single-minded focus on economic growth from 1978 onwards.  With a long enough planning horizon, one can afford to undertake investment in development-leading infrastructure, that is, infrastructure the demand for which has not yet materialised but can be created by the supply itself.

Between 1978, the beginning of the Chinese economic reform and opening, and 2021, Chinese real GDP has grown more than 40-fold, from US$415 billion to US$17.94 trillion, in 2021 prices, and real GDP per capita has grown almost 30-fold, from US$431.2 to US$12,699.  During this period of more than four decades, there was not one single year in which the rate of growth of real GDP or real GDP per capita turned negative.  The average annual rates of growth of real GDP and real GDP per capita for the post-reform period from 1978 to 2021 were respectively 9.15% and 8.18%, even higher than the average annual rates of growth achieved since 1949.  However, the income distribution did become much more unequal during the post-reform period.  But despite the significant rise in the value of the Gini coefficient in China since the mid-1980s, the welfare of all Chinese people has also improved significantly.

We now turn to consider the Chinese economic fundamentals.  Are there sufficient primary inputs of production—capital and labor—to continue to support Chinese economic growth?  The Chinese national savings rate has remained high, currently at approximately 45 percent, certainly the highest in the world amongst major economies.  This means that the investment rate can also remain high, even in the absence of inflows of foreign direct investment or foreign loans.  However, recent Chinese demographic developments appear unfavourable—its population is ageing rapidly, with almost zero growth.  But, as will be explained below, the labor supply problems are basically manageable.

Indigenous innovation has also been occurring in many areas, for example: 5G communication, the BeiDou Navigation Satellite System, high-speed trains, quantum communication, super-computers, and ultra-high-voltage transmission of electricity.  In time, innovation or technical progress should also become an important source of economic growth.

The Chinese national savings rate rose from 21.1% in 1952 to 36.8% in 1979 and 45.7% in 2020 (see Figure 1-3).  It will remain high and provide the necessary resources for additional investment in fixed-assets, including infrastructure, human capital, research and development (R&D), and the provision of public goods such as education, healthcare, environmental preservation, protection and restoration, elderly care and poverty alleviation.  Household consumption will rise as household income continues to rise and more and more households join the ranks of the middle class.  However, as shares of GDP, household consumption as well as total consumption (including government consumption) have been on a downward trend for the past sixty years.  As of 2020, they were respectively less than 40% and 60% of GDP (see Figure 1-4).  Left on their own, they are probably not sufficient to shore up the aggregate demand needed for the economy to continue its growth. 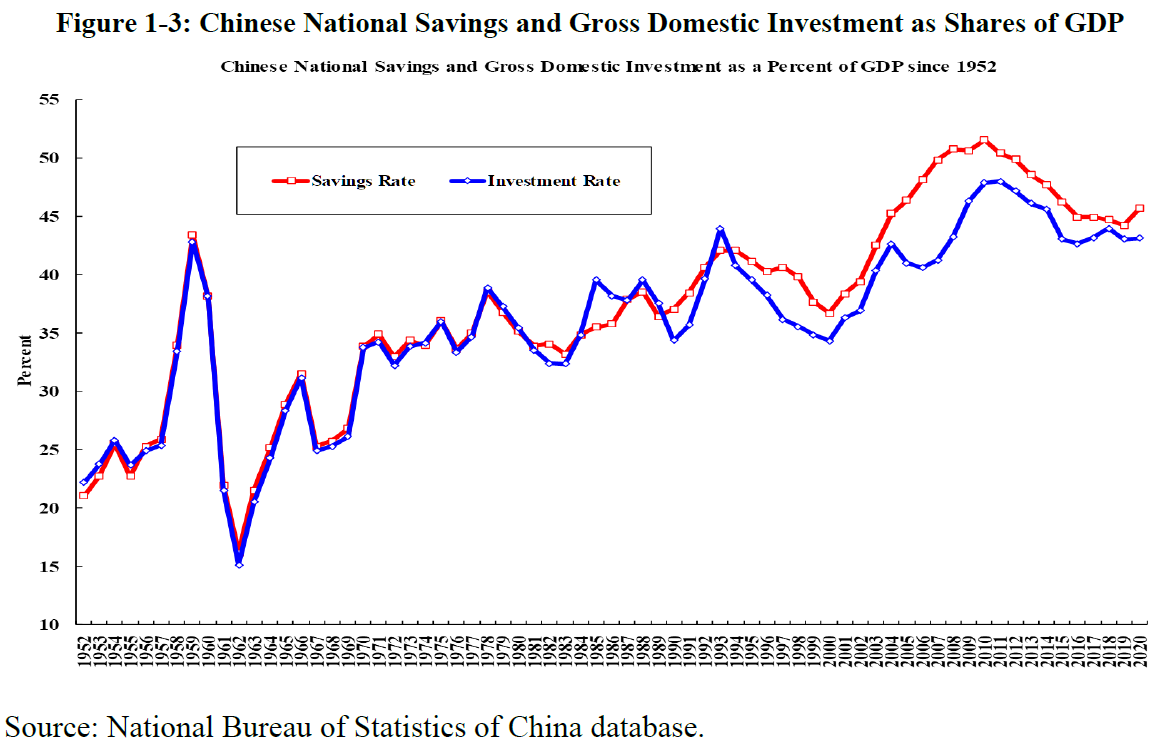 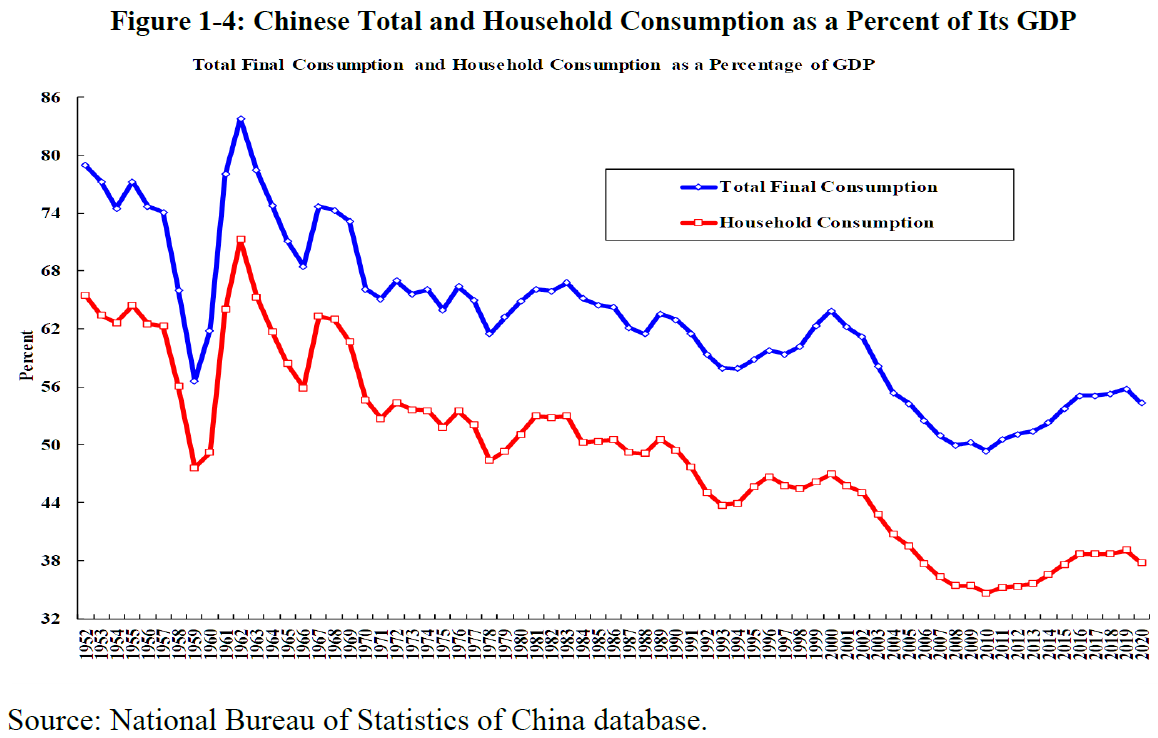 The Chinese crude death rate declined continuously from 2.0% in 1949 to 0.72% in 2021, with the exception of the period of the Great Famine (1959-1961), reflecting the improvements of the economic and public health conditions in China.  The Chinese crude birth rate also declined from 3.60% in 1949 to 0.75% in 2021, barely above the crude death rate (see Figure 1-5).  This was due, in part, to the legacy of the one-child policy, which was implemented in 1980 and discontinued in 2016, as well as to the rising educational level of women and urbanisation. 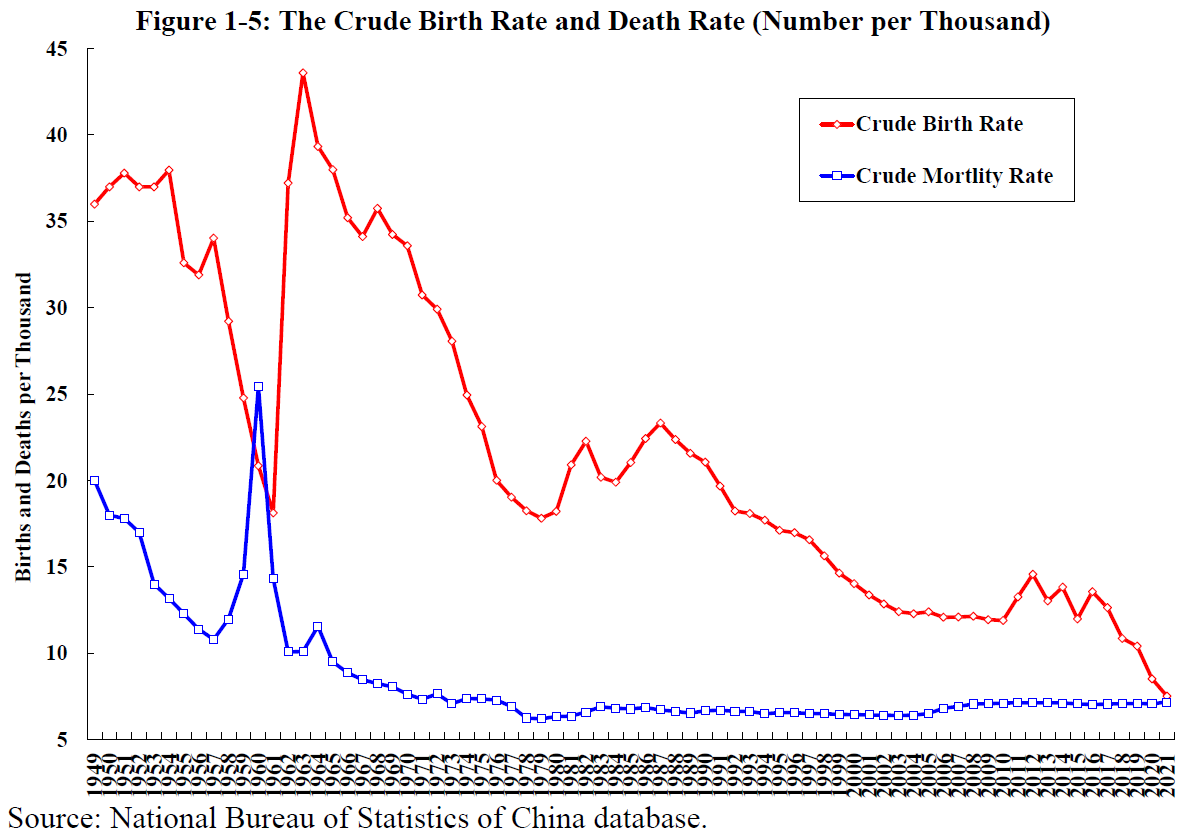 While the net rate of growth of the total population, the difference between the crude birth and death rates, has been approaching zero (see Figure 1-5), and may even turn negative soon, it is unlikely to result in a serious shortage of labor as yet.  The demand for labor can be satisfied through continued urbanisation, that is, by the movement of surplus labor from the rural to the urban areas.  Despite the claim that the “Lewis Turning Point” has arrived in China, there still exists substantial surplus labor.  The primary (agriculture) sector, which generated only 7.3% of GDP in 2020, but accounted for 23.6% of total employment in 2020, is still in a position to supply labor to the secondary (manufacturing, mining and construction) and tertiary (service) sectors without affecting its output.

In addition, the mandatory retirement ages, which have officially remained at 55 for women and 60 for men, an anachronism inherited from the early 1950s, when life expectancy was in the low sixties, are ready for a change.  The gradual raising of the mandatory retirement ages, given the current life expectancy at birth of more than 77 years, should help to augment the labor force.  In the transition to a new mandatory retirement age of say 65 for all, one can make retirement at 55 for women and 60 for men optional, so that no one’s rights will be abridged.  Moreover, the quality of the Chinese labor force has also improved significantly through various investments in education and public health over the past decades.  The “efficiency-equivalent” quantity of the labor force continues to grow even though numerically the labor force may no longer be growing.  Finally, the adoption of automation and robotics through the application of artificial intelligence can also enhance the effective labor force.  The elimination of restrictions on the number of children and the possible lowering of the marriage-eligible ages should also help to increase the Chinese birth rate gradually, but it will take a couple of decades before there will be a noticeable impact on the labor force.

With a large population and hence a large domestic market, China also enjoys economies of scale from both production and marketing, learning-by-doing (that is, efficiency improvement resulting from repetitive production of the same good, such as high-speed trains), and the advantage of longer upper tails in the ability distribution because of the size of its population.  Moreover, as a large continental economy, the domestic Chinese economy is largely unaffected by external disturbances, similar to the U.S.  Thus, while the Chinese rates of growth of exports and imports fluctuate like other East Asian economies, the rate of growth of its real GDP has remained relatively stable.

China’s EconomyPublic Goods Provision
printTweet
You might also like
Back to Top
CHINA US Focus 2022 China-United States Exchange Foundation. All rights reserved.