In the short run, all increases in government expenditures have the same macroeconomic effects on both GDP and employment.  However, in the long run, increases in real fixed-assets investments augment the real capital stock and increase the real GDP, whereas increases in consumption due to increases in disposable income through, for example, tax cuts and transfer payments, generate no direct lasting benefits.  Infrastructural investment, which is often needed for the provision of public goods, can generate benefits that can be widely shared in the economy even though they cannot be fully captured or internalised by the projects themselves. 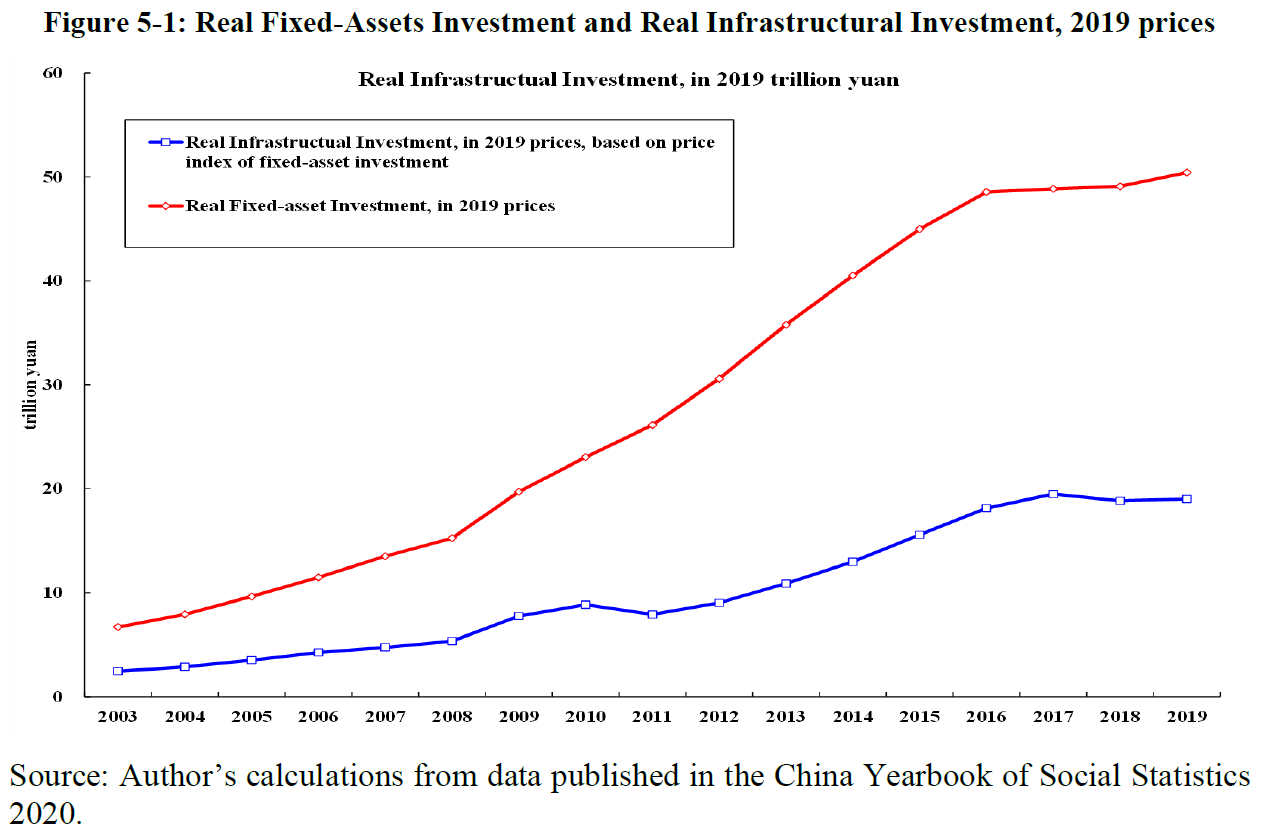 The Components of Chinese Aggregate Demand

The share of household consumption in aggregate demand (GDP) has been declining over time, from a peak of almost 71 percent in 1962 to less than 38 percent in 2020 (see Figure 1-4 above).  Gross domestic investment, which includes real fixed-assets investment, has become the most important source of aggregate demand since 2004 (see Figure 6-1).  It was just below 43 percent in 2020.  The share of government consumption, which includes most public goods consumption, has been increasing slowly and gradually from 13.5 percent in 1952 to just below 17 percent in 2020.  There is a great deal of room for both government investment and government consumption to grow through increased public goods provision.  Net exports will continue to decline in relative importance as a component of Chinese aggregate demand, given the Chinese objective of balanced international trade. 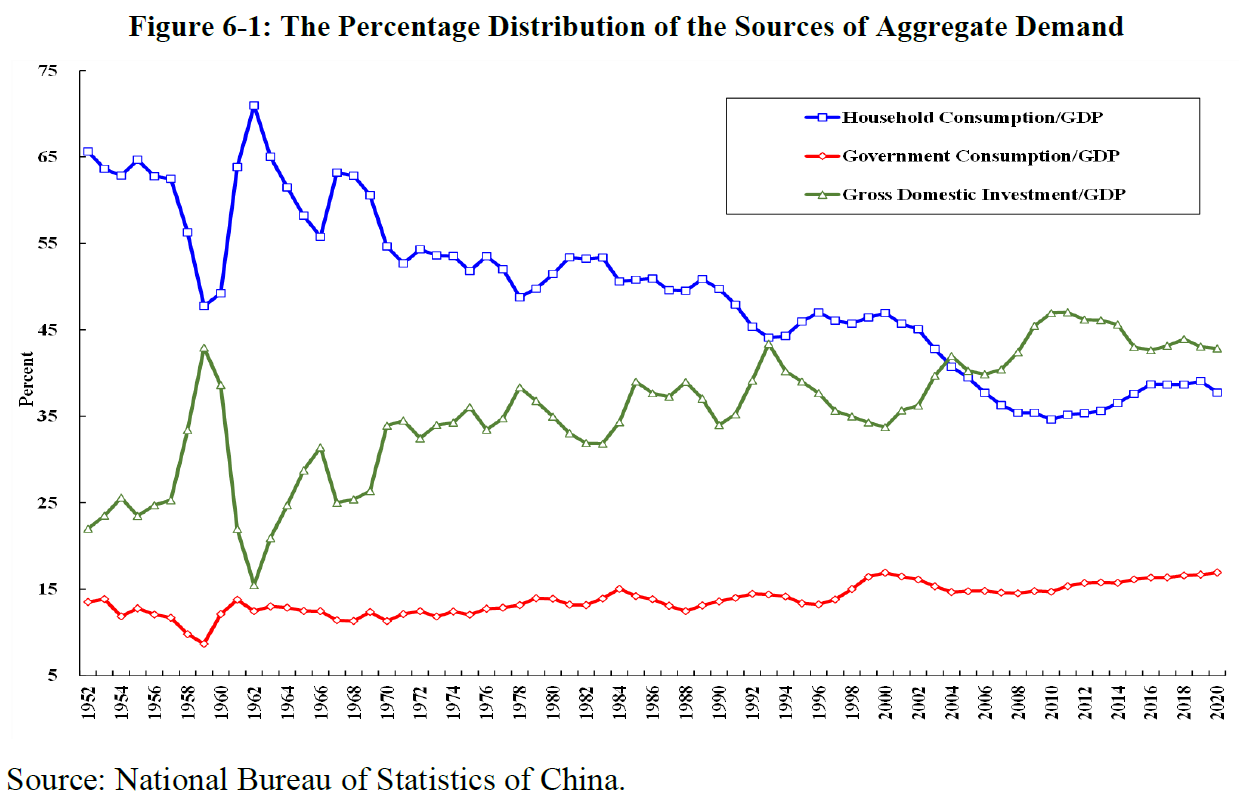 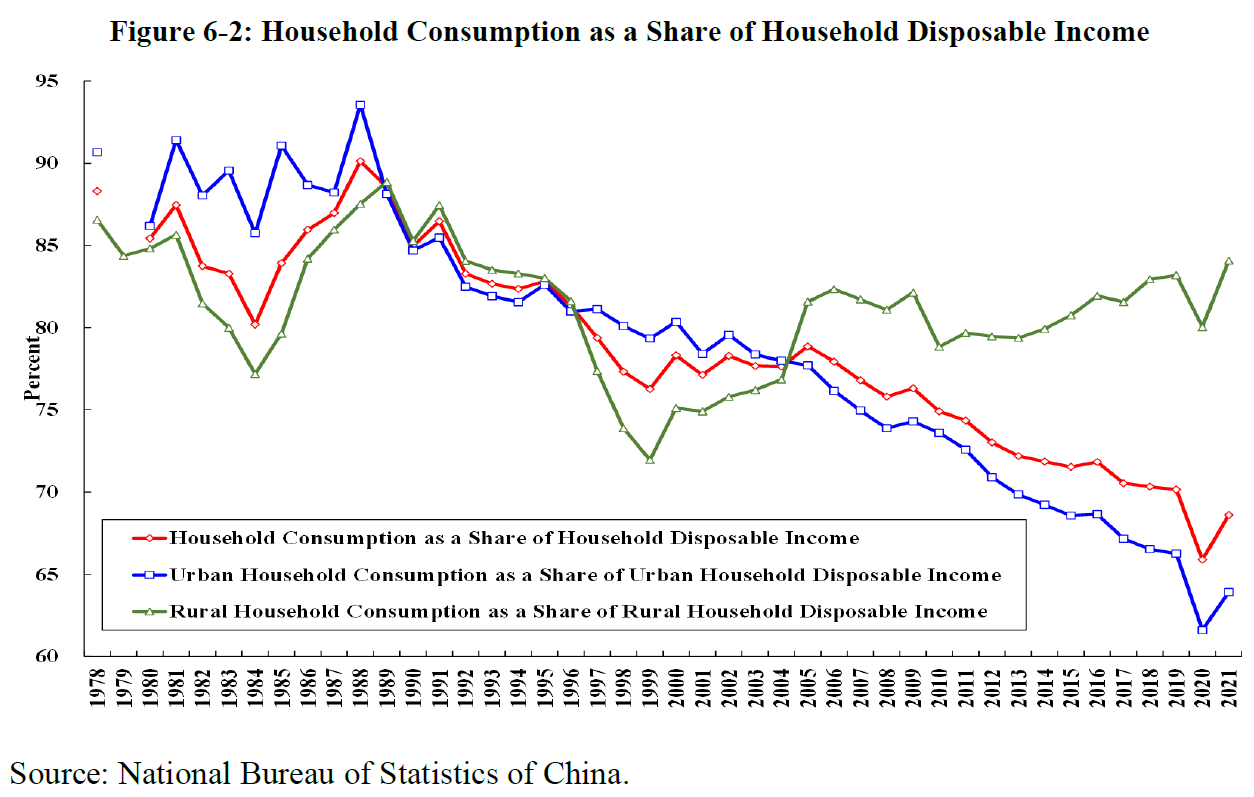 The Chinese economy will pursue a dual-circulation development strategy with a domestic circulation and an international circulation complementing each other, but with the domestic circulation playing the primary role, which is to be expected for large continental economies like China (and also the U.S.).  The Chinese economy is no longer export-driven.  It aims to have balanced international trade.  It will be domestic demand-driven—by household consumption, gross domestic investment, and public goods consumption.  The adoption of a dual circulation strategy by China is evidence of its recognition that total self-sufficiency is not a viable alternative and of its continuing commitment to an open economy and to economic globalisation.

The Chinese ratio of international circulation to domestic circulation was below 10 percent before 1981, when it began to rise. It reached a peak of almost 70 percent in 2006, but then declined to 35 percent by 2020 (see Figure 6-3).  The U.S. ratio was around 20 percent between 1980 and 2000 and rose to a peak of 30 percent in 2011, but then declined to 23 percent by 2020.  It is expected that the ratios for both countries will be declining some more over time and eventually reach similar levels.  A possible de-coupling of the Chinese and U.S. economies will increase the importance of domestic circulation for China.  Public goods provision can become a major source of increase in domestic aggregate demand for both consumption and investment going forward. 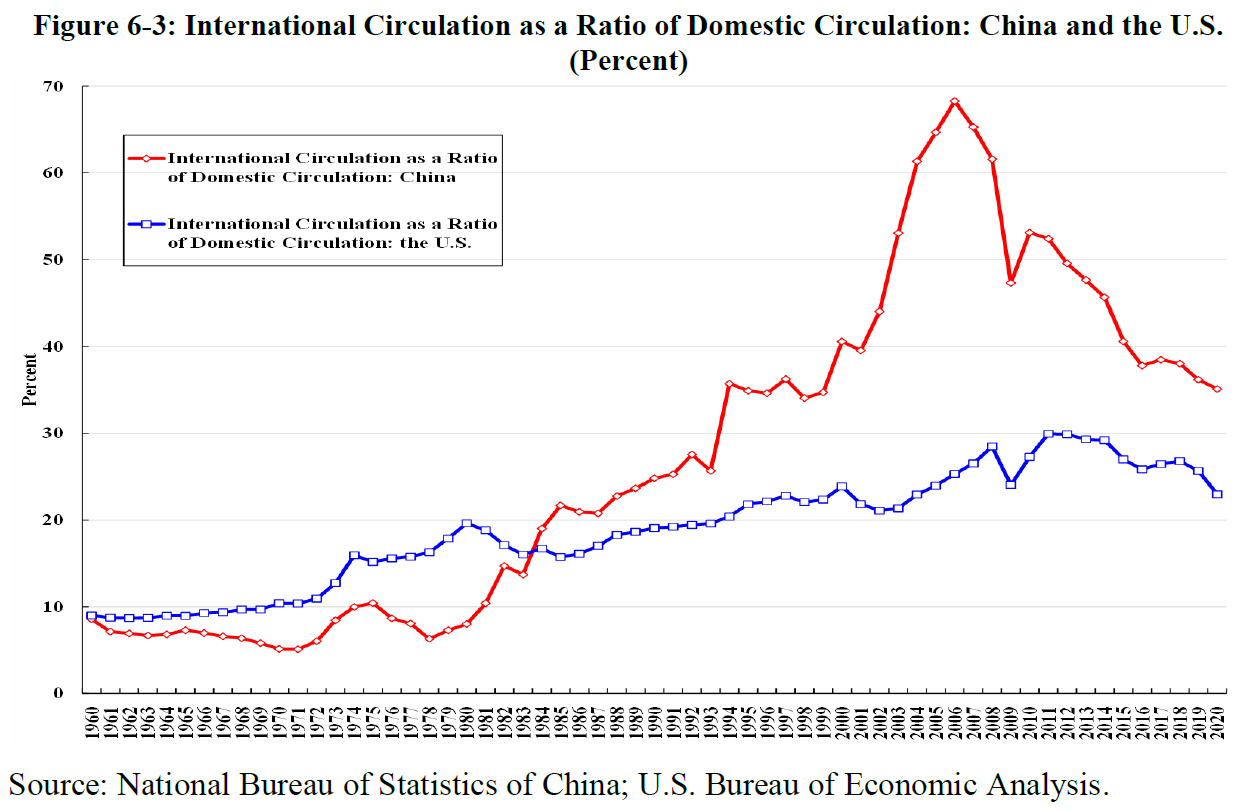 The Financing of Public Goods Provision

One problem of public goods provision is that most of the activities do not generate positive value-added at market prices.  For example: cleaning up air pollution is costly but does not generate any net revenue and hence does not create any net positive GDP; providing mass transit improves the environment, reduces traffic congestion, and enhances welfare, but often cannot break even on its own.  Thus, increasing public goods provision is likely to result in a reduction of the rate of growth of conventionally measured real GDP even as it enhances social welfare (unless and until China adopts a “green GDP” as a metric).

How can public goods provision be financed?  In general, it has to be subsidised by the government.  Public goods can be financed through general revenue, project bonds, user fees, or specific taxes such as a carbon tax.  One potential source of government revenue that can be tapped by China is the accumulated undistributed earnings of state-owned enterprises (SOEs) and their parents.  Publicly listed SOEs should be required to pay annual cash dividends to their shareholders, including their state-owned parent companies.  These funds will eventually end up in the State Treasury to help finance the budget deficit, if any.  General revenue can also be increased through a reform of both individual and enterprise taxation and through enhanced tax compliance and enforcement.  For example, Chinese income taxation is supposed to be “worldwide”, just like that of the U.S., but the income of Chinese individuals from foreign sources is currently effectively not taxed.

The economic development of China since the establishment of the People’s Republic is characterised by not only quantitative growth, but also significant improvements in the “quality” of growth.  Most of the improvements in quality have been brought about through the provision of more and better public goods.  Provision of public goods such as education, public health, elderly care, environmental preservation, protection and restoration, basic research, infrastructure, social safety net, and alleviation of poverty has been vastly expanded over the past seven decades, with significant positive results.  The provision of public goods has also raised the potential GDP of the Chinese economy through its effects on increasing the aggregate demand, the real capital stock, the productivity of the labor force, and the rate of return on other fixed-assets investment.  For example, the improvements in the quality of the Chinese labor force have greatly enhanced its productivity.

Public goods are by their very nature mostly “local”, and their provision is consistent with the Chinese “dual circulation development strategy”, which has its primary focus on domestic circulation.  The provision of public goods also constitutes a form of re-distribution in kind, for example, clean air and water, which can be enjoyed by everyone, and hence also directly advances the goal of “common prosperity”.  Finally, increasing the provision of public goods can be a significant source of growth of the domestic aggregate demand for both consumption and investment, over and above what increases in household consumption alone is able to provide.  Maintaining an adequate growth of domestic aggregate demand is essential for continued Chinese economic prosperity.

However, the provision of public goods frequently results in negative value-added at market prices, and will therefore reduce rather than enhance the rate of growth of measured GDP.  This is one reason the targeted rate of growth of the Chinese economy in 2022 has been set at a relatively low level of 5.5 percent, the lowest in more than four decades.  Despite the significant increase in the degree of income inequality in China, as measured by the Gini coefficient, the welfare of all Chinese people has improved significantly since 1978 as a result of its economic reform and opening to the world.

China’s EconomyPublic Goods Provision
printTweet
You might also like
Back to Top
CHINA US Focus 2023 China-United States Exchange Foundation. All rights reserved.