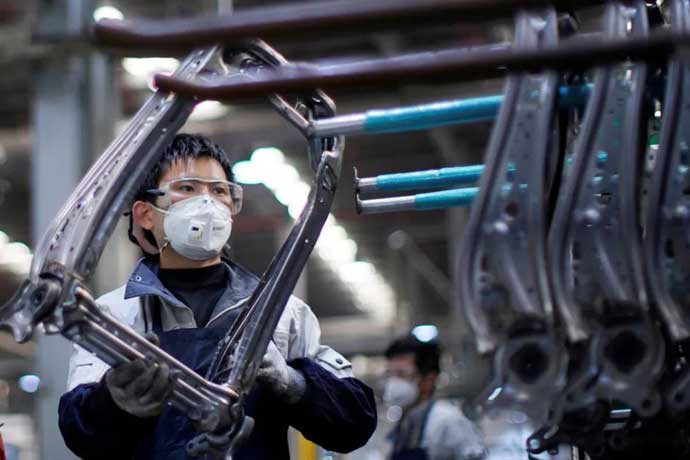 The coronavirus outbreak is a major external factor affecting the world economy following economic globalization. The pandemic has dragged the world into the worst economic recession since the Great Depression. In addition, it is intensifying a structural reshuffling between countries and accelerating the trend toward localization, regionalization and decentralization of global supply and industrial chains. This makes a restructuring of global industrial chains, including those of China and the United States, all but inevitable in the post-epidemic era.

With the pandemic out of control, U.S. states are facing a serious shortage of medical supplies. Their worries about the supply of masks, ventilators and drugs further highlight their dependency on items made in China. Therefore, bringing supply chains back to the U.S. from abroad and achieving all-around independence for the United States, both in supply chains and manufacturing, is also becoming a strategic option for the United States.

On March 27, the U.S. government urgently activated the Defense Production Act to ensure the domestic production of strategic goods. White House trade adviser Peter Navarro, Republican Senator Marco Rubio and others have aggressively pushed for the Buy American Act, demanding that federal agencies buy U.S.-made drugs and medical devices to reduce their reliance on China’s supply chain. Big companies like Tesla and Ford have announced that they are freeing up production lines to produce much-needed ventilators and other products in the United States.

White House economic adviser Larry Kudlow also said that the administration is planning to promote the policy of attracting U.S. companies back from China and give them the ability to write off 100 percent of the expense immediately so that they can pay their moving costs.

In recent years, the world’s dependence on China has increased year by year, with the proportion of China’s exports globally increasing from 3.9 percent in 2000 to 12.8 percent in 2018. China’s exports of machinery and transportation equipment and miscellaneous products account for 19.2 percent of the global total. Thus, dependence on China is also seen as a threat to the national security of the United States.

Over the past two years, amid the trade war, signs of China-U.S. decoupling have been frequent, and the coronavirus epidemic is bound to accelerate the process, leading to a decline in bilateral trade flows in intermediate or capital goods. Trade volume between China and the United States in the first quarter was less than $100 billion, down nearly 20 percent year-on-year. It accounts for only about 10 percent of China’s total trade.

The deteriorating China-U.S. relationship in terms of industrial and supply chains reflects changes in globalization. Apart from the interference of the U.S. government, the weakening of strategic mutual trust between countries and the inherent laws of globalization at different stages of development are all important factors contributing to the localization of global industrial and supply chains. The contraction of these chains has become a measurable fact.

Both emerging and developed economies have over the years been progressively refining their domestic industrial chains to reduce their reliance on imported intermediate inputs. The decline in global trade intensity is a very clear signal. Measured as a proportion of global output, global trade in intermediate goods declined by 5.1 percentage points between 2007 and 2017. After the 2008 financial crisis, developed countries launched reindustrialization strategies, such as the U.S. Advanced Manufacturing Initiative, the Japanese White Paper on Manufacturing Industries, the Future of Manufacturing for the UK 2050 and Industry 4.0 in Germany. In recent years, with the introduction of the “America first” policy in the U.S. and Germany’s National Industry Strategy 2030, the process of reindustrialization in developed economies has accelerated.

The same is true for emerging economies. For example, in recent years, as China’s industrial structure has continued to mature, the country has rapidly moved up the industrial chain, and its dependence on global industrial and supply chains has decreased. The weakening of trade intensity reflects the increasing industrial maturity of emerging economies, a trend that cannot be reversed.

At present, there are three major global production centers deeply involved in global industrial and supply chains — the North American center with the United States, Canada and Mexico at the core; the EU center, with Germany, France, the Netherlands and Italy at the core; and the East Asian center with China, Japan and South Korea at the core.

China’s industrial and supply chains have long been deeply integrated with the world, but in terms of the degree of connection, China’s production is more closely linked with that in Japan, South Korea and other Asian countries, especially in the computer, electronics and optics sectors.

It is certain that the coronavirus epidemic is a structural shock and will accelerate the trend toward world multipolarity. The regional division of labor will replace the global division of labor more quickly. The signing of some mega regional trade agreements, such as the CPTPP (at 13.1 percent of the global economy), the EPA between Europe and Japan (at 28.1 percent) and the USCMA agreement (at 27.6 percent), will further strengthen the regionalization of production in North America, Europe and Asia.

The post-epidemic era will inevitably usher in a polycentric global division of labor and a transition in economic globalization.

COVID-19Global EconomyGlobalization
printTweet
You might also like
Back to Top
CHINA US Focus 2022 China-United States Exchange Foundation. All rights reserved.