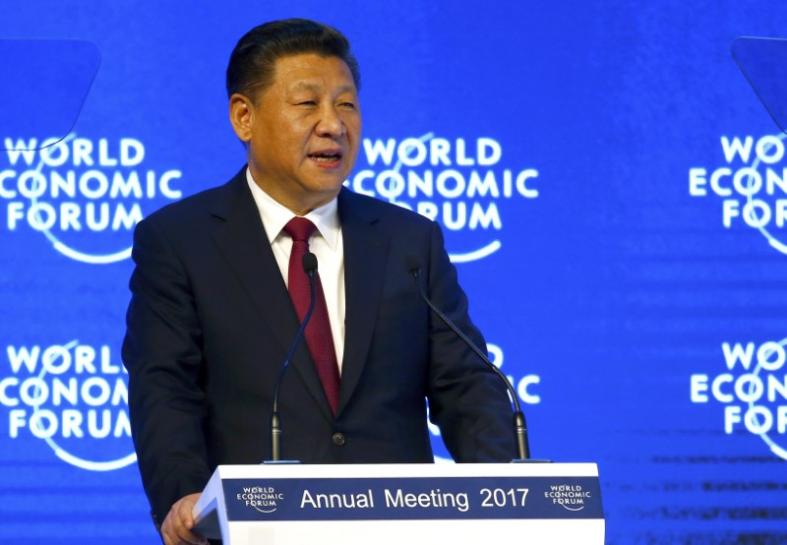 In 2017, China’s President Xi Jinping, the first Chinese leader to attend the Davos World Economic Forum, vigorously defended free trade and economic globalization during his speech. This year, Liu He, current member of the Politburo of the Communist Party of China and the chief economic advisor, reiterated Xi’s talking points from the previous year and also addressed the “three critical battles China is preparing to fight” on the road to becoming a “moderately prosperous society in all respects by 2020” and “a great modern socialist country in two steps by 2050.”

China’s robust defense of economic globalization, though distinctly opposite from what the newly elected American President Donald Trump stands for, still resonated deeply with the global elite. America has always been afraid that China will exceed America and become the world’s most likeable superpower, but today, with the “America First” rhetoric from Trump’s administration leaving America more isolated than ever, China is getting a “green pass” to become a world leader. As Lawrence Freedman, Emeritus Professor of War Studies at King’s College, London said: “We have the global elite embracing Xi as the anti-Trump.”

China issued several policies after Xi’s speech in Davos 2017 in order to prove itself a reliable and trustworthy business partner for international investors. One of the latest and most significant policies was announced by China’s Vice Minister for Finance, Zhu Guangyao, in November 2017. The policy lifted the ban for foreign investment in the Chinese financial industry. Foreign investors will be allowed to own 51 percent in securities firms, investment managers and life insurance providers. The policy is in accordance with Liu He’s words in Davos 2018: “We have worked to strengthen the protection of property rights and promote fair competition.”

The Chinese media has argued that Xi’s speech and visions shaped Davos 2018, despite his absence from the conference. If Xi’s 2017 speech is regarded as a powerful statement, Liu’s speech is a more detailed agenda for China to promote globalization responsibly. Aside from showing China’s achievements, Liu listed three critical battles China has to fight, including: preventing and resolving major financial risks, conducting targeted poverty reduction and controlling pollution. Apparently, China is off on a journey to prove to the world its capacity to be a leader, instead of a hegemony. The world is expecting and witnessing the making of a new global leader. As Klaus Schwab, Executive Chairman of the World Economic Forum said: “In a world marked by great uncertainty and volatility, the international community is looking to China to continue its responsive and responsible leadership in providing all of us with confidence and stability.”

The time when America was able to stand at the pinnacle of the world and run a world order built around its own interests is long gone, thanks to the rise of multi-polar powers. America managed to become the world’s majority shareholder by developing a web of global institutions to follow an ideological goal: “reduce the risk of another murderous global conflagration.” According to the reporter Thanassis Cambanis of Politico Magazine, “these institutions have worked imperfectly, but they build goodwill and reduce risk. That’s good for the world in general, but it’s great for America.”

To maintain an enormous global web of institutions has cost America a tremendous amount of money and effort. Today, the accession of Trump’s administration— an administration emphasizing counterterrorism and reinvigorating America’s domestic economics— reflects the public’s dissatisfaction with the price America has paid to become the world’s policeman. In Davos 2018, American President Donald Trump reaffirmed his “America First” statement and declared that “America first is not America alone.” Trump believes that under his administration, America is experiencing an unprecedented resurgence. As he put it, “America is open for business and we are competitive once again.”

Trump’s speech has proved that America is going through a transition from being the “world’s policeman” to an inward-looking country lacking a sense of security. After years of being “a guardian of the new world order,” America, the world’s first economy, is facing the challenges that a highly international country has to face. Due to its highly interconnected nature to the rest of the global economy, America’s domestic turbulence has turned into an international concern and this will have a tremendous impact on the American domestic situation. In other words, today’s multi-polar political situation has had more impact on America than ever and to some extent, has led to the internal crisis America is facing today. The price of being the world’s policeman and keeping other states in order is higher than ever.

China, on the other hand, is taking a different route. As a country that has significantly benefitted from economic globalization and has successfully leaped from extreme poverty to economic growth, China knows how to engage in multilateral diplomacy today. Unlike the UK and America, countries that gained hegemony in part by waging brutal imperialist wars, China is a country that shared the history of being a victim of exploitative subjugation, and therefore is looking to become a leader instead of a hegemony. As Liu mentioned in his speech: “The Belt and Road Initiative originated from China, but it is an idea that will deliver opportunities and benefits to the whole world. Better physical and people-to-people connectivity will generate effective demand worldwide and sustain the momentum of global economic recovery.” China is trying to fulfil the role of a responsible stakeholder. Although China is facing criticism for undermining the world trading system and Xi’s increasing authoritarianism, as the South China Morning Post said, “Xi Jinping isn’t just reforming China, he is creating an alternative to the West.” Xi’s speech at Davos in 2017 was a rebuke to Trump’s administration and this year, as the Belt and Road Initiative is expanding its impact, China is off on a journey to realize its promise to the world, as Liu guaranteed in his speech: “Some measures will exceed the expectations of the international community.”

America used to rule, but China is going to lead. While America has shifted its attention from maintaining the world order to strengthening its domestic economics, China is making use of the “leadership vacuum” and trying to convince the world that it is qualified. China is well-aware that the world will be more integrated and the future will be shared by different parts of the world. Just as an old Chinese saying goes: “He who strives first gains the advantage.” If China wants to be a leader in a shared-future, as Liu mentioned: “We need to have an open mind and take a strategic perspective. We need to enhance mutual understanding, tolerance and trust. And we must seek cooperation in a sensible and practical manner.” The world can always accommodate more than one leader, especially in a multi-polar time. The question that remains is how other countries are going to negotiate and maintain their relationship with each other, and whether the world is willing to give China, a country nurtured by globalization, a platform to demonstrate its strength and also, to maintain or even to engage in the creation of a new world order.

DavosWorld EconomyGlobal Governance
printTweet
You might also like
Back to Top
CHINA US Focus 2018 China-United States Exchange Foundation. All rights reserved. Disclaimer