Trade War Truce, But for How Long? 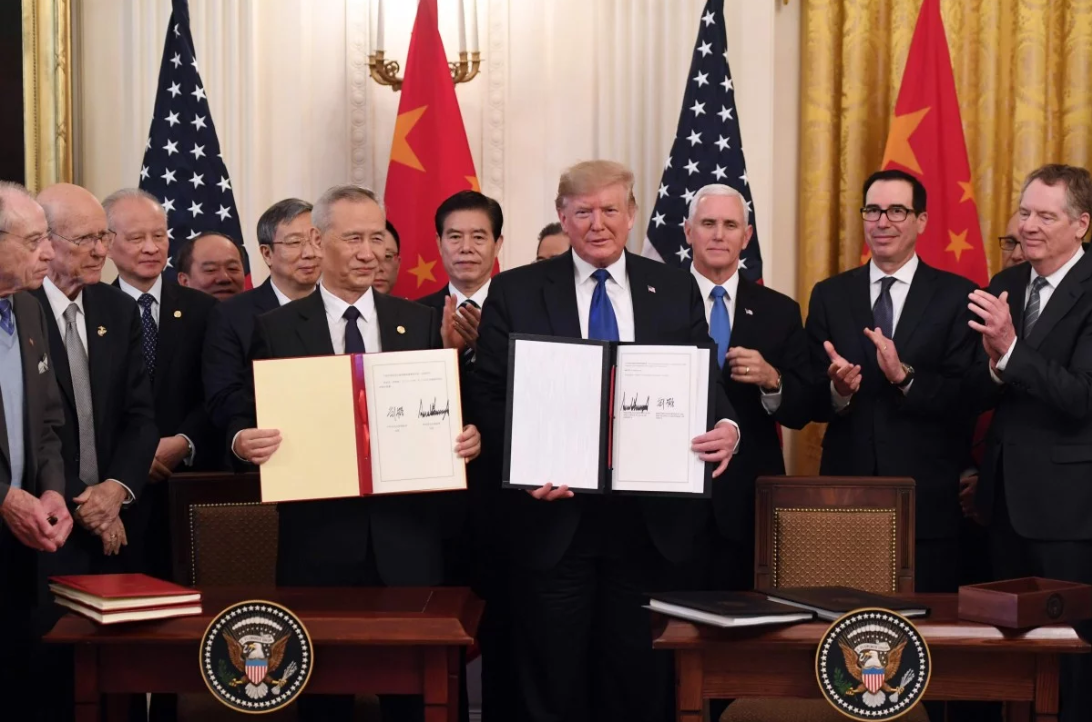 Chinese Vice-Premier Liu He and US President Donald Trump display the signed phase one US-China trade agreement at the White House in Washington on Wednesday. (Photo: AFP)

January 15, 2020 will be recorded in history as marking a hard-won truce in the 22-month trade war between the world’s two largest economies. The signing of the phase one agreement indicates a temporary detente, providing a relatively stable and predictable environment for the coming months — hopefully even longer.

It has also hurt U.S. businesses, farmers and families, with virtually 100 percent of the tariffs’ cost borne by U.S. importers, not China. An independent study in the U.S. estimated in September that the added tariffs on all imports from China would lead to 1.01 percent loss in U.S. GDP, along with 2.16 million American jobs and $2,294 annually for a four-member American family.

The phase one agreement is a good step in the right direction. It proves once again that trade and other differences between the world’s two largest economies, regardless of dimension or complexity, can only be productively addressed and solved through equal, rule-based consultations and negotiations. Unilateral punitive measures only aggravate the situation and harm both countries. As the agreement was completed after protracted, difficult and time-consuming consultations, it should be respected and upheld seriously by both sides.

Chapter three deals at length with quarantines and other technical issues hindering trade in food.

Chapter four explicitly lays out the non-discrimination principle for market access by U.S. in the financial services sector, including banks, insurance companies, securities traders and credit rating firms. It is in full accord with the new Foreign Investment Law of China, which took effect at the first of the year and applies to all foreign investors, not just those from the United States.

Chapter five focuses on macro-economic policies and the exchange rate mechanism. Both sides recognized the setting of monetary policy as a sovereign power of national governments and reiterated their commitment to IMF rules not to engage in competitive devaluation. A couple of days before the phase one agreement was signed, the U.S. Treasury Department dropped China from its list of currency manipulators.

Chapter six, which deals with trade expansion, is special, as there are uncertainties as to its implementation. It articulates quantities of Chinese purchases of U.S. goods and services for the next two years, with a commitment to increase purchases of U.S. manufactured goods by $77.7 billion, agricultural products by $32 billion, energy goods by $52.4 billion and services by $37.9 billion — all based on actual performance in 2017. Paradoxically, China, has long been criticized by the U.S. for its supposed “non-market” economy, when its economy is simply planned.

Are all these goals attainable? China’s global imports of goods increased by only $116.7 billion over the past five years through 2019. Can it increase imports by $162.1 billion from the U.S. alone in just two years? Chapter six also states clearly that both sides recognize that the purchase should be based on market prices and commercial considerations. Hence, the actual quantities of purchases will depend on the market and companies, not on the governments.

The phase one agreement certainly provides for a period of calm in bilateral trade relations and is a relief to the fragile world economy. However, it is only a preliminary step toward a total solution and full restoration of China-U.S. trade relations. Its effects, though very positive, are preliminary and limited. The existing additional U.S. tariffs on Chinese goods remain largely intact. The 25 percent additional tariffs on $250 billion Chinese goods in 2018 are unchanged. And new tariffs on $120 billion in Chinese goods, effective on Sept. 1 were only halved from 15 percent to 7.5 percent. As a result, the tariffs’ effect of pulling down two-way trade flows is still there. One cannot count on a sharp trade rebound under the phase one agreement.

The restrictions on high technology and Chinese investment in the U.S., which are not covered by the phase one agreement, remain unchanged and will continue to be a dark cloud hanging over the two countries. Uncertainty remains as well. Based on the past two years’ experience, one cannot exclude the possibility that, during implementation, the U.S. side could accuse China unilaterally for supposed failure to implement one of the clauses or sections; and when the dispute settlement fails, the U.S. could announce a new escalation unilaterally.

The more fundamental, and more difficult, issues —including dropping all tariffs, and structural changes in China — are left to phase two. It is of no importance when phase two talks start, because no one can see its end now. As the U.S. presidential election campaign gains momentum, the country’s domestic political ecology will most certainly include a basic China policy by both Republicans and Democrats. Therefore, while all efforts should be made for the best implementation of the phase one agreement, one should also be fully prepared for the worst.