Uncertainty About the Trump Tax Plan

The Trump tax plan, which was unveiled just on the eve of Donald Trump’s first 100 days in the White House, in essence reflected the Trump doctrine of “America First”. The plan focusing on wealth redistribution, however, is far behind expectations, and it is still highly uncertain whether or not it could be endorsed and implemented. 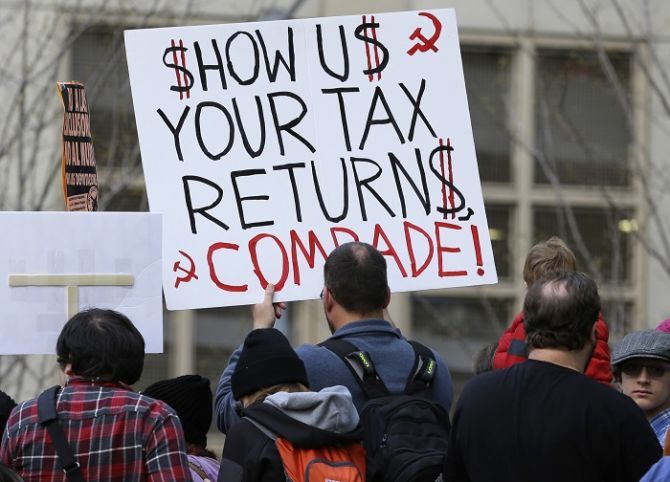 President Trump proposed dramatic cuts in corporate and personal taxes, and this happens to coincide with the strategy of “slim government” and tax cuts long advocated by the Republican establishment. The goals of his tax-reform plan, as Trump has repeatedly stated, are: first, cutting taxes for the middle class; second, significantly simplifying the tax system to relieve Americans’ burden in filing tax returns; third, trying to spur employments through the tax reform measures and making American enterprises more competitive in the global market; and fourth, not adding debts and deficits. As far as the last of the four goals is concerned, the outcome seems likely to be the opposite.

In fact, if the tax plan could be implemented smoothly as scheduled, the measure of cutting corporate tax to 15% would be able to significantly drive up the margins of corporate profits, but would also lead to a decline of $108 billion in US fiscal revenue in 2017, and $215 billion in 2018. According to estimates, comprehensive tax cuts in a time span of 10 years would reduce tax revenue by $4.4 trillion to $5.9 trillion. This would, no doubt, remarkably strengthen the global competitiveness of the United States. However, it would be difficult to gauge whether the expanded tax base, which is the outcome of economic growth spurred by the proposed tax cuts, could make up the drop in fiscal revenue.

According to relevant estimations made earlier by the Congress Joint Committee on Taxation, a drop of one percentage point in tax rates would lead to a loss of $100 billion in federal fiscal revenue in 10 years. Based on such estimations, a cut of 20 percentage points in tax rates, proposed under the Trump tax plan, would mean that the federal government would lose $2 trillion in fiscal revenue in 10 years, and would probably lead to a further rise in budgetary deficits. And according to latest estimates made by the US Tax Policy Center, under the Trump tax plan, the top tax rate for pass-through businesses would be slashed sharply, from 39.6% to 15%. The tax plan would mean a cost rise of $2.4 trillion for the federal government in 10 years. Coupled with various personal tax cuts promised by Trump during his campaign, it would mean an aggregate rise of costs of $9.5 trillion for the federal government. Subsequently, the federal deficits would balloon up to more than $1 trillion, and the peak of US debts in GDP would increase significantly from the previously estimated 89% to 111%. Furthermore, Trump during the campaign also proposed a $1-trillion investment blueprint for infrastructure construction (yet no specific plan has been unveiled to date). All the factors combined would dramatically increase US deficits and debt levels.

The debt ceiling is an issue that the tax reform plan could not possibly bypass. For a long time, the issue of debt ceiling has always been Achilles’ heel for the US government. The US system of debt ceiling, designed and adopted in 1917, is the practice under which the Congress approves a maximum amount of debt that could be issued for a certain period. A review of the history of US debts found that since 1940 when records became available, the US had raised the ceiling 104 times, virtually one upward adjustment on average every nine months, including 18 adjustments during the Reagan administration, eight times during the Clinton administration, seven times during the Bush administration and nine times during the Obama administration. Since the global financial crisis in 2008, the ratio of outstanding debt in GDP has been on the rise, already approaching a historic high. Data showed that by March 9, 2017, the scale of US debts had actually reached $19.86 trillion, close to the $20 trillion threshold.

However, the record proves that the debt ceiling has worked more like a bargaining chip in the struggles between the White House and the Congress, and between the Democratic and Republican parties. In order to prevent risks of government “shutdown” or “closure”, the US is likely to adopt the tactic of “debt extension” it had always used in the past. On April 30, Congressional negotiators from both the Republican and Democratic parties reached a deal for a $1.1 trillion government spending bill for the last five months of the 2017 fiscal year, which could help keep the federal government open till September 30. Treasury Secretary Steven Mnuchin has proposed to issue super-long government bonds to raise funds for government budgets.

However, the tax-reform plan still faces risks of being voted down. First, Congressional endorsement is needed to crystallize the plan. Both houses of Congress are dominated by the Republicans, but the Congress and the White House still could not reach full consensus on the plan, and some Republicans, known as fiscal conservatives, oppose adding any public debts and deficits. At present, House Speaker Paul Ryan hopes to cut the corporate tax rates to 20%, not 15%, warning that a cut of an additional five percentage points would make the final tax plan no longer tax revenue-neutral. This means that the Trump administration and Capitol Hill are still bargaining. In addition, according to the budgetary rules of Congress, the longest term for any tax cuts is 10 years, and revenue losses from tax cuts could not be completely supplemented through other channels. So, the Trump tax plan still faces uncertainties.

Donald TrumpEconomic Reform
printTweet
You might also like
Back to Top
CHINA US Focus 2018 China-United States Exchange Foundation. All rights reserved. Disclaimer