When the Art of the Deal Makes a Mess of Things 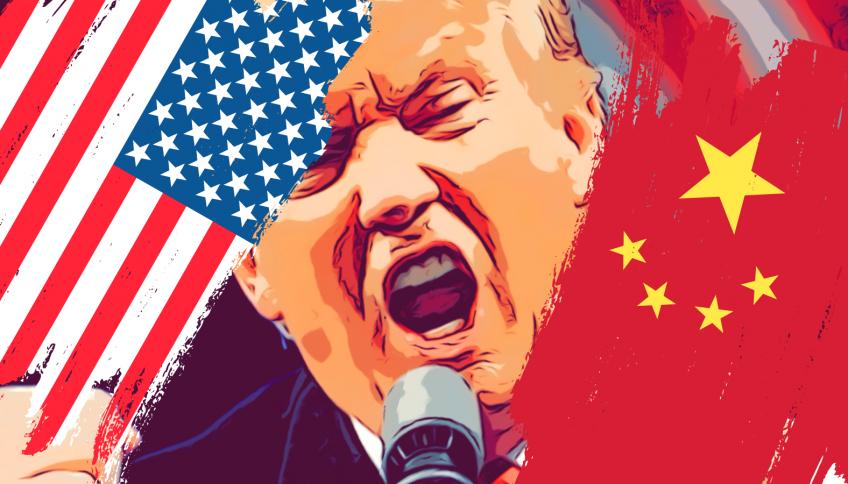 Trump brazenly slapped China with punitive tariffs despite a weak grasp of economics, not so much to fix things or even signal the start of a new cold war, but to make a dramatic play for all the world to see, especially his fan-base. See what I can do? How do you like that?

With each provocative play, he buys glee from his fans, notoriety for himself, confusion for his rivals and, importantly, in the case of a possibly ruinous trade war, he throws up a dust cloud that creates the time and space to disguise a retreat. That his policies are injurious to the nation as a whole, including his rhetoric-addled followers, merits no self-reflection.

Over and again we have seen Trump’s dynamic “art of the deal” in action. While careless, impetuous, and impulsive decision-making by the US president is not without consequence, his word is never the last word on a subject because he’s always changing his mind.

Any decent used car dealer and carpet merchant knows the dynamic: throw down the gauntlet with an outrageous opening bid, then cajole, wheel, deal and back-peddle, bringing it down to a point where a bad deal starts to look like a bargain even though it probably is not.

When it comes to diplomacy, Trump is infamous for ignoring intelligence briefings, fact books and the best advice available in favor of “going by his gut.” He says so himself. The results can be surprisingly effective, at least in the short run, because who knows what is in his erratic mind? One need only to review the president’s voluminous collection of tweets to note that he contradicts himself left and right, going through several good-cop, bad-cop mood changes in the course of a day.

China’s America-handlers recognized a transactional side to Trump’s apparent madness and seized on this as an opportunity in crisis. To China’s sophisticated, and sometimes ruthless diplomatic corps, Trump’s childish grandiosity presented a plus, as found in dealing with certain erratic, over-the-top African dictators; never mind the peacock feathers and preening egos if the deal gets done. China has a long record of dealing coolly with inequitable foreign regimes, thus the telling willingness to coddle the bombastic Trump right from the start.

While it proved facile, and unduly revealing of local practices, for Chinese deal-makers to think that giving concessions to the “princelings” in Trump’s orbit would win the day, the thrust of Beijing’s business-like approach was not far off the mark. Problem is, as greedy as Trump is when it comes to money, he’s even bigger on brand, brand Trump that is. What to do with such a man, essentially an emperor without clothes, who parades in front of the media mirror, ridiculous and exposed, thinking the world should think of him as he thinks of himself?

He is perhaps the most dangerous and belligerent president in history in terms of careless rhetoric, and as his friend Howard Stern concedes, the man needs some serious counseling.

A draft dodger at heart, he doesn’t like war, and there’s something to be said for that. There’s a hidden weakness there, or perhaps it might better be called a hidden strength. Trump has not taken the US to war, unlike his presidential predecessors Bush Sr, Bill Clinton, Bush Jr, and Barack Obama. He’s backed off from conflict with Venezuela and Iran and is loath to confront North Korea. Although he’s done Israel's bidding in the Mideast to a degree, he shirks from war with Syria or any other state actor.

That is not to say it does not give fright to listen to Trump speak. He taunts, jousts, feints, stabs and likes to brag; admittedly he is of a perverse bent that would allow for the use of scare tactics to mix it up and even bring the nation to the brink of war, if only for the sadistic pleasure of making the other side blink. But the world is basically at peace and global economies are beneficiaries of robust trade, and though some retrenchment seems inevitable now, the man’s bark has proved worse than his bite.

What the world needs to understand is that they are not dealing with a statesman, a weekend warrior or a man of ideas. They are dealing with a con from Queens with a chip on his shoulder, forever trying to prove himself Manhattan-worthy, a real estate developer who built a house of cards on bluster, brinksmanship and bankruptcy.

Lacking any coherent ideology, vision or backbone, Trump has shown an uncanny ability to stay at the top of the news cycle by playing each moment at the whim of the moment. His memory is short-term and inexact, which is not as bad as it sounds because it allows him to reverse course as necessary. Lack of consistency and apparent loss of face is not a factor, because he is skillful at suggesting, not entirely unconvincingly, that everything he does, good, bad and middling, is part of the deal.

The sudden reversal of apocalyptic threats against Mexico and a return to something very close to the status quo before the dust-up is a case in point. Trump's tendency to bluff, cave in, fold and announce himself the winner is well-documented. There is a pattern to his reckless, relentless shock treatment. You create a problem where one didn’t exist, causing much ink to be spilled, airwaves to be filled with fear, and pundits to be preaching the end, then you grandly offer your services to broker a deal, a deal to undo the damage you did, and declare a victory. Rinse and repeat.

As hard as it might be to get the genie of economic nationalism back in the bottle once resentments are whipped up on both sides of the Pacific, redirection is still possible at the top. Trump is actually well-positioned, and of a disposition, to extract himself from protracted economic warfare with China by making unexpected concessions, dressed up to look like points scored. His hardcore followers are primed to believe the most outlandish things, but it has to involve optics of his liking, so a successful Osaka meeting in late June will have to have a Mar-a-Lago equivalent of the “most beautiful piece of chocolate cake you’ve ever seen.”

The trade war might yet teeter out of control. But if Trump can be called on his bluff and diplomatically roped in by the tangle of his own lies and contradictions, the damage can be limited, even reversed. He’s predictably unpredictable, consistent in his inconsistencies, rewriting facts and redrawing lines to keep himself center stage under the lights. The best you can say about his presidency is that “if you don’t like it, wait until he changes,” because he gets bored easily and is always looking for a new drama to take a star turn in.

It’s not what the world, or most Americans, for that matter, want from the White House, but it’s what we got.

Trade WarDonald Trump
printTweet
You might also like
Back to Top
CHINA US Focus 2022 China-United States Exchange Foundation. All rights reserved.