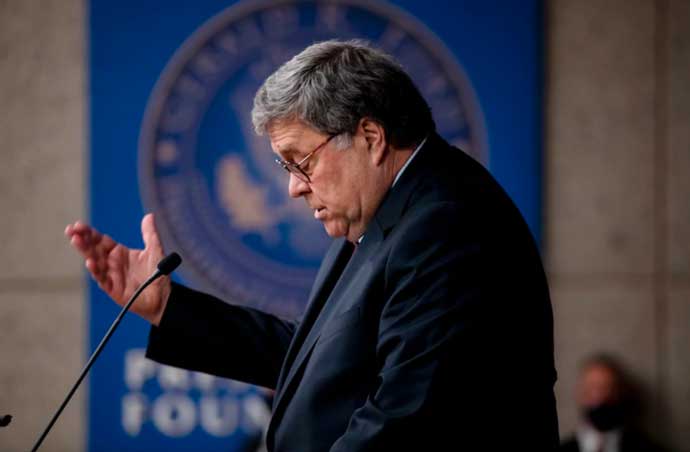 U.S. Attorney General William P. Barr delivered a China policy speech at the Gerald Ford Museum in Michigan State on July 16 — one of a series of recent speeches by ranking Trump administration officials regarding China.

Barr accused American tech giants and Hollywood of kowtowing to the Communist Party of China for short-term benefits.

“Hollywood now regularly censors its own movies to appease the Chinese Communist Party,” he said. “Many Hollywood films … have been altered one way or another to please the CCP.” He characterized it as “kowtowing” to the People’s Republic of China. The China-related speeches of other ranking Trump administration officials are rife with similar remarks.

A series of recent U.S. statements and actions regarding China have revealed one fact: The ghost of McCarthyism is again haunting the U.S.

American writer Mark Twain once said, “History doesn’t repeat itself, but it does rhyme.” Compare today’s U.S. with the country in the 1940s and 1950s: It feels like time travel. At the end of the 1940s, the curtain had just lifted on the Cold War between the U.S. and the Soviet Union. The U.S. was entering a second “red scare” stage and anti-communist thinking was all the rage in the the country.

The House Un-American Activities Committee (HUAC), which was established in 1938 to investigate “fascist and communist” sabotage, turned from a special investigating committee into one of House permanent committees, continuing to seek out “un-American” activities. Since the committee believed communism had infiltrated Hollywood, in the eight years starting from May 1947, it carried out political inquiries of the movie industry. A large number of playwrights, directors and actors were blacklisted and suffered political persecution. American screenwriter and novelist Dalton Trumbo, who created such movie classics as “Roman Holiday,” “The Brave One,” “Exodus” and “Spartacus” — along with nine others, known as the Hollywood Ten — was charged with contempt of Congress for refusing to testify during a congressional hearing and was subsequently imprisoned, igniting a public uproar.

The striking similarities of historical incidents didn’t stop there. On Feb. 9, 1950, Republican Senator Joseph McCarthy of Wisconsin delivered a hallmark speech in Wheeling, West Virginia, claiming he had a roster of 205 communists who had infiltrated the U.S. State Department.

The speech turned McCarthy into a red-hot anti-communist star. In the congressional midterm election in the second half of 1950, McCarthy traveled to 15 states to make 30 inflammatory anti-communist speeches. An “ism” was coined to capture McCarthy’s message, and the U.S. entered its McCarthy moment.

At the height of McCarthyism, the U.S. Congress passed the Internal Security Act of 1950, also known as the Subversive Activities Control Act of 1950” or the McCarran Act. It stipulated that communist organizations must register with the U.S. attorney general, that Communist Party members were prohibited from becoming U.S. citizens, that visas may not be issued for Communist Party members and that Communist Party members and any individuals affiliated with “authoritarian organizations” were prohibited from immigrating to the U.S. When President Henry Truman vetoed the act, he was overridden by both chambers of Congress and it became law.

It was later repealed, but now the Trump administration has taken back the script of 70 years ago and is replaying it. The successive China-bashing speeches by high officials within the administration are comparable to those of McCarthy. According to American media reports, the Trump administration is drafting a presidential order that will prevent members of the Communist Party and their families from entering the U.S., and may authorize corresponding government agencies to nullify visas already issued to those already in the U.S.. Such moves and ideas can indeed be traced to the Internal Security Act of 1950.

The current McCarthy moment is defined here as a moment is because it was short-lived in American history. The ghost of McCarthyism, however, has lingered. In accepting the Laurel Award for Screenwriting Achievement from the Writers Guild of America in 1970s, Trumbo provided a fitting footnote to today’s McCarthy moment: “The blacklist was a time of evil. … No one on either side who survived it came through untouched … It will do no good to search for villains or heroes or saints or devils because there were none; there were only victims.”

America now has one foot in a new McCarthy moment. The world is waiting to see where its other foot will fall.

US China PolicyUS-China Rivalry
printTweet
You might also like
Back to Top
CHINA US Focus 2021 China-United States Exchange Foundation. All rights reserved.