After Osaka, What Next? 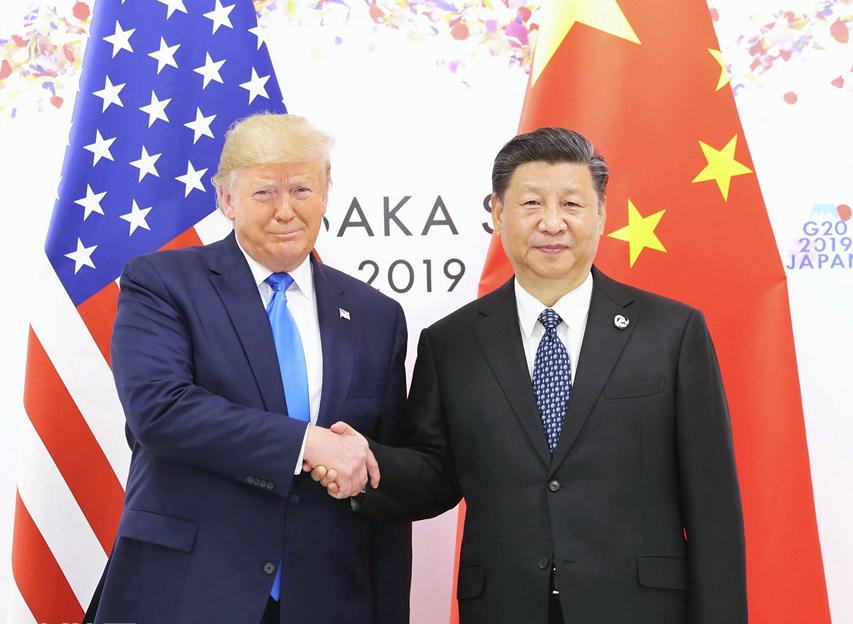 Presidents Donald Trump and Xi Jinping had an 80-minute meeting at the G20 summit in Osaka on June 29, where they agreed that the US would not levy additional tariffs on $300 billion of Chinese exports – the two parties are set to restart trade negotiations on the basis of equality and mutual respect. Trump said that talks were “back on track” after an “excellent” meeting with Xi, and the US is willing to reach a trade deal with China that is acceptable to both sides. At the subsequent press conference, Trump went on to say that he would allow US high-tech firms to continue selling products to Huawei, and that the US and China may even become “strategic partners.”

Considering the trade war’s increasingly conspicuous damage to both countries’ economies, what the Trump-Xi meeting achieved is encouraging. Yet given the frequent ups and downs in bilateral trade negotiations over the past few months, especially after the two leaders’ December 2018 meeting in Argentina, we have reason to worry that this may be a fragile “truce.” The prospects for trade talks remain volatile.

Just as former US Trade Representative Robert Zoellick said, Mr Trump’s deal-making is impulsive, based on his political assessment of the moment. If financial markets tumble, he is likely to trim his demands or at least pull back from the brink. The Trump administration is beginning to take a relatively mild approach to China as voices opposing the trade war are growing louder from US firms, consumers, and other business entities.

Although Trump has chosen “Keep America Great” for his re-election slogan, in fact he is still far from “Making America Great Again,” at least economically. Recent US economic indicators are less than satisfactory: newly added jobs were below 100,000 in May, while the Purchasing Managers’ Index for June showed both manufacturing and services dropping close to the neutral 50.0 threshold. According to a JP Morgan study, the likelihood of an economic recession in the US has risen to 45 percent.

In truth, Beijing worries that if US economic figures improve, the Trump administration may scrap all commitments it has made – the US might once again wield its tariff stick or resort to other malicious moves. This was precisely why Xi wanted to exchange ideas with Trump on fundamental issues regarding bilateral ties during their Osaka meeting. Xi made a special mention of “ping-pong diplomacy” – a historic episode that occurred in Nagoya, Japan in 1971 that played an essential role in thawing China-US relations. Xi emphasized that “cooperation and dialogue are better than friction and confrontation.”

From the Chinese perspective, the Trump administration’s mindset has gotten caught in the “myth of competition”; that is why trade negotiations have seen repeated setbacks. Many US moves against China in such fields as economics, diplomacy, and security even risk crossing China’s “red lines.”

First, the US has mistakenly emphasized competition as its strategic focus in relations with China. This single-minded pursuit of competition will throttle opportunities for cooperation. The Trump government once pledged to pursue a “constructive, results-oriented US-China relationship,” but that concept is no longer mentioned. Rhetoric about competition with China has permeated US government policy documents and Congressional hearings, as both Huawei and Chinese students in the US have fallen victim to competitive pressure. Though Washington still calls China a “competitor,” in practice it is already treating Beijing more as an “adversary.” The Trump administration needs to come up with a convincing vision of US-China relations to guide the process of crafting and implementing China policies for decades to come.

Second, following the notion that “economic security is national security,” the US is abusing the pretext of “national security” in handling economic ties with China, making bilateral trade frictions even more complex and difficult to resolve. American politicians not only perceive Huawei and its 5G equipment as a national security threat, but also claim that transportation facilities and subway vehicles manufactured by Chinese firms will undermine US national security. Confusing economic matters with security concerns is an important tactic used by China hawks pushing for the “decoupling” of the two economies. Chinese economist Yu Yongding assumes that America’s real intention is to elbow Chinese firms out of the global industrial chain and deprive China of its rights to development.

Third, the Trump administration lacks an accurate understanding of sensitive issues in Sino-US relations. Its excessive provocations against Beijing will further erode whatever mutual trust still remains. In order to ensure that the Trump-Xi meeting would proceed smoothly, the White House postponed Vice President Pence’s planned speech on Chinese human rights at the Wilson Centre, which reportedly would have touched upon Hong Kong. This is a delicate subject, as Beijing is convinced that the US has played a malign role in Hong Kong’s constantly escalating political turbulence. Further increasing tensions, the US Defense Department is set to carry out a new round of arms sales to Taiwan, while the Trump administration will reportedly soon be announcing sanctions on Chinese officials for the so-called “re-education camps” in Xinjiang. Such moves will create a new crisis for bilateral relations. In May, a senior State Department official openly proposed that the US must be prepared for a “clash of civilizations” between the US and China. Beijing is keenly aware that an ideological offensive targeted at the Communist Party of China is brewing in the US.

Finally, compared with the past few US administrations, diplomatic communication between Trump’s government and its Chinese counterpart has fallen to a historical low. Key individuals capable of effectively managing US-China tensions have consistently been absent from the decision-making process in the White House. Vice President Mike Pence has repeatedly delivered provocative speeches on China, while Secretary of State Mike Pompeo frequently makes malicious remarks concerning China – both of which have strongly angered Beijing. National Security Advisor John Bolton has long been a prominent anti-China voice, though he has never visited China, and is reportedly uninterested in communicating with Chinese officials. After David Stilwell’s appointment as Assistant Secretary of State for the Bureau of East Asian and Pacific Affairs, the chief officials in charge of China affairs at the State Department, Defense Department, and National Security Council have been all hawks.

As the 2020 presidential campaign heats up over the next few months, the political environment for the US to reach a trade deal with China may become even more unfavorable. Neither the anti-China camp nor anti-Trump camp seem willing to halt the trade war. Beijing undoubtedly has no way to steer the course of political battles in the US, and should concentrate instead on deepening reform and opening up at home. At the G20 summit in Osaka, Xi announced a series of new measures, including publishing a new negative list for foreign investment, implementing a new law on foreign investment, and improving complaint mechanisms for foreign-funded firms.

The Trump administration needs to realize that China was not, as Pence claimed, “rebuilt” by the US in the past few decades, nor will it be transformed over the coming decades in accordance with US wishes. In short, to truly put China-US relations “back on track,” Beijing needs to translate various commitments it has made since the Communist Party’s 18th National Congress into concrete actions, meanwhile, Washington needs to recalibrate its China policies, which remain stuck in “the myth of competition.”

Trade WarU.S.-China RivalryXi-Trump SummitG20
printTweet
You might also like
Back to Top
CHINA US Focus 2022 China-United States Exchange Foundation. All rights reserved.