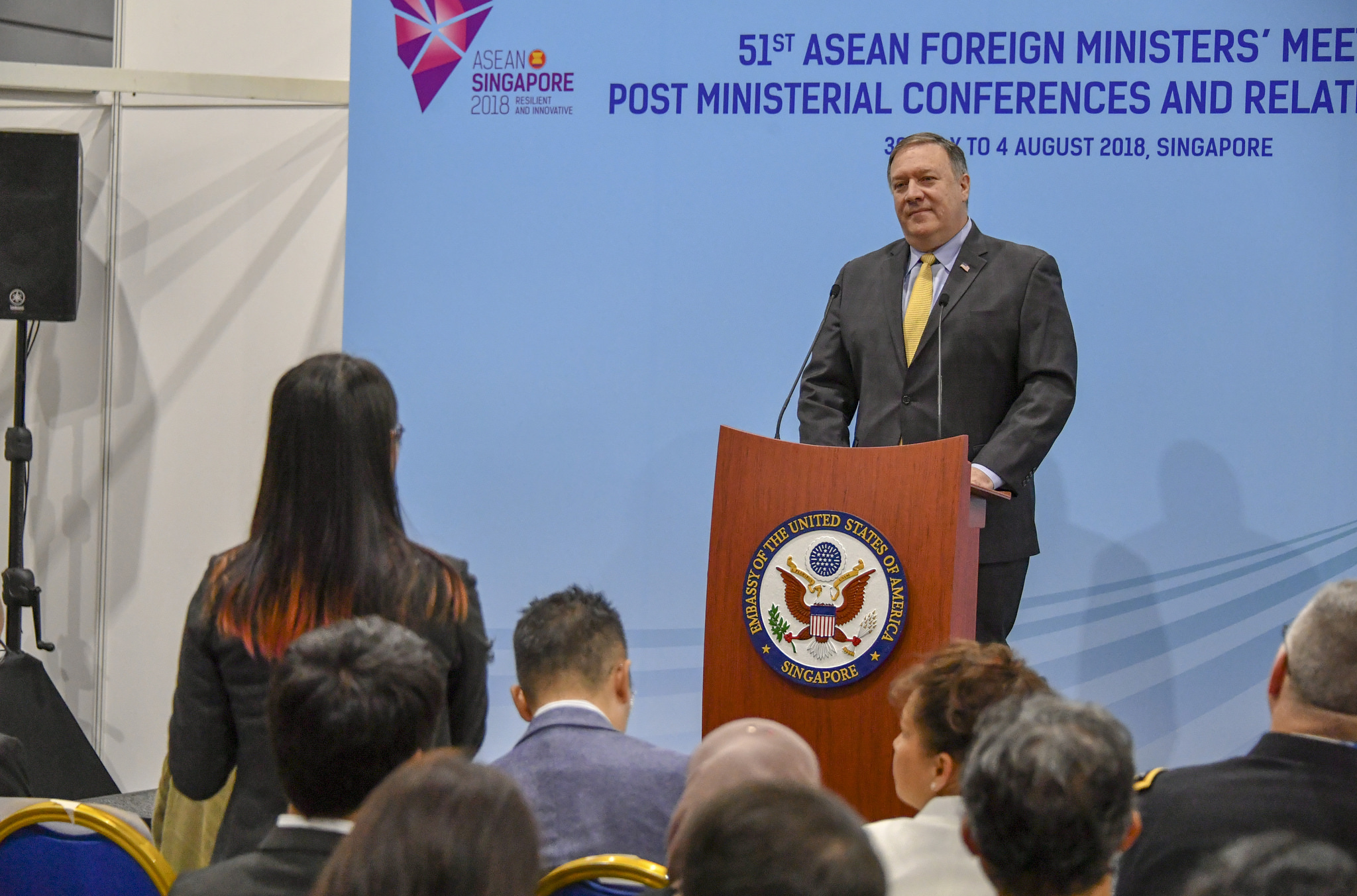 Early in August, U.S. Secretary of State Mike Pompeo co-chaired a U.S.-ASEAN ministerial session in Singapore. President Donald Trump and Vice President Mike Pence have both traveled to ASEAN nations during their tenures, but Pompeo’s inaugural visit has come amid worries about a trade war in East Asia. Pompeo expressed U.S. esteem for ASEAN and announced financial support, albeit on a token level: $113 million toward technology and energy initiatives. He later pledged nearly $300 million toward regional security with a focus on humanitarian aid, maritime security, and anti-terror efforts.

In response to Pompeo’s announcement, Chinese Foreign Minister Wang Yi confessed, “When I first heard about the $113 million, I thought I must have misheard. It should be at least ten times that; for a superpower, $1.3 billion, or even $13 billion wouldn’t be that much.”

Wang’s critique rings true. The paltry sum of $113 million for investment across ASEAN, even if only a down payment, raises questions about American intent for the region. If Pompeo’s assurances of U.S. commitment to the Indo-Pacific were to be believed, he could surely have produced something more substantial. Wang and his ASEAN counterparts likely suspect continued gaslighting from the Trump administration.

There are, however, through lines in the U.S. posture toward ASEAN that can be taken at face value. The Trump White House appears invested in ASEAN centrality in the Indo-Pacific, as opposed to American or Chinese hegemony of the region. The key to this approach is the development and promotion of a democratic rules-based structure in the region, and more specifically the shaping of a South China Sea Code of Conduct (COC). The chargé d’affaires ad interim at the U.S. Mission to ASEAN, Piper Campbell, called on August  7 for the incorporation of thirty parties in the COC, something echoed by Pompeo. Campbell’s appeals to the United Nations Convention on the Law of the Sea – which the United States has not ratified – may seem disingenuous, but China’s desire to exclude third parties from the COC structure is equally motivated by self-interest.

The ASEAN split on the COC hints at nations’ respective attitudes toward China and the United States. Brunei, Cambodia, Laos, and Myanmar have cast their lot with China by calling for third-party exclusion, whether because they have no outstanding territorial disputes or cannot afford to rankle Beijing. Malaysia and Singapore exemplify a more moderate path, both suggesting in the August 3 COC Single Draft Negotiating Text’s General Provisions that the geographic scope and terms may need to be defined in the future. The United States’ interests are most clearly aligned with those of Vietnam, which has repeatedly challenged the Chinese positions in the COC. Vietnam is eager to bind the COC to existing international law like UNCLOS and the Treaty of Amity and Cooperation in Southeast Asia, in the interest of limiting protective ambiguity around the legitimacy of unilateral moves in the region. Hanoi has been an outspoken critic of China’s island construction in the South China Sea, and of any establishment of military installations in the area.

Vietnam’s inclusion in the U.S. orbit has been solidified by its inaugural participation in this year’s Rim of the Pacific (RIMPAC) exercise, held in June. Considering also the disinvitation of Chinese forces, RIMPAC 2018 was reminiscent of the containment exercises used during the Cold War. While RIMPAC participants—including many from ASEAN—are invited individually, China has proposed joint military exercises with ASEAN at the organizational level. Given the mixed bag of attitudes among ASEAN nations toward China’s military presence in the South China Sea, military engagement that requires the participation of all ten member nations will be more challenging to achieve and maintain than RIMPAC. But Beijing needs to reach an amicable agreement on the COC and establish Sino-ASEAN military cooperation to achieve its other goal – the Regional Comprehensive Economic Partnership (RCEP).

If military presence has been a stumbling block for China and ASEAN, RCEP is the other side of the coin. Perhaps more than any other initiative, RCEP seeks to establish the Indo-Pacific as the world’s most cohesive and consequential bloc. Agreement on a COC draft may do very little to alter the status quo of South China Sea power dynamics, but it may give Beijing momentum for moving ahead on RCEP at a moment when its main rivals are sidelined. The United States was never a party to the agreement, but now India – an original signatory – may walk away from the table before the next summit in Singapore this November. Successful conclusion of RCEP negotiations without India would be a major step toward a unipolar Indo-Pacific economic zone, even given the participation of non-ASEAN nations besides China.

The outlook for ASEAN is cloudy, but its leaders have a chance over the coming months and years. First and foremost, they must decide whether they wish to pursue partnership with either China or the United States, or if they will attempt to balance the two powers without favoritism. At the core of this decision is an assessment of how Beijing and Washington each wish to remake world order: an empowered China will not cease military expansion in the South China Sea, while Trump’s America has been unreliable as a source of investment and a trading partner. If coming together behind either proves too great a challenge for the ASEAN states, they will have to be choosier about language for the South China Sea Code of Conduct and try to keep India placated during RCEP talks. There will also be room to engage other prospective partners for a multipolar Indo-Pacific, like Japan and Australia.

Given China’s obstinacy over the South China Sea, the United States could make a strong case that it is a better ally to ASEAN, if only Trump and Pompeo will make the effort. Above all, escalation in the trade war must be avoided and investment must be increased by many orders of magnitude. The bipartisan BUILD Act, which would create an International Development Finance Corporation with $60 billion in funding, would say much more than $113 million. In addition, President Trump’s cancellation of a proposed military parade to be held on November 10 will allow him to attend the plenary session of the 13th East Asia Summit after missing it last year. By then, factors like India, the U.S. midterms, and Chinese activity in the South China Sea will give ASEAN a better sense of its most attractive – or least unattractive – allies for the time being.

Indo-PacificCode of ConductU.S.-China RivalrySouth China Sea
printTweet
You might also like
Back to Top
CHINA US Focus 2023 China-United States Exchange Foundation. All rights reserved.