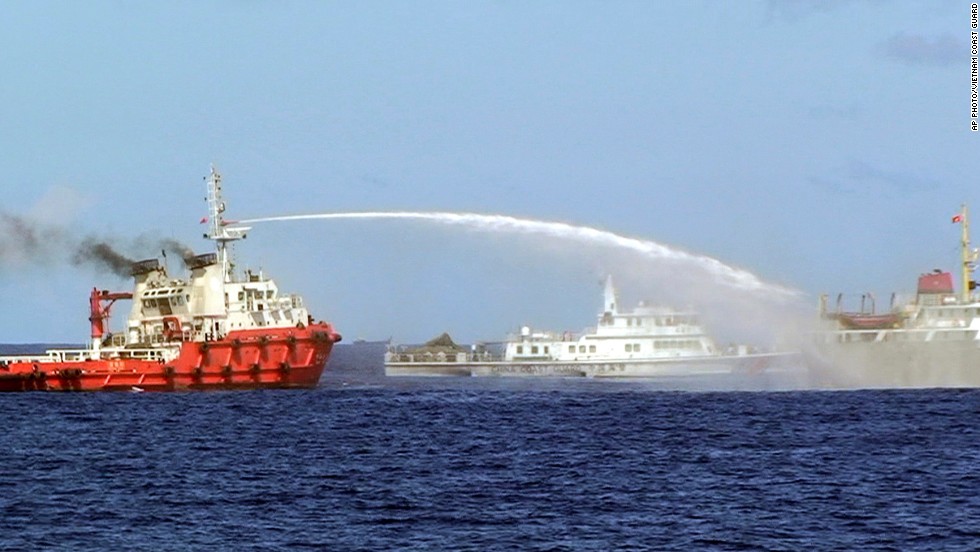 A Chinese ship fires a water canon at a Vietnamese coast guard vessel in the South China Sea in 2014.

A near-collision between the Chinese destroyer Lanzhou and the US Navy (USN) destroyer Decatur near Gaven Reefs on September 30, 2018 focused new attention on the potential for conflict in the South China Sea (SCS). Any accident in the SCS might be escalated into a crisis if it isn’t handled well.

The USN began to conduct Freedom of Navigation Operations (FONOP) in the SCS in October 2015 when the guided-missile destroyer USS Lassen sailed within 12 nautical miles of China’s islands and reefs. Up till now the USN has conducted 12 FONOPs in the SCS, four during the Obama Administration and eight during the Trump Administration. Each of the FONOPs was tracked, identified, and warned to depart by the People’s Liberation Army Navy (PLAN) ships and the recent one almost resulted in a collision. In addition to the USN FONOPs, Japan sent its Izumo helicopter carrier on a three-month tour of the SCS in May 2017, three Australian naval vessels transited the SCS in April 2018, ministers from France and the UK jointly announced that their ships would sail through the SCS to uphold the collective right to freedom of navigation at the June 2018 Shangri-la Dialogue, and the UK Navy sent ships to do FONOPs in the SCS. The USN’s increased frequency of and the other countries’ participation in FONOPs has increased the potential of accidents in the SCS, worsened the security situation there, and threatened peace, stability, cooperation, and development in the region.

Freedom of Navigation is a False Premise

The US, Australia, Japan, France, and the UK asserted that they conducted FONOPs in the SCS to ensure freedom of navigation and peace and stability. In fact there has never been a problem of freedom of navigation and the sea had remained peaceful and stable before they began to conduct FONOPs. China has been supporting and protecting commercial freedom of navigation all the time because the great majority of the trade flowing through the SCS flows to and from China and China has no interest in disrupting its own trade. Hence the US FONOP is merely a false premise. Instead of what the US and its allies asserted, the FONOPs caused instability. First, the FONOPs entered the 12 nautical miles of China’s territorial waters and the PLA had to send warships or fighter jets to defend China’s territory. Second, the FONOPs have encouraged the other claimants like the Philippines and Vietnam to consolidate their illegally occupied islands and reefs, which makes China’s maritime territorial dispute with other claimants even more difficult to solve. Third, the FONOPs interfered with the making of the Code on the Conduct of Parties in the South China Sea (COC). China and ASEAN began to negotiate the COC on the basis of the Declaration on the Conduct of Parties in the South China Sea (DOC) in 2013 and didn’t reach consensus on a consultative text draft until August 2, 2018, because of the interference of the FONOPs. Fourth, the sensationalization of the FONOPs into China’s territorial water by Western media has drawn the world’s attention to the SCS and disgraced China, which instigated Chinese nationalism and forced the Chinese government to respond accordingly.

UNCLOS Should Be Respected and Improved

The United Nations Convention on the Law of the Sea (UNCLOS) came into force in 1994 and now has 166 member signatories. The convention allows a signatory to include formal declarations and statements when ratifying it. China signed the UNCLOS in 1982 and ratified it in 1996. When ratifying it, China listed five declarations, including China’s sovereign rights and jurisdiction over its exclusive economic zone (EEZ) and the continental shelf, and its sovereignty over all the islands it had claimed in its 1992 Law on the Territorial Sea and the Contiguous Zone. Nearly 30 countries including Vietnam and Malaysia have made similar statements. All these declarations made by China and other countries constitute an integral part of the UNCLOS and should be effective and respected. Though not a signatory, the US should also respect and abide by the UNCLOS. However, instead, the US challenges it by conducting the so-called FONOPs. In fact the US and China mainly disagree on three points, that is, “innocent passage in territorial water”, “military operations in the EEZ” and “excessive maritime claims”. To solve these differences the US should first of all sign and ratify the UNCLOS and then try to improve the UNCLOS through consultations and negotiations with the other member states. It is 36 years since the creation of the UNCLOS and it is time to improve and perfect it. Before the UNCLOS is improved and perfected, the US and its allies had better cease their FONOPs or at least reduce their frequency to maintain peace and stability in the region.

Concrete Measures Should Be Adopted to Avoid Accidents

All parties involved should take some concrete measures to avoid accidents in the SCS. (1) The US and China should implement the Military Maritime Consultative Agreement (MMCA) concluded in 1998. (2) The Code for Unplanned Encounters at Sea (CUES) reached by 21 countries at the 2014 Western Pacific Naval Symposium should be put into practice by all ships sailing in the SCS. (3) Relevant countries should accelerate the process of COC making and make it legally binding. (4) Strengthen exchanges and cooperation in maritime affairs, maritime scientific research and maritime tourism to increase mutual trust and dissolve differences. China should also construct military installations to provide protection for freedom of navigation and build civil facilities to provide public goods such as maritime rescue, navigation aid and supplies for all ships sailing in the SCS With such joint efforts accidents can be avoided in the SCS.

South China SeaASEAN
printTweet
You might also like
Back to Top
CHINA US Focus 2022 China-United States Exchange Foundation. All rights reserved.