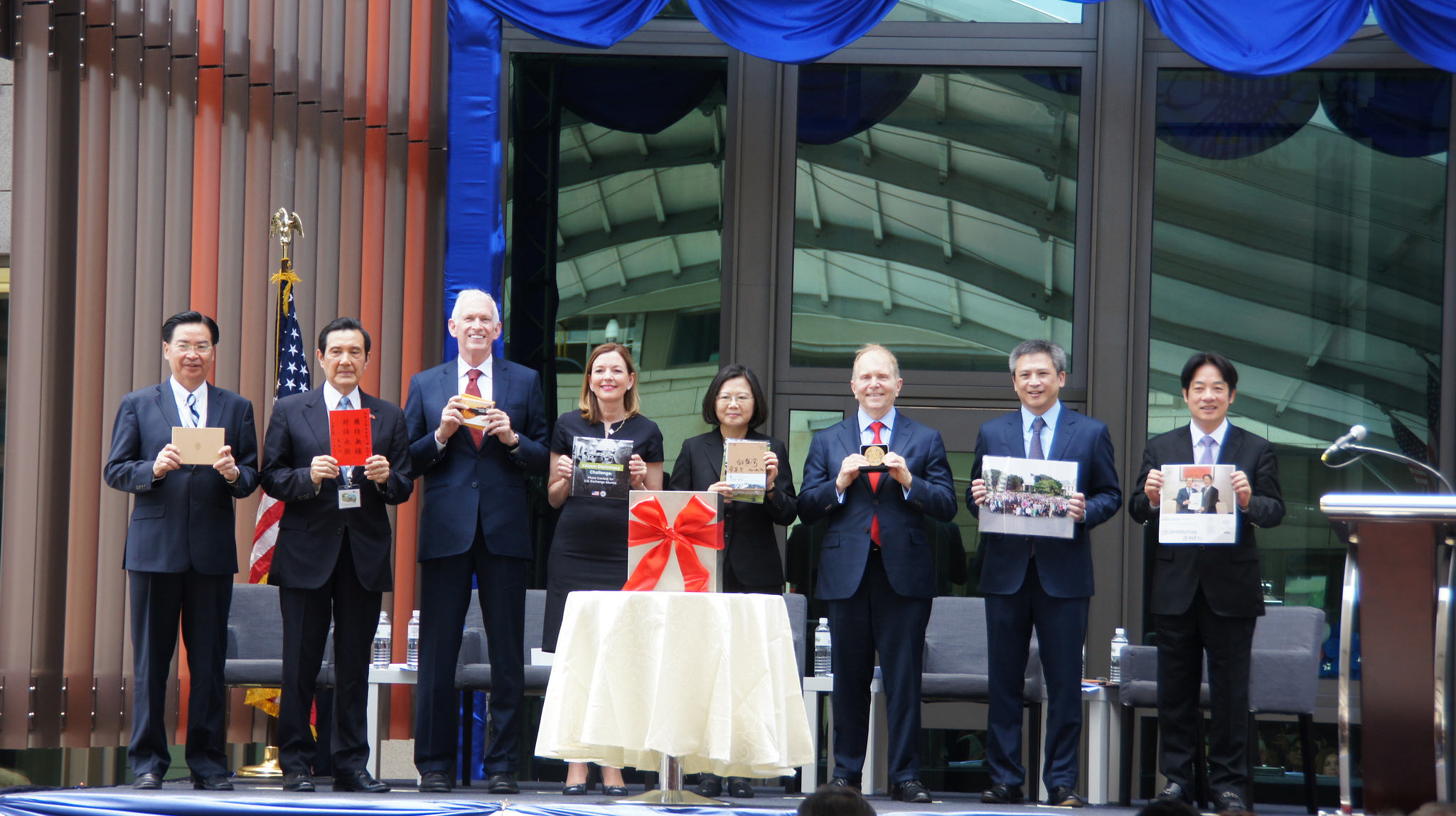 Dedication Ceremony at the American Institute in Taiwan in June 2018.

Since the 2016 election of Tsai Ing-wen as president of the Republic of China (commonly known as Taiwan), Beijing has resumed and even intensified its policy of trying to isolate Taipei diplomatically; inducing the island’s remaining friends to recognize the People’s Republic of China (PRC) instead. During the previous eight years when the conciliatory Ma Ying-jeou led Taiwan and pursued a cooperative policy toward the mainland, the PRC eased its campaign. But Chinese leaders immediately regarded Tsai and her Democratic Progressive Party (DPP) as the vanguard of pro-independence aspirations on the island, and they moved to adopt an aggressive strategy of diplomatic strangulation. During her tenure, five of the 22 countries (mostly small, poor nations in Africa and Latin America) that still recognized the ROC when she took office have switched ties to Beijing.

Although the PRC’s strategy appears to be achieving its primary objective, it may ultimately come at an unacceptably high price. American supporters of Taiwan are pushing back firmly, and they are moving to increase Washington’s support of the island’s de facto independence. Two incidents that accompanied Beijing’s “success” in inducing El Salvador, the latest target, to sever diplomatic ties with Taipei, should alert PRC leaders to the danger.

One was the response of the U.S. ambassador to El Salvador, Jean Manes, who stated in a Twitter post that the United States was concerned about El Salvador's "worrisome" decision to break ties with Taiwan. "Without a doubt, this will impact our relationship with the (Salvadoran) government,” she wrote. That is a surprising and troubling comment containing an implicit threat of adverse repercussions for El Salvador because its government dared to terminate diplomatic relations with an entity that even the United States does not recognize formally. Granted, Manes is a relatively low-level figure, and her staunchly pro-Taiwan comment may not accurately convey Washington’s official stance; although a later State Department statement did say that the United States was “deeply disappointed” by El Salvador’s decision. In any case, such sentiments did not indicate U.S. enthusiasm for the one-China policy.

Potentially more troubling for Beijing was the growing evidence that Mane’s attitude is widely shared within the American political and policy communities. Senator Cory Gardner (R-CO), chairman of the Senate Foreign Relations Committee’s Asia subcommittee, indicated that he planned to introduce a measure encouraging countries to stick with Taipei. Among other things, he stated that his legislation would authorize the State Department to take actions such as downgrading relations or altering foreign assistance programs to discourage countries from making decisions seen as adverse to Taiwan. The threat to dilute aid programs is more than a little menacing to poor countries that depend on U.S. economic assistance. “The Taipei Act of 2018 would give greater tools and directions to the State Department in making sure we are as strong a voice as possible for Taiwan,” Gardner told Reuters.

His decision is not intended to be a minor, symbolic gesture. Gardner’s is an important voice on Asia policy in the U.S. Senate, and proposing such legislation would substantially increase Washington’s identification with Taiwan’s interests and policy goals. But his action is simply the latest in a series of efforts in both Congress and the executive branch to boost U.S. support for Taipei. Some of them even have military implications.

American backers of Taiwan are becoming more vocal and proactive in pushing U.S. measures to counter the PRC’s increasingly hardline policy toward the island. Conservative Republicans seem especially enthusiastic about doing so, but growing concern about Beijing’s intentions regarding the beleaguered democracy is broadly bipartisan. A major step occurred in March 2018 when President Trump signed into law the Taiwan Travel Act, which encouraged “officials at all levels of the United States Government” to visit and meet with their Taiwan counterparts and to “allow high-level officials of Taiwan” to enter the United States and to meet with their U.S. counterparts. That legislation, which overwhelmingly passed both houses of Congress, ended Washington’s practice adopted when the United States recognized the PRC in 1979 of authorizing meetings only with relatively low-level Taiwanese officials. It was especially noticeable that the new law specifically promoted interaction between “cabinet-level national security officials.”

Some proponents of closer U.S. ties with Taipei hold key policy posts in the Trump administration. Before he became National Security Adviser, John Bolton was on record suggesting that Washington redeploy some of its forces stationed in Okinawa to Taiwan; a step that would be exceedingly provocative to Beijing. In early July, the Pentagon sent two U.S. warships through the Taiwan Strait; the first such passage in more than a year, in a display of support for Taipei. That move occurred on the heels of a State Department request that the Defense Department send a small contingent of Marines to guard the American Institute in Taiwan (Washington’s de facto embassy in Taipei). Further, the United States invited two senior Taiwanese military officials to participate in a May ceremony at the U.S. Pacific Command. Tsai conducted a prominent visit to the United States in August, engaging in several high-profile meetings and giving a major speech in Houston. Her reception was reminiscent of the one given to the last DPP president, Chen Shui-bian, during George W. Bush’s administration, and international observers noted Tsai’s growing support in Congress and elsewhere in the U.S. government.

Any one of these episodes might not be all that significant but taken together they suggest that Washington’s backing for Taiwan is increasing. Beijing can blame itself for much of that development. The PRC’s strategy of diplomatic strangulation is backfiring, and the surge of Chinese military exercises in the Taiwan Strait is making matters even worse. Tsai and her government have adopted a stance of outright defiance, making it clear that Taipei will not be bullied into taking steps toward reunification with the PRC.

Instead of pushing Taiwan toward making concessions, Beijing’s actions are alarming the United States and leading to multiple U.S. steps, both symbolic and substantive, that demonstrate Washington’s determination to help the island maintain its de facto independence. The U.S. measures in turn are angering Beijing and exacerbating serious bilateral tensions that already exist because of other issues, such as trade disputes and South China Sea controversies.

Beijing would be wise to dial back its confrontational policies toward Taiwan. However, Taiwan’s supporters in Congress, the media, and the Trump administration need to fully appreciate how sensitive the Taiwan issue is to PRC leaders and the Chinese people. Excessive U.S. diplomatic support for Taiwan, much less the kind of reckless steps that Bolton and other hawks suggest such as stationing U.S. troops on the island, undermines Washington’s one-China policy and could bring the PRC and the United States closer to a dangerous crisis. Both sides need to exercise much greater caution and restraint than they have displayed recently.