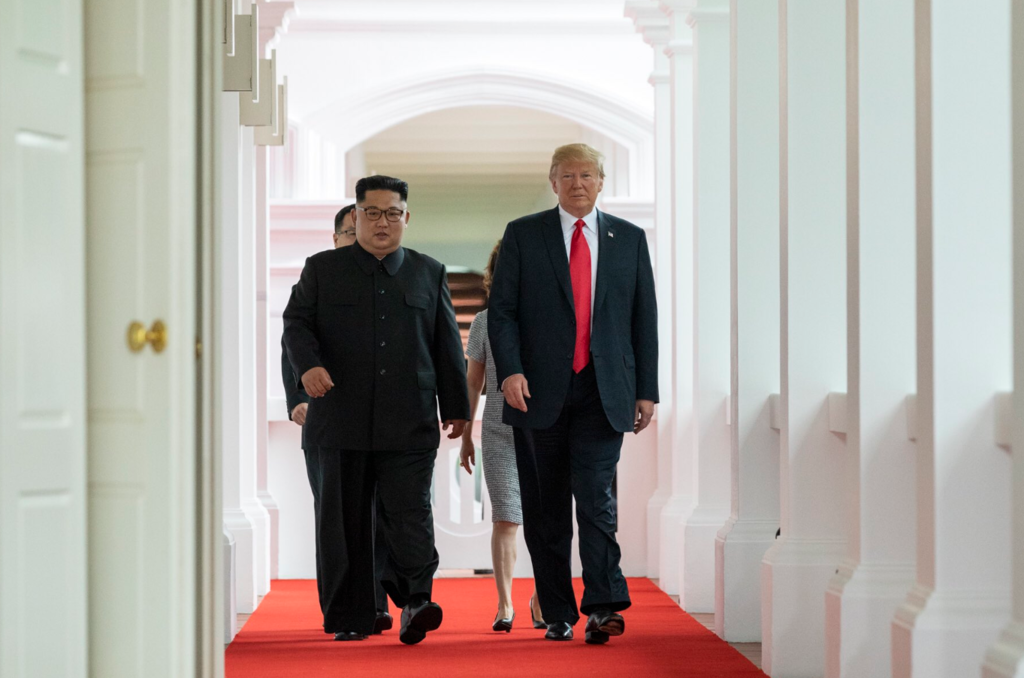 The Summit focused on measures to ease military hostilities between the two Koreas. The two sides signed the Agreement on the Implementation of the Historic Panmunjom Declaration in the Military Domain. Both sides decided to expand the cessation of military hostilities to transform the Peninsula into a land of permanent peace and to promptly activate the Inter-Korean Joint Military Committee to prevent accidental military clashes.

The North promised to permanently dismantle the Dongchang-ri missile engine test site and launch platform under the observation of experts from relevant countries. The North expressed its willingness to continue to take additional measures, such as the permanent dismantlement of the nuclear facilities in Yeongbyeon, as the U.S. takes corresponding measures.

The two sides agreed to hold a ground-breaking ceremony within the year for the east-coast and west-coast rail and road connections. They also agreed, to first normalize the Gaeseong industrial complex and the Mt. Geumgang Tourism Project, and to discuss the issue of forming a west coast joint special economic zone and an east coast joint special tourism zone.

Kim changed his schedule that day to welcome Moon at the Pyongyang International Airport and hosted the summit in the headquarters of the Central Committee of the Workers' Party of Korea for the first time. Before the meeting, a joint liaison office had been set up at the Kaesong (Gaeseong) Industrial Zone.

Then there was the Singapore Summit between Kim Jong-un and the U.S. President Donald Trump. The Trump-Kim Joint Statement was not smoothly implemented as the Trump Administration pressed the North to, in an impractically short time, abandon its nuclear capabilities and hand over ballistic missile programs as the U.S. wishes. Besides, the U.S. has been unwilling to make concrete commitments to conclude a peace treaty and provide a security guarantee, which the North demands.

Trump’s delay made Kim restless as he was eager to practice the policy adjustments decided at the 7th Party Congress and the Third Plenary Meeting of the Seventh Central Committee of the Workers' Party. DPRK-US relations yielded no practical progress with no breakthrough made in negotiations. Consequently, the North’s longing for softer sanctions could not be fulfilled and there was no way for foreign capitals to flow in to improve its economy. In fact, the Trump Administration has been continuing its negotiations with the North while insisting on sanctions against it since July. Besides, the U.S. has been spreading through the voice of intelligent agents and mass media that the North is still operating its nuclear equipment in secret. It also increased maritime patrol forces with Japan, South Korea, Australia, the UK, and France in the hopes of cutting off the DPRK’s sea routes to prevent its attempts to dodge sanctions by smuggling special supplies and fuels.

Under these circumstances, North Korea can only rely on South Korea, China, and Russia for help.

For months, Kim has had his schedule booked up inspecting production and public facilities and giving instructions for work across the country, signaling his firm determination to shift the focus of governance to economic development. Kim once considered visiting Russia's Vladivostok for the 4th Eastern Economic Forum. He also extended a sincere invitation to Chinese President Xi Jinping to attend the 70th anniversary of the founding of the DPRK on September 9th. In the end, China designated Li Zhanshu, Member of the Standing Committee of the Political Bureau of the CPC Central Committee and Chairman of the Standing Committee of China's National People's Congress as the special representative of President Xi to visit North Korea. Despite this, the North still made good use of the opportunity to carry on and develop friendship with China.

The delay in the follow-up discussions after the Singapore Summit also upset Moon’s government. In the spirit of idealism, Moon has gambled all this political life on improving the North-South relations, with strong expectations from his people and pressure and increasing doubts from the opposition. Moon began the revival of the Sunshine Policy to greatly improve its relations with the North, however, moving faster than the U.S. with inadequate communications. This elicited discontent from the Trump Administration who had warned it before the third Kim-Moon meeting. Under pressure at home and abroad, Moon had no way out but to push forward for peace in the Peninsula to vindicate his strategies and decisions.

Kim and Moon climbed Mount Paekdu together on the second day of the Summit and raised each other’s hands above their heads for photographs on the shore of the Heaven Lake. Intending to give Moon something to hand over to Trump, Kim agreed to accept international supervision in dealing with nuclear missiles. Having heard of the news, Trump tweeted “Very exciting” as appreciation.

However, it remains a question whether the two Koreas have the power to determine the destiny of the Peninsula.

In the larger picture, the results of the third Kim-Moon summit can only be regarded as a “minor step”. The key to the future of the Peninsula still lies in negotiations between the U.S. and the DPRK. As the U.S. doesn’t intend to guarantee North Korea’s security and the North is not in a position to satisfy the U.S.’ requirements for nuclear missile suspension, other parties can only abide by the sanctions imposed by the United Nations Security Council’s resolutions. There is almost no way to provide economic support for the North through “grey areas” and it is difficult to incorporate the North into the rest of Northeast Asia.

China is inclined to play a greater role coordinating the Peninsula’s denuclearization. However, the Trump Administration has been keeping a wary eye. With escalating trade conflicts and declining strategic relations between China and the U.S., China is faced with a dilemma about whether to help the U.S. or not.

The US and the DPRK are still keeping in touch on the second Trump-Kim meeting. The meeting may take place when Kim Jong-un attends the UN General Assembly for the first time. Trump could also send a direct invitation to Kim to visit the White House. No matter how it will take place, the ball is back in the U.S.’ court for now. The Peninsula’s peace prospects depends on the sincerity of the U.S.

Korean PeninsulaNorth Korea
printTweet
You might also like
Back to Top
CHINA US Focus 2022 China-United States Exchange Foundation. All rights reserved.