Shape the World Order Together 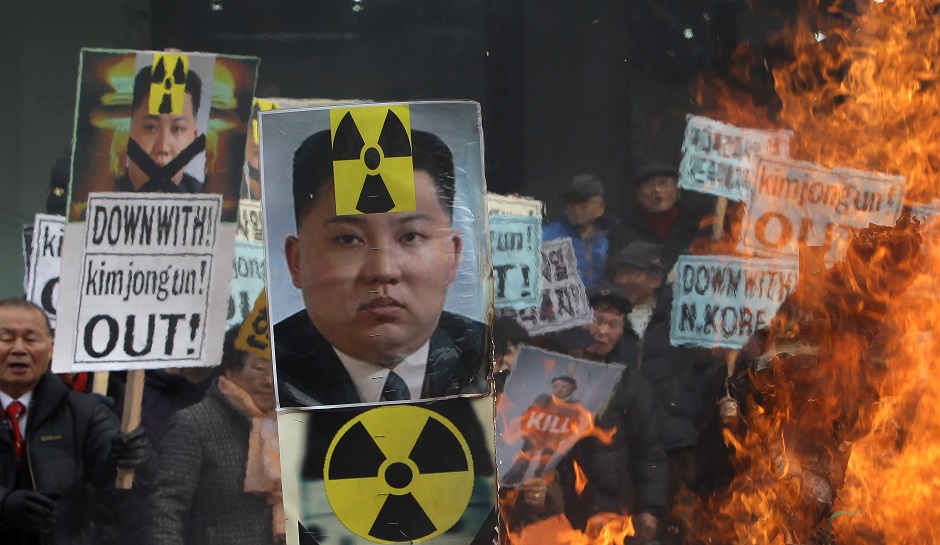 The United States has played a leading role in the construction of the Post-WWII order, based on a mixture of liberal norms of globalization and the Westphalian principles of state sovereignty. But President Trump’s rejection of globalization, coupled with his isolationist version of "America First," have made the U.S. a challenger to the same order that it founded.

Taking advantage of President Trump’s turn away from globalization and global leadership, China has stepped in to play an increasingly important role in global governance. This shift raises the question: if China is to assert itself in its region and further afield will it undermine, or even replace the U.S.-led world order?

President Trump’s isolationism has indeed presented an opportunity for China to pick up some of the slack in the global governance. But China is not ready to replace the U.S. leadership role because not only is China far from the position to overtake the U.S. hard power, but moreover China cannot effectively deploy soft power. To fill the leadership role without being well prepared could be risky. Embracing the Westphalian principles of state sovereignty, the fundamental norms of the Post-WWII order, while adapting to the emerging transnational norms, China is dissatisfied not with the rules of the current order, but rather its status in the hierarchy as a rule-maker. China and the U.S. can negotiate to increase China’s voice without altering the principles of the existing order.

Chinese Criticism of the U.S. Dominance

China has often criticized the U.S.-led world order as unfair and unreasonable in meeting the needs and interests of China due to American dominance. First, because many of the rules and norms were created in the context of American predominance to conform to American values, China is regarded as an outlier by Western powers for not being a democracy. Therefore, China has resisted the advances of a global order that seeks to impose liberal political values and infringe on China’s domestic affairs.

Second, China has expressed discontent with under-representation in global governance. The U.S. share of the world GDP has come down from about a half at the end of WWII to about 25 percent, while China’s share has increased from less than two percent to about 15 percent. China, therefore, has demanded the change in the global governance system to allow China greater voice and weight.

Third, China is uneasy with U.S. double standards in compliance to international rules. Since World War II, the U.S. has worked hard to build international norms and rules only to guide actions of other states and has resisted submitting to the rules it hopes to bind others to. Washington has urged China to comply with the Permanent Court of Arbitration ruling on the South China Sea dispute. But the U.S. Congress has never ratified UNCLOS. Washington has insisted China to obey the rules that it has refused to accept.

China Stepping Up in Global Governance

In response to U.S. dominance, President Xi has sought to provide Chinese solutions, wisdom, and voices to global governance by launching new initiatives like One Belt, One Road (OBOR) and the Asian Infrastructure Investment Bank (AIIB). The Chinese Communist PartyPolitburo devoted two study sessions in 2015 and 2016 to the subject of global governance. Xi stated at the first session that China’s objective was to position China in the commanding heights of the international competition. At the second session, he called on China to strengthen its capacities in four areas in international affairs: rule-making, agenda setting, public opinion shaping, and coordinating.

In the meantime, Chinese leaders have sought to communicate internationally  on China’s approach to governance. After President Trump was elected, President Xi made a speech at the World Economic Forum in Davos in January 2017, where, rather than focusing on China domestic economy, an uncontroversial subject that Chinese leaders usually talk about abroad, he elaborated on  China’s ambition as a champion of globalization.

One month later, President Xi made clear at the State Security Commission meeting that China should guide the international community to build a more just and reasonable new world order thus safeguarding international security. Xi’s remarks represented a departurefrom China’s previously stated  intention of not leading in global governance.Xi then hosted 29 heads of government and a bevy of other foreign dignitaries at theBelt & Road international forum in Beijing in May 2017 to celebrate China's ambitious initiative. In his remarks during the conference,Xi urged the international community to reject protectionism, embrace globalization, and pull together like a flock of geese.

Not Ready to Overtake the U.S.

To some observers, China’s rhetoric showed Beijing’s attempts to advance its interests and overtake the U.S.-led order. But China is not ready to overtake the U.S.. First, global leadership is costly, requiring hard resources to provide public goods. A fragile rising power, facing immense internal hurdles that have the potential to derail its rise, China does not have the same capability as the U.S. to shoulder financial, economic, military and political costs of global leadership. Although President Trump promised an "America First" doctrine that distanced Washington from its traditional allies and took a step back from a stewardship role, the U.S. remains the most powerful nation in the world and cannot avoid the responsibility of using its military and economic might to provide public goods and security protection for its allies. American companies are woven thickly into global value chains. American producers and consumers would suffer from protectionism at home and from other countries' retaliation. The internationalists across the U.S., checks and balances in the U.S. constitution, and the country's open society all serve as counterbalance to Trump’s isolationism.

Second, global leadership requires vision, creativity, perseverance, deft diplomacy and other soft power elements to commend willingness of other countries to align, and in some cases subordinate, their own narrow interests to those of the larger international community. China is far from the position to step into America’s shoes and effectively deploy soft power by projecting its values, principles and ideals that others identifywith and aspire to share. China might one day overtake the U.S. in terms of its size of the economy, but can hardly overtake the U.S. influence and leadership in the world any time soon.

Third, China has benefited and continues to benefit from the U.S.-led world and regional order. Residing in a neighborhood with jealous national rivalry, historic grievances, animosities, and suspicions, China’s behavior has to be measured and judicious. America's long-standing role in regional security enabled it to paper over many differences. With the uncertainty of U.S. presence in the region, old animosities may well break out again. China often expresses concern over the U.S.–Japan alliance. But the alliance is part of the regional security architecture that has prevented potential remilitarization of Japan. Without the U.S. nuclear umbrella, Japan would have developed nuclear weapons a long time ago, prompting South Korea, Vietnam, and even Taiwan to develop their nuclear weapons. It would be a nightmare for China if that happens.

With a long way to go before it becomes a viable alternative to U.S. leadership, China remains a stakeholder in the U.S.-led global order. After the election of Donald Trump, China has pledged to continue honoring the Paris deal on climate change and work together with other members of the international community to address global governance challenges. But China is a revisionist stakeholder, actively reinforcing and shaping elements of the order to advances China’s status as a rule-maker in the hierarchy.

China was primarily a rule-taker or a “free-rider” for a long time. As the second largest economy in the world, China has to take more responsibility in the international realm. Americans have for some time encouraged China to contribute more to global public goods as a responsible stakeholder. China’s new initiatives, such as the AIIB, represent an assumption of responsibility as much as a declaration of privilege, but do not amount to discrupting  the existing order. Although these new initiatives may give China more leverage as a revisionist power, they can resemble that of its many antecedents aimed at transforming the global system that are either languishing in obscurity or being integrated into the existing system.

For example, Western commentators feared that China would use the AIIB for narrow political and economic ends. With a diverse group of 50 founding members, however, the AIIB did not become an agent on behave of the Chinese interests. Modeling the governance structure and standards after the World Bank and emphasizing on transparency, accountability, openness, and independence, the AIIB has come more or less in line with the practice of the established institutions on the environment, society, disclosure, procurement, debt sustainability, and oversight mechanism. One year after its formal operation, the AIIB disbursed multi-million-dollar loans in half a dozen emerging economies. Twenty countries from around the world were approved to join the organization in 2017, bringing the bank's total members to 77, more than the Asian Development Bank, becoming the second largest multilateral development institution folloing the World Bank.

Learning to Work Together

As Beijing acquires more capabilities, it will certainly attempt to alter some of the power relationships that have defined the post-WWII order. But China’s interest is in reforms rather than rewriting the norms and principles. The differences between China and the U.S. are not primarily over the rules but whether China has obtained the prestige and status as a rule-maker  compatible with its rising power and influence.

In this case, the U.S. should welcome China to takes on greater responsibility and leadership. After all, what seemed to be the natural order of the post-World War II period when the U.S. accounted for around half of the global GDP is not sustainable when its share droped to about 25 percent. As China demands a new disposition of power without replacing the fundamental rules, the U.S. may negotiate with China to reform institutions and patterns of global governance premised on overwhelming American primacy, taking into account the rise of others.  It is in the  interest of the U.S. to assiduously use the institutions, norms and regulations the U.S. and its partners crafted to meet China’s demands to a sufficient degree that the China would be satisfied with its status in the existing order. Entangling in a web of multilateral institutions, China’s national interest may dictate the use of its growing power in consistent with peaceful change in the order.

China also has a learning curve. Although Chinese civilization originated the idea of statecraft at roughly the same time as the great classical thinkers in the West, China has limited experience to participate in the modern international system as an equal partner. For most of its history, China had either been an imperial power dominating its neighbors or a victim of imperialism. The successful reform of the world order, therefore, would very much depend on China’s learning curve as a revisionist stakeholder, assuming that Chinese nationalist sentiment would not trump rationality. It would also depend upon America’s ability to enforce the rules whilst meeting China’s demands through negotiations to increase China’s voice and weight, tweaking some rules. If China and the U.S. can work together, they may play constructive roles together in peacefully shaping the world order.

Global GovernanceGlobal Economy
printTweet
You might also like
Back to Top
CHINA US Focus 2018 China-United States Exchange Foundation. All rights reserved. Disclaimer