China and the U.S.: Two Styles of World Leadership

The recent spate of summit meetings for national leaders, first the G20 in Hangzhou and then ASEAN and East Asia Summit in Vientiane Laos, rather dramatically displayed the contrasting style of world leadership between China and the U.S. China President Xi’s message to the world was to propose cooperation and collaboration. Obama’s message was to suggest that the rest of the world should follow the lead of American exceptionalism. 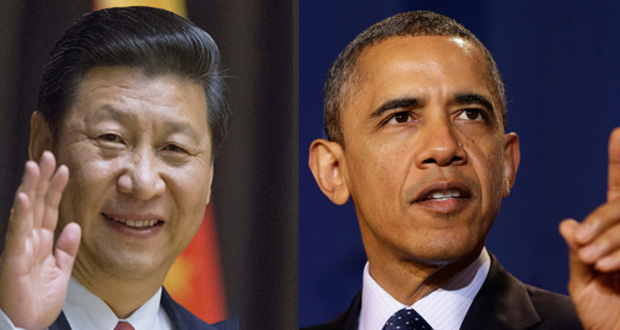 The two leaders did agree to abide by the Paris Accord on limiting emission of greenhouse gases. Since China and the U.S. were world’s largest two emitting countries, this joint accord was an influential and important step in encouraging others to follow their lead. On other issues, the two countries took divergent paths.

As the host nation in Hangzhou, China got to set the agenda and gave the opening address. Xi’s said to the conference of leaders that China must no longer depend on old ways of achieving economic growth but must change its economic growth model by becoming a country of innovation and a leader in science and technology.

Having taken 700 million out of poverty within China, which represented about 70% of world’s poverty, Xi went on to say that China’s future economic growth would continue to contribute to the global fight against poverty. It wouldn’t just mean taking more Chinese from poverty but helping other peoples out of their state of poverty as well. That was the reason he launched the land and maritime Silk Road initiatives.

The so-called One Belt, One Road initiative was to improve the infrastructure along the way from East Asia to Western Europe and all points in between.  The Asia Infrastructure Investment Bank formed concurrent to the OBOR for the purpose of facilitating the launching such projects has already begun financing some of the projects.

Improving the infrastructure of the countries on the Silk Road would invariably improve the livelihood of the people in those countries. Xi observed, “It is meant to build not China’s own backyard garden but a garden shared by all countries.”

Xi stood firmly on the side of open trade and investment in the age of economic globalization. Repeatedly, he emphasized that it will be essential to seek win-win models of global growth, that all nations large or small, rich or poor must be treated equally with respect. “The world will be a better place only when everyone is better off,” he said.

Because of conflicts and turmoil, a pandemic refugee crisis, climate change and terrorism, the world’s economy needs a new path for growth. Xi believes that path lies in technology innovation.

China is of course already a successful example of sustaining economic growth via technology innovation. China has 20,000 km of high-speed rail, the world’s largest network, and the longest open water bridges (nearly 100 miles long). These are some of the indicators of technological innovation and development.

On its own, China has sent man into outer space, put a lander to roam the moon and built its own space station. Just recently, China launched the world’s first ever quantum communications satellite. China has also developed its submersible technology such that they can now explore the ocean floor deeper than 4 miles below as well as outer space.

For six years in a row, the world’s fastest super computer belongs to China. China now leads the world in new applications for the mobile phone and new uses via the Internet. China’s economy no longer depends on sweatshops. On the technology muscle beach, China is not the 97-pound weakling.

China’s netizens have been having some fun circulating a speculation that the U.S. Navy withdrew from the South China Sea in July for a very good reason. They claimed that the Beijing government had quietly informed Pentagon that China’s missile firing submarines had their radar locked in on the American carriers and strongly suggested that the American fleet vacate the area.

The Pentagon asked the American fleet command for confirmation and the command was amazed to discover that indeed some radar had locked in on the carriers. However, the American on-board finder could not locate where the locking radar was coming from. Thus they quietly hightailed out of the South China Sea.

Imaginative and fanciful perhaps, but if true, this incident is entirely consistent with China’s practice of Sun Zi’s Art of War, namely, the best way to win a battle is not having to fire a shot. I do know that nearly 20 years earlier China did follow another dictum from the Art of War, namely know yourself and know your adversary—albeit in this case China was helping America practice the art of war.

Thomas Reed, an expert on nuclear weapons and former Secretary of Air Force, reported in September 2008 issue of Physics Today, that China in mid-1990’s had intentionally sought out and invited Danny Stillman of Los Alamos to tour China’s nuclear research facilities, which he then did on a number of visits to China.

China’s nuclear scientists while visiting the U.S. found out that Stillman was responsible for gathering intelligence on China’s capability on nuclear weapon development and was thus the contact China wanted. Then Stillman got his book on China’s state of nuclear weapon technology ready for publication but the U.S. government quashed it.

At the time, the Clinton Administration was busy prosecuting Dr. Wen Ho Lee of Los Alamos alleging that he stole weapon related secrets for China. Publication of Stillman’s book would have been, at minimum, “inconvenient.” Poor Stillman had to settle for telling the story to Reed years later.

Obama came up empty in Hangzhou

President Obama as he headed to Hangzhou China for the G20 conference had planned on several one-on-one meetings on the sideline with other leaders, in addition to the high profile tea with President Xi. Consistent with his mission as defender of human rights, he was planning to express his concerns to Philippines President Duterte over the thousands of extra-judicial executions of drug lords.

Upon hearing of Obama’s intention, Duterte flew into a rage saying among other things that Philippines is a sovereign nation and no longer a lap-dog of the U.S. As for human rights, he asked rhetorically, what about the hundreds of thousands of civilians massacred by the American soldiers when the U.S. forcibly took over from the Spanish and became the colonial master of Philippines?

Duterte also called Obama the “son of a whore.”  Thanks to the Colbert Report, we now know that Duterte was not the first to use such indelicate language. Another exceptional U.S. president, Ronald Reagan, had called Gorbachev then leader of USSR the same name in his moments of extreme emotion.

Obama’s meeting with Turkey’s President Erdogan also did not go well. Erdogan in front of the foreign press aired his difference with Obama including naming a Kurdish group that the U.S. supports but Turkey considers a terrorist organization. (Of course, Asia Times has reported on numerous occasions that rebel groups fighting Syria’s Assad with U.S. support also fights for Islamic State.)

Perhaps not wishing for another Duterte-like confrontation, and perhaps the price of offending Turkey would be too dear, Obama did not raise questions of human rights in Turkey with Erdogan—human rights issues such as crackdown of the press and the mass arrests that followed the unsuccessful coup.

Obama then proceeded to Laos to attend the ASEAN Summit. He was the first U.S. president to visit Laos and he formally apologized for the “secret” war America inflicted on Laos during the Vietnam conflict. At the time, the Pentagon thought that the North Vietnamese was transiting their supplies through Laos to reach their troops and the Viet Cong in the south. The thinking was that the carpet bombing of Laos would put a stop to the flow of supplies.

Long after the end of the Vietnam War, Laos continues to suffer from the aftermath of the massive carpet-bombing by the U.S. Air Force. Decades later, millions of unexploded cluster bombs remain in the countryside. When unwitting farmers and their children accidentally detonate these, the flying shrapnel and projectile have the same deadly affect as landmines and antipersonnel bombs.

Obama’s offer of $30 million per year for three years would barely scratch the surface of the kind of effort that would render Laos’ countryside safe for farming and allow Laos to begin economic recovery. But that’s the oft-repeated tragic consequences of innocent countries and people that got too close to America’s exceptionalism.

To date, the United States has refused to halt the use of cluster bombs. The U.S. reserves the right to kill and maim and at the same time make obscene profits from it.  As Christina Lin pointed out in Asia Times, the U.S. even today has been selling cluster bombs to Saudi Arabia to drop on Yemen. Unexploded cluster bombs will someday bedevil the civilians of Yemen as another Laos.

It’s the ultimate irony that the great defender of human rights is also the dominant purveyor and user of lethal takers of human life.  The conscience salving token donations to compensate for the past atrocities and human suffering is a drop in the bucket compared to the profits made on the victims’ bone piles.

Obama went to Vientiane to convince the ASEAN countries to take a united stand on South China Sea against China’s position. As New York Times reported, Obama wanted to “put the long-simmering dispute in the South Chin Sea front and center on the agenda at the regional summit.” The ASEAN summit ignored his request and made no mention of South China Sea in their closing statement.

Just the opposite took place. The two leading statements of the concluding Vientiane Declaration from the East Asia Summit read as follows:

“Acknowledging that efficient and sustainable infrastructure development in ASEAN is essential for trade, investment and service competitiveness in the Asia Pacific region;

“Recognizing that infrastructure decisions and investments made in coming years will be vital to efforts to meet our shared objectives to strengthen the global response to the threat of climate change, in the context of sustainable development and efforts to eradicate poverty….”

These statements virtually mirror the sentiments expressed by Xi at the G20 and represented a vote of confidence in Xi’s idea of infrastructure investments. The member states were not being swayed by Xi’s eloquence. They became believers of the benefit of collaborating with China because of what they have seen. They have already seen China’s hand in railway projects in Thailand, Laos and Myanmar and separately in Indonesia, hydropower project in Pakistan, port improvement project in Sri Lanka, and revitalization of port of Piraeus in Greece.

Except for South Korea, whose President Pak apparently preferred Obama’s offer of high altitude missile umbrella defense over the benefits of economic cooperation with China, other Asian countries do not see it that way. They see that the American involvement in the Middle East has not left any country better off. Rather they see that the European countries through no fault of their own having to deal with a refugee crisis of gigantic proportions. They see that the American interference in Libya has destabilized that region and left the Italians having to fish drowning refugees out of the sea every day.

The distinction is clear. Xi Jinping offers cooperation and collaboration on a path for common prosperity, no military alliance required nor offered. Obama offers umbrella of missile defense protection and a path to death and destruction, no economic benefits on the table because Uncle Sam is plain broke.

G20 HangzhouXi JinpingingObamaGlobal Governance
printTweet
You might also like
Back to Top
CHINA US Focus 2018 China-United States Exchange Foundation. All rights reserved. Disclaimer