China Is a Stakeholder in America’s Success

The following is the transcript of Mr. David Firestein's speech at the Forum, which has been edited for style and brevity. 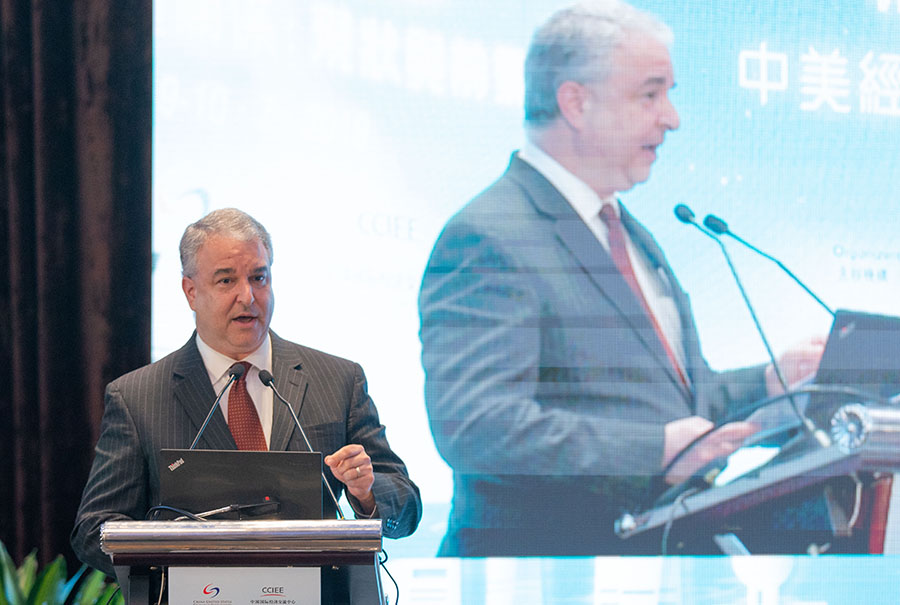 Mr. David Firestein made the speech at the ‘U.S.-China Trade & Economic Relations: What Now, What Next’ Forum in Hong Kong on July 10, 2019.

Today, we see in the United States “a fight for the very heart and soul of the US-China relationship.”

Is China a mortal enemy of the United States, or is it an indispensable partner? Is there an inherent contradiction between China's rise and America's security and prosperity? Or can these two countries succeed at the same time? Can the Chinese dream and the US doctrine of global primacy exist in the same time and space? Or is the world simply not big enough for both nations to coexist peacefully, while realizing their full potentials? These are some of the profound questions at the core of the current US debate about China.

At the George H.W. Bush Foundation for US-China Relations, also known as the Bush-China Foundation, we know where we stand on these questions. We take our cue from one of the greatest statesmen the modern world has ever known, President George H.W. Bush, who categorically rejected the idea that China is an enemy of the United States. On the contrary, President Bush articulated in 2007 a very different vision for the relationship: “I love the Chinese people,” President Bush wrote, “one of my dreams for our world is that these two powerful giants will continue working toward full partnership and friendship that will bring peace and prosperity to people everywhere.”

No one here needs to be told how great a gap there is today between the George H.W. Bush vision for the relationship and the prevailing sentiment toward China among an important segment of the Washington DC elite.

This gap is manifested not only in the substance of US policy, but also in the style with which that policy is formulated and implemented, and indeed even in the degree of importance attached to having a factual basis for policy decisions.

What we are seeing in the United States today is the greatest retreat from the limited government, pro-market, pro-trade principles of Ronald Reagan and George H.W. Bush, ever seen since Reagan left the Oval Office in 1989. President Trump would rather give American farmers government handouts than allow them to earn income through trade with China. In essence, he is nationalizing the US agricultural sector. President Trump is giving US farmers an income they don't need with money America doesn't have.

In terms of style, President Trump's erratic lurching from one policy position or viewpoint to another, often a contradictory position or viewpoint, undermines the two vital conditions that undergird global trade: consistency and predictability. One case in point, on one day, just a week or so ago, the US ban on trade dealings with Huawei was purely a matter of national security and thus non-negotiable. Literally the next day, it became a trade matter, and the ban was partially lifted. Such fickleness severely damages US credibility, and I would argue, ultimately, weakens our negotiating position on a host of issues.

But apart from the substance and style of US policy and discourse regarding China, the thing that I find most astonishing is the divorce of so much of our contemporary US discourse on China, including the content of President Trump's own statements from any factual basis.

The reason that President Trump gets so much wrong in his handling of China policy is because so much of his policy is based on alternative facts, known in some circles as “demonstrable falsehoods.”

Here, listen to these statements, all of which have been repeatedly made by President Trump himself or other influential Americans associated with this approach to China: The deficit with China is $500 billion. This level of US importation of Chinese goods and services represents an act of theft by China of our national wealth. China pays the Trump tariffs, not American consumers and producers, and thus Chinese money is pouring into our national coffers like never before. China is interfering inappropriately in our politics and electoral process. Confucius Institutes are nefariously and unlawfully infiltrating our campuses and our society. Almost every Chinese student in the United States, according to President Trump, is a spy. The list could go on and on. All of these statements have something in common. They are completely unsubstantiated. And in the case of statements of alleged fact, they are demonstrably and irrefutably false.

With this in mind, what I think, many myths about the current negativity towards China in the United States are two fundamental points. First, this hyper-negativity is largely – perhaps almost entirely – an elite phenomenon, not an organic grassroots phenomenon. And second, and this statement may surprise someone who may disagree with it, the negativity, while fairly widespread within the DC elite community is actually not very deep, probably because so much of the negativity is predicated on false premises, and because on some level people see through that. Perhaps the most important data point is that the China-bashing we have witnessed in the United States over the last 20 months or so, has had, thus far at least, very little perceptible impact on US public opinion towards China. As has been reported in the Washington Post, whose editorial line on China is perhaps even tougher than that of President Trump, US sentiment towards China is still fairly middle of the road, just as it has been for the last 25 years.

This is no ordinary time in US-China relations

As all of us are aware, this is no ordinary time in US-China relations. We have a Republican US President and up until January of this year, a Republican Congress leading the retreat from the principles of limited government, free trade, globalization, and indeed the very concept of comparative advantage itself. We have a US President who has focused obsessively on reducing the US trade deficit with China, but who now presides over the largest merchandise deficit the United States has ever had with China, and the largest overall foreign trade deficit ever logged in the 243 year history of the United States. We have the US administration that is now adopting many of the practices that previous administrations, under both political parties, have long chastised China for engaging in, effectively adopting some of China's worst practices as best practices to be emulated. And we have a President who decries the fakeness of the news, but whose virtually every substantive pronouncement on China has been deemed by fellow Republicans, including his own advisors, to be factually false.

We are officially in the territory of the surreal. To be sure, the current tensions in the US-China relationship do not lie solely at the feet of President Trump and his advisors and allies. China does in fact, bear considerable responsibility for the present state of US-China relations. I don't think any of us in this room would disagree with the basic assessment that there has in fact been a substantial asymmetry and lack of reciprocity in the US- China trade relationship. In fact, that's incontestable.

In an interview this morning on CNBC, I shared the view that China should move to become as open to US goods and services as the United States has been in recent decades to Chinese goods and services. There's plenty of room for improvement on the Chinese side in this regard.

Indeed, I largely agree with Dr. Edwin Feulner's assessment of the key issues. Where I strongly disagree with the current US administration is, regarding the best prescription for addressing those problems, the administration is dangerously off course. Framing China as an enemy of the United States or self-fulfillingly turning it into one would be among the grandest and most tragic strategic blunders in the history of the United States of America.

Like many of us in this room, I, my colleagues, and the Bush China Foundation, aim to do all in our power to prevent the United States from making this foolish and self-destructive choice. And here, let me hasten to add, I oppose the current US administration's approach to China, not because that approach is bad for China, but because it is bad for America. And I hold President Trump accountable, not for his failure to achieve David Firestein's objectives, but for his failure thus far to achieve his own.

But let me conclude on a faintly positive if perhaps slightly contrarian note. The presidential election of 2020 is going to be different from recent presidential elections in one key China-related regard. Rather than having an exacerbating and polarizing impact on US discourse on China, it is more likely going to have a moderating and tempering effect on that discourse. Why? Because in my view, President Trump can be the tariff president, or tariff man as he puts it, or he can be a two-term president. But he cannot be both. I believe President Trump is increasingly becoming aware of the binaries of the strategic political choice now in front of him. And that's why I believe we will see over the course of this year, and perhaps into early next year, some level of resolution of the trade issues now rocking the US-China relationship.

We in the United States need to do a better job of keeping in our mind a set of seemingly contradictory twin truths, that I think the Chinese mindset can somehow more easily accommodate at the same time. Namely, that China is both a tremendously formidable competitor to the United States, and also, an indispensable partner to the United States and major stakeholder in our success. By being cognizant of the essential veracity of both of these statements, we can – and I believe over time we will – get our approach to China right and get this relationship right.

There is still a viable pathway to a US-China relationship that is functional, mutually beneficial, and politically sustainable. For the sake of ourselves and our posterity, I pray that our leaders will have the vision and the wisdom to see that path and to take it. Let's all help them do just that.