Developments and Prospects of the RCEP 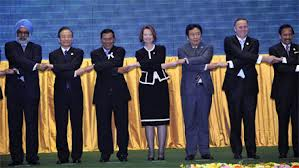 The idea of a RCEP is not new. It was at first mooted at the 19th ASEAN Summit in November 2011. The goal is to remove trade barriers within the group. Once built up, the RCEP will likely cover half of the world’s population, and the economic aggregate is expected to approach US$ 20 trillion. This means it will be the largest free trade area.

Although various frameworks for economic cooperation with diversified goals and designs have been proposed for the Asia Pacific region, the RCEP is still irreplaceable. The ASEAN and China are key supporting forces. The ASEAN seeks to maintain its leadership in the regional cooperation, while China will persist in its position of respecting and strengthening the leading role of the ASEAN in the regional cooperation.

The RCEP Is Irreplaceable in the Current Regional Cooperation

At the East Asia Summit (EAS) this year, US President Obama promoted free trade between Asian nations and the US, in which the discussion of the TPP was included. The TPP involves some countries in the region including Vietnam, Malaysia and Singapore.

While Japan is enthusiastic in participating in the TPP, the country is also active in promoting the East Asia Free Trade Area (EAFTA) and the Comprehensive Economic Partnership in East Asia (CEPEA). At the same time, the talks for a free trade agreement among China, Japan and South Korea are under way, even in the context that these three countries are embroiled in territorial disputes.

Many analysts are concerned of the “Spaghetti bowl” phenomenon, in which the regional cooperation will be bothered by complicated and overlapped regimes. In this situation, the role and function of the RCEP will be weakened. However, the fact is that the RCEP has its own prominent advantages and will not be easily overtaken or replaced by other alternatives. Its advantage is obviously reflected in its flexibility. It allows for decisions to be made through any agreed modality and enabling special and differential treatment of ASEAN members, which enables a more generous consideration of each nation’s interests and needs. In contrast with the high threshold of the TPP, the RCEP will be more attractive for the ASEAN countries, since quite a few ASEAN countries are not members of the rich country club.

The ASEAN and China Are Important Supporting Parties for the RCEP

Since the ASEAN is trying to maintain and strengthen its leadership in the regional economic cooperation under competition, calling for the construction of the RCEF is an effective approach. The removal of trade barriers within the RCEP is expected to be achieved by 2015.

Except for a variety of alternative cooperation regimes mentioned above, the US rebalancing strategy also has an impact on the centrality of the ASEAN in regional cooperation. In 2012, the US extensively implemented its rebalancing strategy in Asia-Pacific. After being re-elected, Barak Obama has confirmed that the rebalancing will not be replaced and Asia will remain a policy focus of the US. Actually, the US has succeeded in strengthening the ties with some ASEAN members. Recently, the US has made it clear that more attention will be paid to the economic field. Under the situation, the ASEAN is in urgency to form a framework of cooperation, in which the ASEAN plays the leading role.

China is an important driving force for achieving the RCEP. China always respects and supports the leading role of ASEAN in the regional cooperation. At the same time, China is concerned about the TPP that excludes China. Up to know, the nature of the TPP is still ambiguous and it is presumed to be part of the US program to contain China. Therefore, it is natural for China to support RCEP in reaction to the potential risks. Chinese Prime Minister Wen Jiabao reaffirmed in the EAS in November this year that China would fully supports efforts of the ASEAN nations to push forward the building of the RCEP.

The future of the regional cooperation is still faced with uncertainties. The factor that matters is the increasingly serious competition between different interest groups and cooperation mechanisms. However, another possible solution is that various frameworks including the TPP and the RCEP will co-exist. With appropriate communication and cooperation, these mechanisms will be able to avoid vicious competition.

ASEAN EAS RCEP TPP
printTweet
You might also like
Back to Top
CHINA US Focus 2018 China-United States Exchange Foundation. All rights reserved. Disclaimer