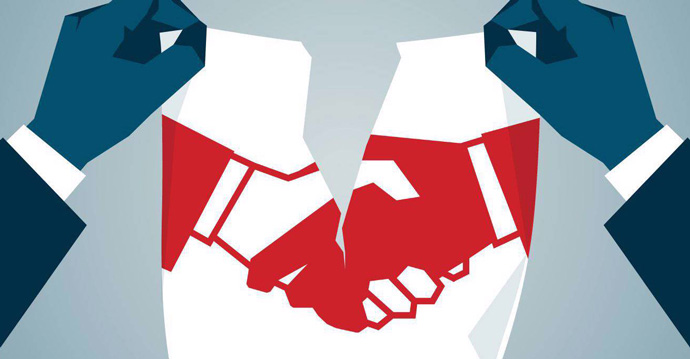 In both China and the United States, decoupling has become a buzzword in academic circles.

Most people on the Chinese side make two quick judgments — that decoupling is not good, and China and the United States are too interdependent to be decoupled.

Indeed, if decoupling means that bilateral trade and cultural exchanges fall to zero, or are reduced to the level of the U.S. and the Soviet Union during the Cold War, that kind of decoupling will not happen. But if decoupling refers to a strategic orientation, meaning that the breadth and depth of Sino-U.S. exchanges are limited or even reversed, then decoupling not only exists but has been there for some time. And it may become more pronounced in the future.

Over the past few decades, China and the United States have been interdependent in the same international system, and increasingly so. However, they have suffered a serious lack of mutual strategic trust because their political and economic systems are so vastly different. In addition, the gap in their relative strength has been shrinking. For practical reasons, they have become increasingly guarded.

In short, China and the United States are interdependent and interconnected, but they do not trust each other. The more they are coupled, the more insecure they feel.

In the China-U.S. relationship, China has been relatively weak, so it has long worried about the side effects of the coupling. The side effects may include a U.S. threat to China’s political security or a color revolution against China. In addition, China is also worried that it will become technically dependent on the United States, leaving a large number of “backdoors” open to U.S. monitoring and reconnaissance, as Edward Snowden revealed.

The United States has long been in a strong position; thus, in the past, it has been relaxed about the coupling. Now that the U.S. feels that China is catching up, it is also beginning to worry about the side effects of coupling. The United States is generally worried that China will use the coupling to take advantage of it, expand its trade deficit, technically overtake it through improper means and even abuse the open nature of American society to exert an ideological influence on the people.

According to the concept of “securitization” in international security theory, security does not objectively exist but is a conceptual construct. As concerns increase, nations will define more issues as security-related and put them on the security agenda. To achieve security, they will seek to reduce interdependence, set restrictions on communication, cut down communication and compromise its quality to reduce sensitivity and vulnerability in interdependence.

Americans may say this is related to the fact that the Chinese government has not allowed those two American companies to enter the Chinese market. But the facts are actually far more complicated than this. Ten years ago, Microsoft’s instant messaging software MSN Messenger was defeated by QQ in China. Today, Chinese people commonly use mobile phones to pay for goods when shopping; most Americans still use credit cards. Americans call cars through Uber; Chinese people are accustomed to applications such as Didi. Uber did business in China for a couple of years, but after the merger with Didi, the brand has disappeared.

Chinese people like to use shared bicycles and are proud of their high-speed railways linking major cities across the country. But in many parts of the world, the distribution of the population and the way of life make these technologies unserviceable. Some of my Western friends now complain that it is inconvenient to travel in China because they cannot order a taxi in Beijing. I urge them to use Didi, but they don’t have Chinese bank cards. So this type of problem is actually a kind of decoupling.

Therefore, although I personally think that decoupling is bad, it seems inevitable that China and the United States will be decoupled to some extent. China’s concerns about the United States have been found mostly in ideological and technological domains. In ideology, China is worried about its political security, so it has worked to make and enforce laws governing foreign NGOs. In technology, China hopes to have its own backups in core technology. Recently, after Huawei, ZTE and other companies were sanctioned by the U.S. government, the Chinese came to see this problem more clearly: If you can’t produce your own chips, the U.S. government can kill a key Chinese communications company at any time.

Concerns in the U.S. about China are mainly economic and ideological. Therefore, the Trump administration launched a tariff war and included Chinese companies in the list of entities, thus restricting technical exchanges between China and the United States and depriving Chinese students and scholars of visas.

The most fundamental way to address decoupling is, of course, to avoid excessive security awareness. This is probably difficult to achieve in the short term. So the question is probably how to limit decoupling and how China and the United States should act if they must be decoupled. If both countries are partially decoupled in a transparent and market-compliant way, and at the same time understand why the other side feels insecure and wants to promote decoupling, then things will not become too bad.

U.S.-China RivalryDecoupling
printTweet
You might also like
Back to Top
CHINA US Focus 2022 China-United States Exchange Foundation. All rights reserved.