It's Our Shared Success Story

The following are excerpts of Ambassador Cui Tiankai’s remarks on Jan 7 in New York during the Chinese Lunar New Year gala of the China General Chamber of Commerce USA. 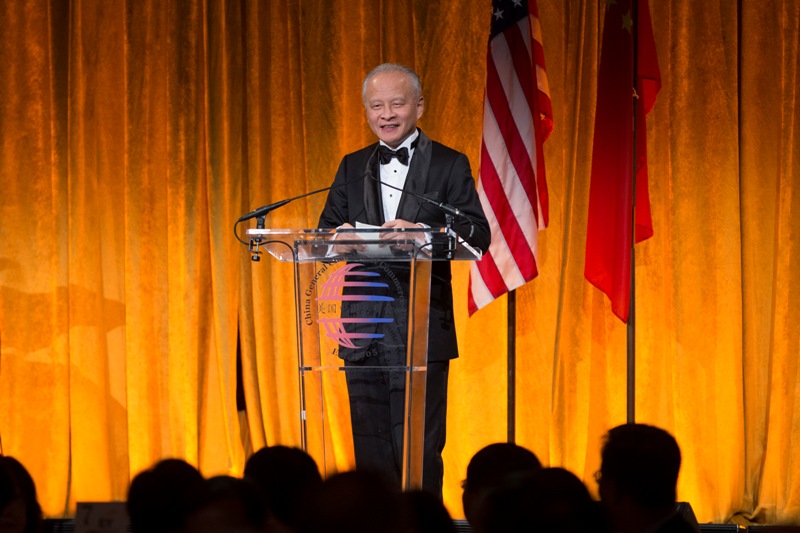 Forty years ago when China first launched reform and opening up, another important event took place almost at the same time, the establishment of diplomatic relations between China and the United States. It was no coincidence that these two historic events took place at the same time. And it was no coincidence either that those who have supported China's reform and opening up, people like Mr. Greenberg, have also contributed a great deal to the normalization and development of China-US relations. We all owe so much to these pioneers.

As we celebrating these two important anniversaries, let me remind you that later in the year we will be celebrating the 70th anniversary of the founding of the People's Republic of China. So as we celebrate all these important anniversaries, it is a good time for us to look forward to the coming decades and plan our work together for even greater success. Indeed, the choices we make today will help shape our common future.

For China, the choice is clear.

China will continue to seek people-centered development, sustainable development, and peaceful development. We will strive to meet the growing needs of our people for better life and achieve the realization of the Chinese dream. This is our goal. And this is also our inalienable right.

China will continue to work with the United States to build a strong and stable relationship between us. Reform and opening up in China and the normalization and development of China-US relations have benefited both countries and the entire world. This has been proven by the history of the last four decades. So the success story is not just China's. Nor is it just America's. It is our shared success story. It's the world's success story. People normally would question failures. But anyone with good common sense would never question their own successes.

History has told us that for China and the United States, cooperation benefits both countries, confrontation hurts both. Therefore, cooperation is the only right option for us.

Of course, profound changes have taken place in both countries and in the world. The world and our two countries are not the same as forty years ago. Our relations have to evolve with the time. But all this only underscores the need for closer China-US cooperation and the consequences if we fail to do so in this fast changing world. Let me reiterate here that China remains committed to expanding our cooperation with the United States on the basis of mutual benefit, managing our differences on the basis of mutual respect, and developing a relationship with the United States based on closer coordination, more cooperation and greater stability.

In this context, I would like to offer a few words to the business communities of both countries.

My first suggestion is: keep the big picture in mind. The growing aspirations of our peoples for better life, the continued advancement of technology and the rise of more developing countries on the global stage, whether they are from Asia, Africa or Latin America-these are the historical trends that are transforming our world in a most profound way. These are also the historical trends that are opening up enormous opportunities for business all over the world. To go with these trends certainly serves the interests of our peoples and our countries. But it will also enable business community to make best use of the new opportunities for your own growth and rise with the historical tide.

My second suggestion is: remain open. There are now in some quarters of the world attempts to close the door to others and cut off ties with others. These represent a narrow-minded and shortsighted world outlook. The reality is that if people try to close the door, they're not just shutting others out, they're actually shutting themselves in. No one can have greater access to others if they themselves are raising barriers.

Now let me say a couple of words to the Chinese companies here today. I'm fully aware of the situation now you sometimes have to face when doors are closed on you. I fully share your concerns and your opposition to these attempts. But my advice is: never give up, never give in. The best response to such attempts is greater openness. Have confidence in openness. Have confidence in your pursuit for win-win cooperation. And for the Chinese companies, this kind of openness also means the readiness to learn, to learn from your American partners, not only in terms of technology and management skills, but also more importantly, their capacity for imagination and culture for innovation.

My third suggestion to business communities of both countries is: have a clear stand on what's right and what's wrong. In order to succeed in today's world, people have to understand the interactions between politics and economics. But please never allow yourselves to be misguided by some narrowly defined "political correctness". Be clear about what you really want. Don't have the illusion that some self-claimed strategists who are actually new cold warriors can solve your problems for you. A free ride on their wagon will not take you to the right destination. Have the moral courage to say no to those advocating disrupting of international supply chain, fragmentation of the global market, decoupling of our two economies, zero-sum confrontation, and even a new cold war.

Over a hundred years ago in the late nineteenth century and early twentieth century, when Japan was going through its industrialization, there was a very prominent Japanese business leader with the name Shibusawa Eiichi. He put forward some ideas about the relation between the abacus, the traditional Chinese calculating gadget, and the teachings of Confucius. Mr. Eiichi believed that a good business person should have the abacus in one hand and the teachings of Confucius in the other. His point was to strike a balance between commercial profits and moral principles, between self-interests and public goods.

Of course, we're living in a very different world with even fiercer competition among countries. And super computers have long replaced the abacus in practice. But despite all these changes, and perhaps exactly because of all these changes, because today we're living in a world with greater capability and higher stakes, there is an even more urgent need to have a broad perspective and keep a long-term view. There is even a greater need to have a strong sense of justice and responsibility. And there is even a greater need for us to always keep in mind the real interests of our peoples. So perhaps the advice given by Mr. Eiichi is still somehow relevant. Perhaps this is something we can all think about as we start the new year.

Cui TiankaiU.S.-China Ties
printTweet
You might also like
Back to Top
CHINA US Focus 2023 China-United States Exchange Foundation. All rights reserved.