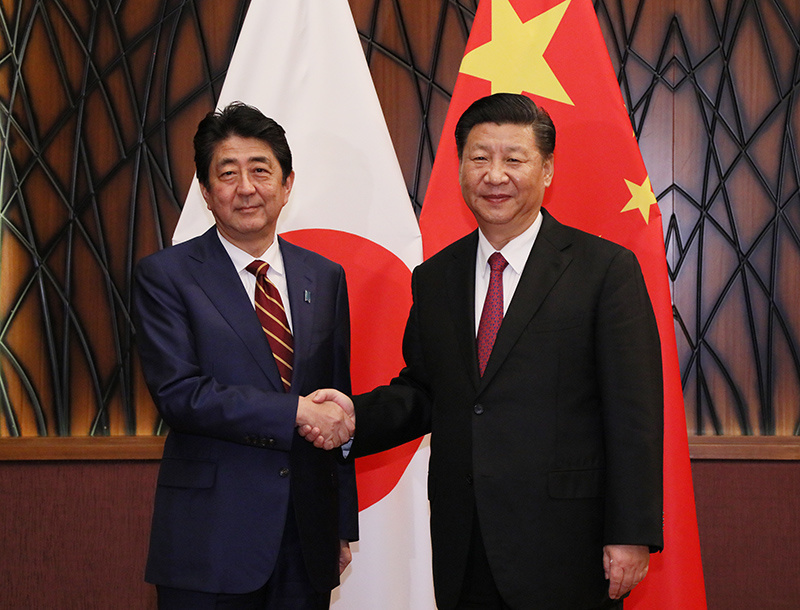 In East Asia and the Asia Pacific at large, relations between major countries, especially those between China, US, and Japan, have a significant bearing on regional peace, stability, and development. I would like to discuss some of the new changes in the trilateral relations, the development prospects, and in what direction the three countries should direct their efforts.

Since 2010, China-US-Japan relations have been unstable and imbalanced. But some important changes have taken place since 2017.

The marked improvement of China-Japan relations has been a positive change. Two crises over the Diaoyu Islands occurred in 2010 and 2012, after which relations between China and Japan went down to their lowest point since normalization of relations and were even to the brink of war. The two sides reached four points of principled agreement at the end of 2014. Then relations gradually improved and recovered, albeit very slowly. However, since 2017, bilateral relations have improved. Premier Li Keqiang paid a formal visit to Japan in last May, finally bringing China-Japan relations back to the normal track. The two countries are now preparing for the Japanese Prime Minister’s visit to China in October. A series of proposals will be put in the leaders’ agenda. This positive change has been welcomed by the international community.

On the other hand, there is also a negative change, i.e. worsening China-US relations. As a matter of fact, friction between the two countries has been increasing since 2010 when the US adopted the strategy to rebalance to the Asia Pacific with increased vigilance and counterbalances against China. Yet bilateral relations remained stable on the whole until last autumn. Nonetheless, since the end of 2017, the US has published three strategic reports, identifying China as its ‘principal rival’ and calling it ‘revisionist’ and representing material readjustment to its China policies. Multiple acts related to Taiwan were adopted by the US Congress, severely challenging the One China principle. In spring 2018, the US waged a trade war against China, souring the atmosphere of bilateral relations and creating greater difficulties for their development.

In the past two years, some subtle changes have also taken place in US-Japan relations. The alliance was strengthened from 2010 to 2016 to deal with the rapid growth of Chinese power. However, since taking office in early 2017, President Donald Trump vigorously advanced ‘America first’, unilateralism and counter-globalization trade policies. His various policy statements on both domestic and foreign affairs caused great concern in Japan. After US withdrawal, Japan took the lead of pursuing TPP11. It resisted US tariff increases on Japanese products. It insisted that the Paris Climate Change Agreement and the Joint Comprehensive Plan of Action with Iran, from which the US had withdrawn, remained valid. Although the Abe government has made efforts to maintain its alliance with the US, differences between the two countries have surfaced.

I think the imbalances in trilateral relations will continue for a fairly long time.

China-US-Japan relations in the 1970s and 1980s were balanced, stable, and cooperative on the whole. However, as the balance of power between China and Japan and between China and US go through major changes, relations have both moved into a stage of frequent friction. It will take a fairly long time for the three countries to get used to these changes. In the future, only if both the US and Japan accept China’s peaceful rise and China persists on the path of peaceful development will China-US-Japan relations return to the way they were in the 70s and 80s.

However, for some time more, continued imbalances will not mean that there will be no change at all in trilateral relations. The will depend primarily on China-US relations.

In the near and medium terms, when friction and competition markedly increases, China and the US may avoid conflict, confrontation or all-out deterioration in their relations if they are able to work together to strengthen competition and crisis management and control and persist in necessary dialogue and cooperation. Such a development will help create conditions for the two countries to gradually move out of the security dilemma. However, if China-US relations seriously deteriorate and cut-throat competition emerges, the two may well find themselves in a cold war state. In that situation, as an ally of the US, Japan’s effort to continue improving and developing relations with China will be seriously obstructed and trilateral relations will suffer more severe imbalances.

In the 1970s, after initial improvement of relations between China and the US, the rapid growth of China-Japan relations from resumption of diplomatic ties and the conclusion of peace and friendship treaty greatly facilitated the establishment and development of diplomatic relations between China and the US. After the political disturbances in 1989, the US led Western countries in comprehensive sanctions against China. By comparison, although it played a part in the sanctions, Japan explicitly opposed isolating China and the Japanese Prime Minister took the lead in visiting China and lifting economic sanctions. The Japanese position was instrumental to China’s success in breaking comprehensive Western sanctions. In the new situation, common interests between China and Japan are increasing. If China-Japan relations, which are already on the track of normal development, continue growing, China’s relations with the US may also improve.

It is now time for China and Japan to jointly clarify their relations. The two sides should stick to the political foundation established in the four points of agreement, adhere to the principle of seeking common ground while shelving differences and strive to move out of this period of frequent friction. If and when the China-Japan relationship is on the track of sound and stable development, it will have a positive influence on China-US relations.

China-U.S.-Japan Relations
printTweet
You might also like
Back to Top
CHINA US Focus 2022 China-United States Exchange Foundation. All rights reserved.