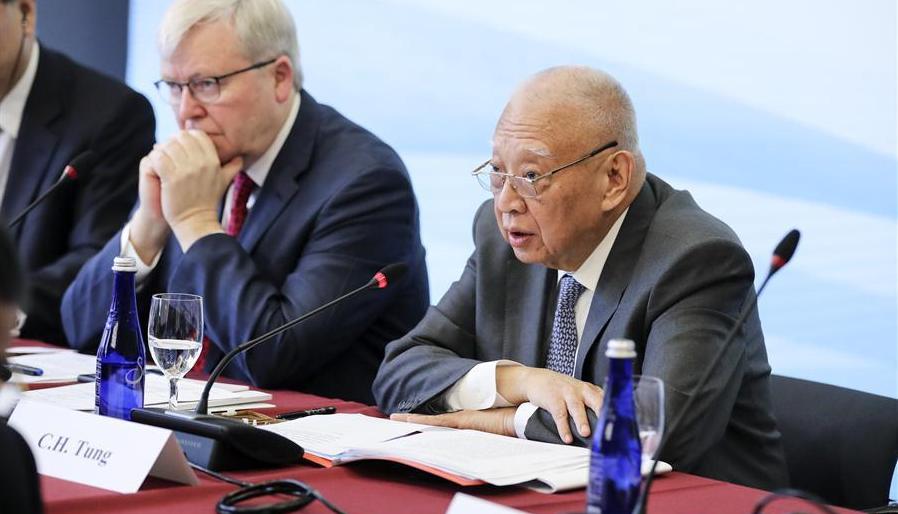 Tung Chee-hwa (R), vice chairman of the National Committee of the Chinese People's Political Consultative Conference, or China's top political advisory body, delivers a speech at the High-level Dialogue on U.S.-China Economic Relations in New York, the United States, on June 14, 2017. More than 30 scholars from leading think-tanks in both China and the United States gathered here on Wednesday to discuss the bilateral economic and trade relationship between the world's two largest economies. (Xinhua/Wang Ying)

The modern day US-China relationship began with President Richard Nixon’s visit to Chairman Mao Zedong in Beijing in 1972. Since then, nine presidents of the United States, and five leaders of China have worked to strengthen this relationship, knowing well that a good relationship between the two countries is not only good for the US and China, but also the world at large.  Today, we can all take heart in the successful summit meeting between President Trump and President Xi this April in Florida. Although much work still needs to be done, it was a positive beginning. This is a good omen that the relationship under their watch can move forward constructively.

Looking back into history, the modern US-China relationship that was initiated in 1972 by President Nixon and Chairman Mao Zedong, was anchored by the common objective against the Soviet Union’s hegemonic aspirations. By the time of the fall of the Berlin Wall, this was no longer relevant. Since then, the US-China relationship has very much been anchored on an interdependent economic relationship. As China’s nation building progressed, trade in goods and services between the two countries began to grow. Investment from the US to China has always been a feature of this relationship, but now, Chinese investment into the United States is also becoming an important factor for both countries. At the same time, people to people exchanges between the two nations have grown. In particular, the large numbers of students and tourists from China to the United States have not only helped both peoples understand each other better, but also played a meaningful contribution to the US economy.

The first major example was in 2008 when the US and China were faced with enormous challenges as a result of global financial crisis. US economy was declining rapidly and Chinese economy was badly affected.  Global economy was in tail spin. To confront this President Bush called for G20 Meeting in the United States. The United States prepared for a massive stimulus of $700 billion and asked China to respond in a significant way. China responded quickly. This was the first time the two countries worked together financially in global common good. These actions prevented a global meltdown.

Climate change is another good example. To start with, it was a US initiative which led to a determined joint effort between the US and China. This joint effort eventually led to the Paris climate change accord, an agreement which will stand as one of the most positive and consequential global agreements in recent history. I know that the US has wavered on how to move forward. But I can only emphasize that it is very important that the US not only stays in the agreement, but continues to be in the lead.

There has been press speculation that China is delighted in the US withdrawal from this agreement because China will then become the undisputed leader. This cannot be further from the truth. The Paris accord is a serious effort to reduce the threat of climate change. It is an effort that involves almost every nation in the world. Throughout these efforts, the involvement of the US and China was crucial. America’s absence in the future will be very badly missed, and will set back the global effort significantly.

So much on climate change. Another example of collaboration by the two countries, was in 2016 when the US and China collaborated in West Africa to confront the Ebola disease outbreak. As a result of the efforts of the two countries, we were able to successfully overcome the disease before further damage was done.

Lastly, but most importantly, the other effort that the two countries are collaborating on very closely, is to create an environment to ensure there is a nuclear free and peaceful Korean peninsula. The difficulty of this effort is enormous. Without the US and China working together on this, the situation will be dire. With the two countries working together, it is still difficult, but at least it will give us some hope.

Today, the fact is that the world is faced with many other challenges that need urgent attention. These include building a nuclear free world, preventing the militarization of outer space, managing cyberspace and enhancing cyber security, saving our seas from over-fishing, acidification and the build-up of rubbish, combating terrorism and managing global hot spots, and etc. No single country, can address these challenges alone. A multilateral approach will be necessary, and the involvement of the big powers is crucial. But initiatives agreed to between the US and China from the very beginning, can help the eventual success of our common efforts. I believe that contributing to global common good is a noble and good cause for the two countries to take on. But for the US and China to work closely together on many of the above challenges, the two countries need to understand each other a great deal more. Generally, what are our strategic intents? What are our economic and social development objectives? What are our challenges and worries? In other words, what are the things good friends know about each other. For each of the above challenges that we may be working on together, we need to be very open about each other’s motives and purposes, and share information more openly. Above all, we need to bear in mind that the ultimate purpose of working together is for a better world and for a better relationship between our two countries.

The general level of understanding has improved in recent years, but it is not enough. For Americans to understand China more, I would like to take this opportunity to talk to you about China. Many people are unaware of China’s recent past. Therefore, I shall begin to address this issue with the date October 1st, 1949.  This is the date when the People’s Republic of China was formally established. At that time, the country had just emerged from many years of civil war, and war of resistance against Japan. The country was devastated by war, exhausted, and basically bankrupt. Life expectancy of the Chinese people was only 35 years, infant mortality rate was as high as 20%, and the illiteracy rate was 80%.  There was little provision for education and practically no provision for medical care and social services.  Infrastructure was non-existent. The people suffered extreme misery and hardship. But what still remained was the spirit of the Chinese people, and this date, October 1st, 1949 marked the beginning of the rebirth of the nation.

Sixty-eight years onward, where are we today? China today is the second largest economy in the world. Six hundred million people have been lifted out of poverty. Essential infrastructure has been built. Education, healthcare and other forms of social services are provided for. Life expectancy is now 76 years, the infant mortality rate is 9%, and the illiteracy rate is 4%. What’s more, a closed Chinese society has become open. Indeed, there has been an unprecedented expansion of individual freedoms. The government has firmly committed itself to the building of a just society governed by the rule of law, and the protection of human rights. Never in the history of mankind has such progress been made in such a short period of time.

So where does China go from here? With a population of 1.4 billion people, and GDP per capita of $8,000, she is still a developing nation. Therefore, China will continue to work hard in nation building, and eventually join the ranks of developed nations. And this will take many years.

You may ask, internationally, what is China’s strategic intent? China wishes to pursue peace and shared prosperity with all nations around the world, particularly with her neighbors. China has no hegemonic or ideological ambitions. China does not wish to impose her system or values to other nations. The truth is that hegemonic aggression is not in the DNA of the Chinese people. At the height of the Ming Dynasty, when China had 30% of the world’s GDP, and a fleet of ships cruising back and forth along the maritime Silk Road, China never exhibited aggressive intent to colonize or occupy territories. To the Chinese people, peace stands above all.

China’s military expansion is only for national defense purposes. The fact is, her military expenditure, at a level below 2% of GDP, is comparatively low by any standard.  China recognizes that in order to pursue peace, she needs to construct a credible deterrent to prevent war against her by others. And this is what China is doing.

With this world view, China places great emphasis on seeking to build a constructive relationship with all nations. But a good relationship with the United States is particularly important. But this is not easy. After all, the people of the United States and China have different cultures, different histories, and the two countries are at different stages of development, therefore, our needs are different. At this stage it is even more important for us to understand each other better, and to trust each other’s goodwill and intentions more. Indeed every time we are able to overcome a global challenge together as stated in the above should help us to move the US-China relationship closer. On this foundation, a constructive relationship will always be possible. Too much is at stake for the Chinese and American people, and for that matter, for the world at large.

China-US RelationsChina Development
printTweet
You might also like
Back to Top
CHINA US Focus 2018 China-United States Exchange Foundation. All rights reserved. Disclaimer