The Asia Society and University of California, San Diego, under the co-chairmanship of Orville Schell and Susan Shirk, published a task force report on “US Policy Toward China: Recommendations for a New Administration.” Schell is head of the Center on US-China Relations at Asia Society and Shirk is head of School of Global Policy and Strategy at UCSD. 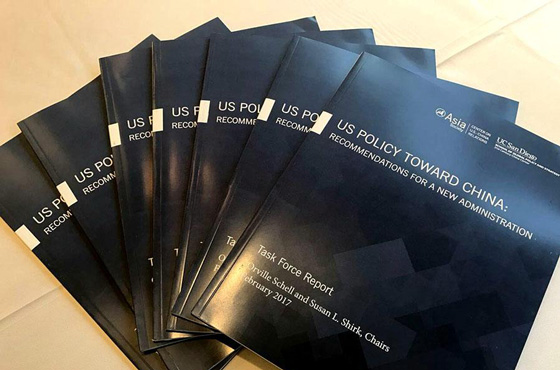 Roughly two years in the making, the point of this report in light of the timing — published in February 2017 — is to serve as a guide for the Trump administration. Near the beginning of the Executive Summary is the statement that reads: “It is in the national interest of the United States to strive, if possible, for stable and mutually beneficial relations with China, and to maintain an active presence in the Asia-Pacific region.”

As they read this report, the China-bashing hawks within the administration won’t necessarily see any need to strive for “mutually beneficial relations with China.” Moderates in and out of the White House, on the other hand, may find the generally unfriendly (toward China) tone of the report surprising.

Aside from the two co-chairs, there are 12 members identified as “task force” co-authors. Many in this group are known not to hold warm and fuzzy feelings for China, at least not for the Beijing regime. This is clearly in contrast with the six task-force participants that declined to sign on as co-authors of the report. The group of six non-signatories is, in my opinion, among the faction of more empathetic China observers.

The Task Force Report identified six priority issues that the Trump Administration must deal with immediately while other issues can wait. Since I have just published my recommendation that President Trump has no choice but to collaborate with China, I would like to review the six issues in line with my published views.

Dr. William Perry, former US Secretary of Defense, recounted in his memoir that by the end of the Clinton administration, the U.S. under his leadership was on the verge of reaching an agreement with North Korea. The provisions would have included Pyongyang agreeing to stop its nuclear program before getting the bomb.

Then the incoming Bush administration elected to ignore North Korea for two years, and when contact resumed, the White House added new demands on Pyongyang. By then, Pyongyang had enough time to complete development to test nuclear weapons and thus became a bona fide member of the nuclear club. Once becoming an owner of “the bomb,” negotiations between the U.S. and North Korea became even more difficult.

Trying to be helpful, Beijing organized six-party talks to see if additional participants, namely China, Japan, Russia, and South Korea, could help break the deadlock. The six-party talks did not, but Washington can now conveniently blame China as the owner of the nuclear North Korea problem. Actually, as I have pointed out in an earlier article, so long as China sits across the table from the U.S. and South Korea, China’s hands are tied – the interests of the three states are not aligned. China needs North Korea as a buffer state and could not justify applying excessive pressure. Putting the survival of the Pyongyang regime in jeopardy would be against China’s national interest.

Recently, before her impeachment, South Korea’s President Park had agreed to allow the U.S. to install Terminal High Altitude Area Defense (THAAD) inside South Korea. Since the THAAD missile-defense system is effective against long range, high trajectory missiles, installing the system in South Korea would allow missiles heading for Seattle or Los Angeles to be intercepted, but wouldn’t do much to protect Seoul across the border from low-trajectory, short-range missiles. Park’s muddle-headed decision put her relations with Beijing in the deep freeze, and of course has not encouraged Beijing to want to work with the U.S.-South Korea coalition.

By “commitment to Asia” the authors mean for the U.S. to continue the role as the world’s hegemon. Someday, the Trump Administration may conclude that the benefits of “reaffirmation” (another word for Obama’s American exceptionalism) cannot justify the cost.

Deploy Effective Tools to Address the Lack of Reciprocity in U.S. Trade and Investment Relations with China.

“The benefits to the US economy from US-China trade and investment are substantial, but rising protectionism in China and job losses in the United States—some of which are attributable to trade with China—are undermining public support for the broader relationship.” In the early days of the bilateral relationship, China provided all sorts of incentives and tax breaks to entice American companies to invest in China. Now that China has become an economic peer relative to developing countries, they are taking away the incentives. I suspect some of the feeling of “lack of reciprocity” is caused by foreign companies having to compete with local companies, now without the benefit of subsidies.

The feeling of American companies is likely in part due to missing the incentive packages of the “good ol’ days” but certainly provides grounds for negotiation. The American Chamber and the National Business Council are quite capable of taking the lead in discussing fairness of American companies in China. We all know everything in China is negotiable.

There is no direct linkage between trade with China and loss of jobs in the U.S. The Trump Administration should instead focus on how to generate a continuing supply of qualified workers that would meet the needs of plants in the U.S. driven by high technology such as automation and artificial intelligence. Chinese companies are also looking for skilled workers in the plants that they wish to locate in the U.S. That’s where the employment gap is at and that’s where new jobs will be created.

Intensify Efforts to Encourage a Principled, Rules-based Approach to the Management and Settlement of Asia-Pacific Maritime Disputes.

Ironically, the U.S. has been the greatest cause of tension in the South China and East China Seas. To calm the waters, the Trump Administration should remove the irritant of constant surveillance by American naval ships and planes off China’s coast. Malaysia, Philippines and Vietnam have all shown that they are capable of settling their disputes with China amicably without Uncle Sam in the room.

As for the East China dispute, it’s time the White House recognizes that the U.S. deliberately sown the seeds of discord when Washington handed administrative control of Senkaku (Diaoyu in Chinese) to Tokyo in 1971. Until that point, there was no basis that those East China islands belong to anyone else other than Beijing or Taipei. If there was to be a dispute, it should have been between the two parts of China.

Bill Gates famously said when operating in another country, you would expect to abide by the rules and regulations of that country. It certainly would be the height of arrogance to expect every country to abide by American rules because America is exceptional. That said, I do believe unfettered exchange between the people of the two countries would greatly benefit both countries—so long, of course, as the exchanges take place without hidden malice and pernicious intentions. Exchanges should promote mutual understanding and trust while culturally enriching each other.

The report further claims that the current situation “allows China to exert an inequitable influence over U.S. public opinion through an unfettered flow of its propaganda.” The Trump Administration should continue to allow, nay encourage, the Chinese to exert its influence. Judging from the flow of negative portrayal of everything related to China that dominates the American media, China has been doing a terrible job, and this matter should be the least of Trump’s worries.

This is an excellent recommendation. The world’s perception is that China has already assumed the leadership on dealing with climate change. For the U.S. to regain its place, certain members of the Trump Administration need to first take a tutorial on basic scientific truths. They need to accept that the world is not 6,000 years old and evolution as posited by Darwin is not some Marxist-Leninist propaganda. Then they should think about the kind of legacy they want to leave for the future generations.