Japan’s online shopping company Rakuten issued a statement on February 28, begging Chinese consumers not to confuse its brand name with Lotte, a South Korean company mired in the depths of a diplomatic row with China (the two names are spelled in exactly the same Chinese characters). 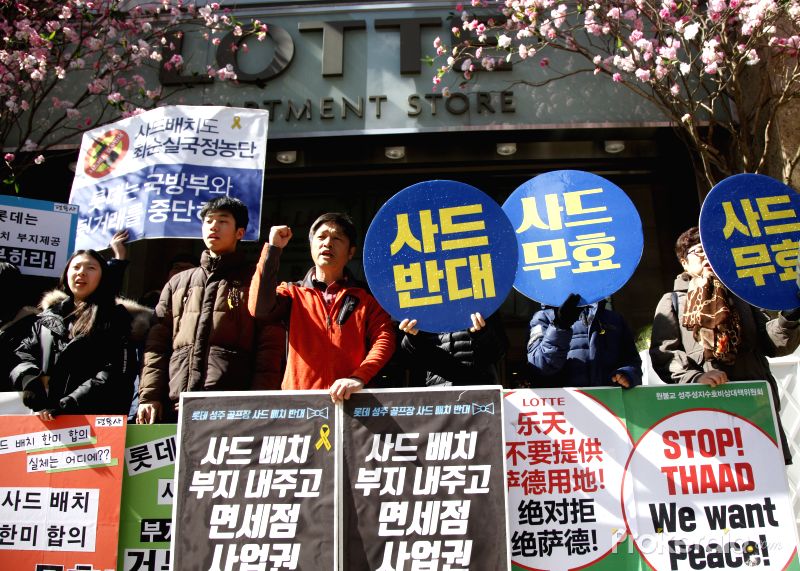 Protesters hold posters during an anti-THAAD rally in front of the Lotte department store in Seoul, South Korea, Feb. 23, 2017.

Some people may find this statement hilarious and the Japanese over-jittery, yet it is far from a laughing matter. China lashed out at South Korea’s Lotte Group after the company’s board approved a land-swap deal with the South Korean government. The land in question will be used to deploy a U.S. missile defense system, with radar believed to be capable of penetrating Chinese territory.

China’s state media said in commentaries that the Chinese consumers have every right to say no to companies like Lotte, which pander to government pressure in the name of “national security” at the price of other countries’ interests. The Chinese people, the commentaries went on, would not condone those foreign businesses that reap huge profits in China while trampling on Chinese people’s feelings. Put into this context, Rakuten’s seemingly overreaction is understandable and makes perfect business sense.

Economics and geopolitics are two most important realms where countries interact. Oftentimes they align with each other. Robust economic relations boost trust and cooperation in security alignments, and vice versa. Trans-Atlantic ties between the United States and its NATO allies in Europe fall into this category (or at least it was so in the pre-Trump era). Intertwined economic exchange across the Atlantic strengthens security bonding, and a consolidated security alliance further promotes closer economic activities.

Whereas these two realms positively reinforce each other in the Atlantic, they seem to be correlate negatively in East Asia. Too often we see the weird scenario of “hot economy versus cold politics” between China and Japan. In the absence of an Asia-wide security arrangement incorporating all key players in the region, keeping economics and geopolitics in separate dimensions is probably the best we can get for right now.

However, the Lotte incident demonstrates China’s latest attempt to employ economic means to achieve geopolitical ends. Though the state stopped short of an explicit call for an outright boycott of Lotte products, punitive actions, even if covert ones, might follow. From China’s perspective, its gigantic economic weight is powerful enough to subjugate its unwilling neighbor.

The response on China’s side comes as no surprise to readers even moderately familiar with East Asian news. This is a recurring incident and part of a broader pattern that gets replayed in the power dynamic between regional nations. Yet such a reaction is by no measures a judicious one, even if we take into consideration China’s interests alone.

To start with, using economic means for geopolitical ends rarely achieves projected goals. Economic cards hold little leverage over security issues in that security concerns override everything else as they speak directly to a nation’s survival instinct. More often than not, playing economic cards not only fails to secure geopolitical wins, but also hurts one’s own economic positions.

The 2012 anti-Japanese protests in China offer a perfect example here. After the Japanese government announced it would buy part of the Diaoyu/Senkaku islands to stall a similar move offered by the Tokyo government, protests and demonstrations against Japan swept across major cities in China. The protests deteriorated into violent actions targeting Japanese companies, with angry people damaging, looting and destroying shops, cars or anything they associated with Japan. Furthermore, Chinese authorities ordered travel agencies to suspend Japan tours.

Ironically, fickle consumers are so forgetful that they switch loyalty in no time. The very people who were protesting against Japanese products (most of them are actually made in Chinese factories by Chinese workers) in 2012 became the backbone of a shopping spree in Japan several years later. Millions of Chinese tourists bought their way into major Japanese cities, purchasing everything “Made in Japan”, from toilet seat covers to rice cookers, from OTC medicine to baby formula.

And the result? Diaoyu/Senkaku islands remain under Japan’s administrative control, and the mutual animosity further deepens between Chinese and Japanese people. On top of that, a more disturbing trend has set in. Ever since the 2012 protests, Japanese businesses have started diverting investment from China to Southeastern Asian countries. In 2015, foreign direct investment from Japan to the 10-member ASEAN exceeded that to China and Hong Kong for the third consecutive year. And the pace has been accelerating. Within a five-year span by 2015, investment to ASEAN almost tripled. On the other hand, Japanese investment to China dropped over 25 percent in 2015, also for the third straight year. Though other factors like greater growth potential and lower labor costs in ASEAN countries contribute to this trend as well, volatile relations between China and Japan have apparently weighed heavily on businessmen’s calculus and damped their long-term enthusiasm for China.

Moreover, brandishing economic weapons is likely to invite similar countermeasures from other countries. In 2014, China set up an oil rig in the disputed areas of South China Sea, triggering widespread anti-Chinese protests in Vietnam. Protesters damaged and destroyed hundreds of factories, incurring losses in millions of dollars.

In addition, punishing foreign businesses and establishing trade barriers run counter to international trade rules. In retaliation for Japan’s detention of a Chinese trawler captain near Diaoyu/Senkaku in 2010, China banned rare earths exports to Japan. The United States, backed by Japan and EU, filed a lawsuit with WTO in 2012, which ruled against China in 2014 and made it drop the export quotas in 2015. Such actions tarnish China’s image as a reliable business partner, an investment-friendly market, and a responsible global player, and is prone to provoking trade disputes and retaliatory measures.

From South Korea’s perspective, Lotte is obviously the one taking the hardest hit. Unlike Japanese counterparts who have long been hedging against political volatilities ever since the Diaoyu/Senkaku incident, South Korean businesses have huge exposures to Chinese markets. Caught off guard by the THAAD issue as it first emerged last year, Lotte Mart in China reported over $88 million in operating losses in 2016 alone and is said to be closing three retail stores near Beijing soon. South Korea, the country as a whole, might fall victim as well. China is South Korea’s top exporting destination in 2015, with exports valued at almost double those of the United States (South Korea’s second largest exporting market), and over five times those of Japan. China is also South Korea’s largest importing origin, with values double those of Japan, the country’s second-largest importing country. Should any Chinese punitive action materialize, South Korea, a foreign trade-driven economy, is expected to sustain enormous losses.

Even the United States, a seemingly supporting player in this bilateral act, stands to lose. It is simply not in America’s own interests to see its regional ally hurt economically and humiliated diplomatically. If such a pattern repeats itself in the future, America’s allies would have to make the hard choice of picking sides between the U.S. and China, a scenario Washington would rather not see. More significantly, angering China affects in a direct way America’s long-term security prospects in the region. Deploying THAAD was meant to deter a North Korea running amok, but if this very move antagonizes China, America’s most influential partner in containing Pyongyang, it would hurt, rather than help, Washington in achieving its strategic goals. After all, China is not Iran or Russia, with which America shares no significant economic ties, and thus sanctions against those regimes are effective enough to bring them to their feet. Both the United States and its regional allies enjoy profound economic interactions with Beijing. Souring this relationship cuts both ways, and cuts deeply.

Then how to cope with this situation? For China, it should understand that economic leverage would never be translated into geopolitical victory automatically. If used unwisely, it accomplishes nothing but makes things worse. It is imperative for the government to prevent geopolitical risks from spilling over into economic realms, and refrain from punishing foreign business community, the only bright spot in Sino-Korean and Sino-Japanese relations, for something not of its own making.

For South Korea and the United States, they should put forward concrete measures, not just lip service, to assure Beijing that THAAD is not meant to target China. The United States, in particular, needs to think beyond its traditional “hub and spokes” security framework, and try to bring on board China in future security considerations. Even if the two great powers share little in common values, combatting common threats posed by a berserk North Korea in and of itself constitutes a good enough reason for cooperation.

China-South Korea RelationsTHAADKorean Peninsula
printTweet
You might also like
Back to Top
CHINA US Focus 2018 China-United States Exchange Foundation. All rights reserved. Disclaimer