The Trump Administration Needs a Trade Deal More than China 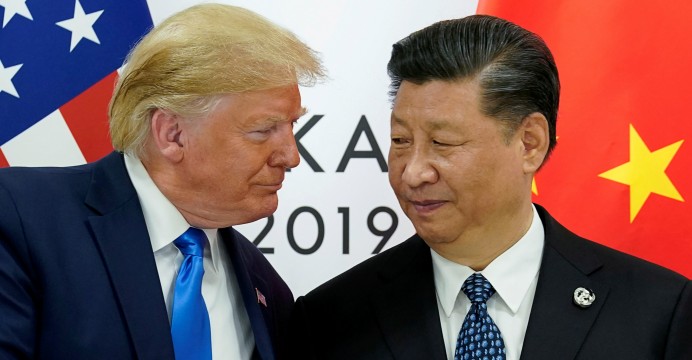 With the December 15th date for a new round of U.S. tariffs looming, trade negotiations between the Trump administration and Chinese government are being eyed warily by investors on both sides of the Pacific. Some in the U.S., including President Trump himself, suggest that China needs a deal more than the States due to the recent deterioration of its export economy. However, domestic political pressures mean that the Trump administration desperately needs to conclude a deal in the short term. The administration is nervously eyeing troublesome economic indicators, hoping to postpone a reckoning until after the 2020 elections. With U.S. stock markets bubbling to all-time highs – in no small part thanks to optimism over a potential deal – the administration needs to sign a concrete agreement in order to avoid a painful crash that could drag down the wider economy.

Recent months have seen a wave of rumors and pronouncements about the possibility of a ‘Phase 1’ deal that could usher in a détente in the U.S.-China trade war. The outlines of such a deal have been murky, but they include Chinese pledges to radically increase purchases of U.S. agricultural exports and American offers to cancel further tariffs. Both China and the Trump administration have played fast and loose with the heartstrings of many an economic observer – the Pavlovian bell of an “imminent deal” one week is followed by the cold water of Trumpian saber rattling the next. It currently appears that the U.S. and China are still involved in meaningful negotiations, though both parties only remain willing to sign a deal on their terms. All eyes, however, are on December 15th: the U.S. deadline to impose an additional 15% tariff on $156 billion in Chinese goods.

Though pain has been felt on both sides, the balance of leverage appears uneven. China’s economic growth is likely lower than already-mediocre official statistics suggest. The export economy is suffering with factory orders slumping, and credit is not expanding despite stimulus from the People’s Bank. On the U.S. side, the agricultural sector is still suffering from being cut off from Chinese markets, in spite of the extension of government subsidies. However, mixed signals about the health of the U.S. economy are being papered over by decent debt-fueled consumer spending and a stock market bubble inflated by central bank easing at home and abroad. It would thus seem that the U.S. is better positioned than China for this month’s negotiations due to its relative economic strength.

But not all is as it might seem. Even as profits stagnate, American stock markets are in the midst of a bubble that continues to rise to all-time highs. These markets are highly-overvalued on a wide range of metrics. Much of this can be attributed to the effect of expansionary central bank policy and cheap credit, allowing U.S. corporations to buy back their own stock and other institutions to pile in behind inflated prices. Meanwhile, corporate debt has risen to record highs, foretelling a looming reckoning if earnings decline further. Bubbles of this nature are fragile and vulnerable to shocks, and that fragility increases as they continue to inflate, while the forces behind them lose momentum. And one of the most important psychological forces behind the present bubble is the misleading narrative, pushed by the Trump administration, that a Phase 1 trade deal is on its way, soon to be followed by an end to the trade war and the tariffs investors despise.

A small preview of what bursting this bubble of optimism might look like occurred on December 3rd. Trump hinted that a trade deal could be postponed until after the 2020 elections, and stock markets tumbled. It took little more than an off-the-cuff statement to produce a 400-point morning drop in the Dow Jones Industrial Average. The President later stated that the decline was insignificant, and that future declines would not influence him to cut a better deal with China. This is pure bluster. No other administration in U.S. history has had a laser-like focus on the stock market like that of the Trump White House.

In order to truly win, China needs to use the leverage it can muster to secure the pullback of all meaningful tariffs imposed since the beginning of the trade war. It can only do this by being willing to ride out the temporary pain imposed by those tariffs longer than its American counterparts. This is a ‘game’ with asymmetrical rules. The Chinese government, of course, still cares about public opinion – high unemployment means discontent, strikes, and riots, while falling growth hurts influential big business owners and property holders. However, the Chinese government does not need to worry about elections that will sweep it from power in the short term, while the Trump administration does.

Conventional wisdom suggests that the performance of the economy has a decent influence on presidential election results, and the Trump administration plans to campaign on U.S. economic strength in 2020. Market turmoil not only imperils the general U.S. economy and ordinary voters, it also tests the patience of ultra-wealthy Republican donors, who might prefer to quietly sit out the election in hopes that a successor will cut a deal with China. As we have just said, the U.S. economy is being propped up by a fragile stock market bubble that depends in part on optimism about an end to the trade war. The Chinese government can very simply, and unilaterally, test the strength of this bubble by leaking pessimistic updates about the negotiations. It can even state outright that it is breaking off negotiations, which would prove a serious shock.

In any case, the beginning of a U.S. stock market rout before the 2020 elections is what the Trump administration fears more than anything else. One need only look at how the Republican Party was savaged in the elections after the 2008 crash to understand why. China faces economic turmoil and worries of its own, but it does not realistically face the threat of losing power if it suffers a difficult 2020. In order to outmaneuver the Trump administration and help reestablish the trade regime it prefers, the Chinese government simply needs to ask itself who really needs to worry more about turbulence in 2020.

Donald TrumpTrade WarU.S.-China Rivalry
printTweet
You might also like
Back to Top
CHINA US Focus 2023 China-United States Exchange Foundation. All rights reserved.