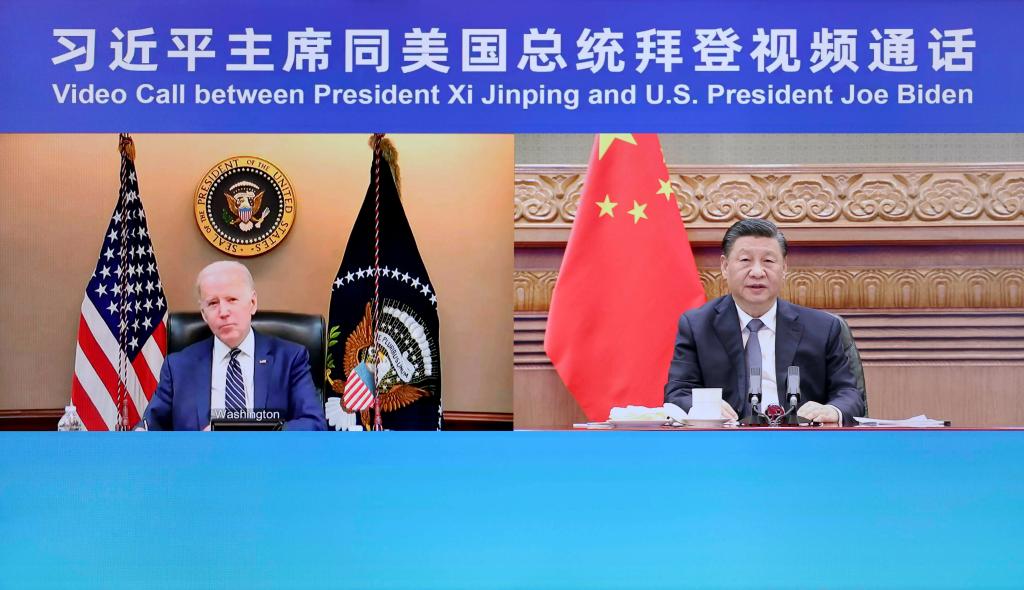 Chinese President Xi Jinping had a video call with U.S. President Joe Biden on March 18, 2022. The two sides are ready to make respective efforts for the proper settlement of the Ukraine crisis. (Xinhua/Liu Bin)

Against the backdrop of the continuing Russia-Ukraine conflict, President Xi Jinping met with U.S. President Joe Biden via video link in an effort to deepen strategic communication, even as significant differences remain on many issues. Xi made clear that China does not welcome the Ukraine crisis, saying the conflict is in no one's interest, that conflicts are not in the interest of anyone and that state-to-state relations should never advance to the stage of confrontation. On the issue of war and peace, China chooses peace and opposes war.

However, between Russia and Ukraine, which side is China going to choose? This is obviously a false question. China and Russia are neighbors; both are nuclear-armed powers; and the China-Russia comprehensive strategic partnership for a new era established by both sides has its own internal logic.

China has long been friendly with Ukraine, and the two countries established a strategic partnership back in 2011. Recently, Chinese Ambassador to Ukraine Fan Xianrong said during a meeting with senior Ukrainian officials in Lviv that, “Economically and politically, China will always be an important partner of Ukraine.” This is not straddling the fence, as some Americans and Europeans say, but is a result of China’s independent diplomatic principles and repeated weighing of its national interests.

The Russia-Ukraine conflict is a strategic surprise for China: It was not started by China and is not under its control. As Chinese Ambassador to the United States Qin Gang said in a Washington Post article, China had no prior knowledge of Russia’s military intent.

“Had China known about the imminent crisis, we would have tried our best to prevent it,” Qin wrote, because a conflict between Russia and Ukraine is of no benefit to China.

There is no doubt that the conflict has a complex history, with deep and longstanding animosity between Russia and Ukraine, as well as an ongoing escalation of the U.S.-NATO rivalry with Russia over national security interests. NATO is a product of the Cold War between the U.S. and the Soviet Union, and its nature as a military alliance is hard to deny. Former U.S. Secretary of State Henry Kissinger, veteran diplomat George Kennan and University of Chicago professor John Mearsheimer have all explicitly criticized NATO’s continued eastward expansion — disregarding Russia’s opposition — as a strategic mistake. They even predicted today’s vicious war.

In 2008, NATO declared that it welcomed the membership of Ukraine, but the process was not completed. In 2014, Ukraine’s president, Viktor Yanukovych, advocated non-alignment but stepped down and went into exile amid a “color revolution” in which the United States was deeply involved. The woman behind this change in Ukraine, U.S. Assistant Secretary of State Victoria Nuland, is now the undersecretary of state for political affairs in the Joe Biden administration and is well known for her hostility toward Putin’s regime.

Ukraine, as a sovereign state, naturally has the right to choose to join NATO. But Russia believes that the U.S. and NATO will deploy missiles in Ukraine and that they are interested in supporting Ukraine’s acquisition of nuclear weapons. Thus, from Vladimir Putin’s point of view, NATO’s closing in on Russia’s border looks like an imminent NATO invasion, and Russia has received no positive response to its diplomatic forays from Ukraine, the U.S. or NATO. This is geopolitical revenge.

Undoubtedly, Russia underestimated the difficulty of using force to solve problems. Wars are always easy to start but difficult to end. Russia’s international situation may be even more difficult.

Unfortunately, the Russia-Ukraine conflict is likely to escalate further and, as UN Secretary-General Antonio Guterres warned, could lead to nuclear war. Russia seems to vow to continue the fight and has made its nuclear power clear. It has also signaled that it will not shy away from escalation through the use of hypersonic missiles.

The United States and NATO have long been part of this war, providing Ukraine with high-quality intelligence and advanced equipment to carry out precise and critical military interventions. Recently, NATO countries, led by the United States, held joint military exercises with Finland, Sweden and other countries in Norway with more than 30,000 people.

Moreover, some U.S. and European figures hope to take advantage of Russia’s increasingly difficult situation by launching a fierce attack on Putin’s regime through the imposition of unprecedented economic, trade, financial and technological sanctions to force Russia into civil unrest and bring Putin down completely. Biden has openly referred to Putin as a “war criminal" and the U.S. is trying to shape the conflict as “Putin's war.” The U.S. attempt to counterattack and even promote regime change in Russia is very dangerous. If the Russians choose to further escalate the conflict, the possibility of extending the war to some NATO members cannot be ruled out.

None of this is in China’s interest, nor is it within China’s control. The Chinese are still unable to see the endgame that Russia, Ukraine and the United States want       in this conflict, and will not act blindly. In fact, China’s leverage, capabilities and resources available for a so-called mediating role are extremely limited. Ironically, the U.S. and European dignitaries are pushing China to take sides, demanding that it cut ties with Russia. But they also want China to mediate. That’s why Xi told Biden two old Chinese sayings: “It takes two to tango” and “He who tied the knot must untie it.”

China does need to make a cut — that is, to rationally and calmly sever the Russia-Ukraine conflict from both China-U.S. relations and from China-Russia relations. Biden emphasized that China will face “consequences” if it helps Russia. This is a very harsh statement for the Chinese leadership — tantamount to naked coercion — and does not facilitate communication and coordination between China and the United States.

In addition, the U.S. should not confuse the Russia-Ukraine conflict with the Taiwan question, as that will only narrow the diplomatic space for China-U.S. interaction. Xi reiterated to Biden during the video meeting that mishandling of the Taiwan question will have a subversive impact on the bilateral ties.

This Russia-Ukraine conflict will make China re-examine the Sino-Russian relationship, but never in the way that the United States would like. Undoubtedly, the growing closeness between China and Russia in recent years is not unrelated to the enormous pressure the two countries face from the United States. Many Chinese have a deep-rooted fear that if Russia falls, China’s situation will become even more dangerous and U.S. repression of China will become even more reckless.

How to understand “safe distance” between China and Russia, how to assess the strategic burden of the Russia-Ukraine conflict on China and how to prudently handle the four-party relationship — China, Russia, the United States and Europe — are all things China needs to ponder.

Historically, there is no shortage of cases in which the relationship between China and the U.S. has been revived by strategic surprises — for example, the benign interaction between the two after the Sept. 11 attacks in 2001. The impact of the Russia-Ukraine conflict is no less than that of Sept. 11. It is a new war that shocks the old order. The use of new types of weapons, information warfare, cognitive warfare and economic warfare are all in full swing.

The shadow of nuclear war and the staggering civilian casualties in Ukraine have made people see the danger and cost of war, and the voice of countries against the war is becoming ever louder. At the same time, however, we must see that the conflict is causing Germany, Japan and other countries to significantly adjust their defense policies as they seek to enhance their preemptive offensive capabilities. The Republic of Korea and other countries have raised their voices for self-protection by resort to nuclear weapons. Beyond all that, a global energy crisis, food crisis and financial turmoil are imminent.

That is why President Xi Jinping warned, “The prevailing trend of peace and development is facing serious challenges. The world is neither tranquil nor stable.” This is profound and should not be taken lightly.

At this juncture, China and the United States must assume a special and important responsibility to promote peace and stop war. They must find a proper response, with a view toward balancing morality and interest for both the long and short term. Diplomacy is never as simple as a one-choice question, and moral judgments often impede the search for practical diplomatic solutions.

The United States needs to abandon the myth of democratic peace, break its obsession with absolute security, restrain its impulse toward camp confrontation and stop using petty means — rumors, coercion and intimidation — to force people to choose sides in dealing with the big crises that affect the fate of humanity.

Ukraine CrisisChina-U.S.-Russia RelationsNATOChina-Europe RelationsGeopoliticsRegional Security
printTweet
You might also like
Back to Top
CHINA US Focus 2023 China-United States Exchange Foundation. All rights reserved.