The Unpredictable Triangle: U.S.-China-Russia Relations in the Trump Era

The election of Donald Trump as President of the United States at first seemed likely to rearrange the U.S.-Russia-China strategic triangle.  If you remember your geometry lessons, we now have an isosceles triangle—China occupies the pivotal position at the top and has better relations with both Russia and the United States than they have with each other.  Initially it appeared that the new Administration aimed to create a more balanced triangle or even one with the U.S. re-occupying the pivotal position. Trump’s apparent fascination with Russian President Vladimir Putin and interest in improving relations with Russia contrasted with his initial sharp rhetoric about China on trade and currency manipulation.  According to the triangular logic, which hearkens back to the days of the Nixon Administration’s diplomacy, if the U.S. improved relations with Russia relationship at a time when Sino-American tensions increased, this would enhance U.S. leverage in the triangle while deterring China from behavior that runs counter to U.S. interests and possibly even distance Moscow from Beijing.

Soon North Korean missile tests and controversy over the Trump Administration’s connections to Russia would upend this picture.  Surprisingly, U.S.-China-Russia relations have returned largely to where they were during the Obama Administration.  China’s President Xi Jinping managed to charm Trump at the Mar-a-Lago summit in April and convince him that a good relationship with China was essential to deterring North Korea. Although the talks there were reportedly contentious and partially upstaged by Trump’s revelation during dessert at the state dinner that he had retaliated against Syria’s use of chemical weapons with an airstrike, Xi left Florida with a commitment from the Trump Administration to negotiate a 100-day trade plan and was rewarded by U.S. attendance at the Belt and Road Initiative forum last week.  Moreover, in an effort to encourage China to do more to restrain North Korea, the U.S. President has put aside promised assertive measures in the South China Sea, such as freedom of navigation operations, and, despite campaign rhetoric accusing China of being a currency manipulator, refrained from condemning China as such. 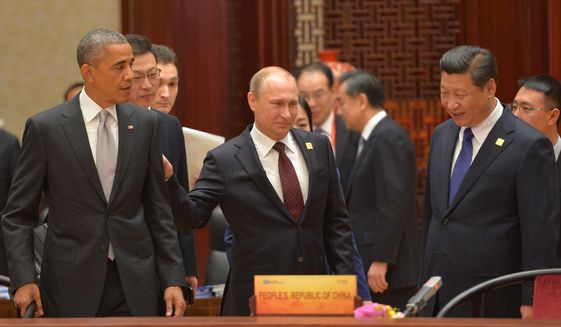 Meanwhile, lukewarm support for Ukraine and apparent disinterest in the Trump Administration in human rights seemed poised to narrow areas of disagreement between the U.S. and Russia.  This time anti-government protests in Russia could not be blamed on U.S. machinations. At the same time, any major improvement in U.S.-Russia relations has become nearly impossible due to the deepening scandal surrounding the Trump campaign’s dealings with Russian officials. Although some limited progress has been made—Moscow appears to have had second thoughts about ending a hotline intended to avoid U.S.-Russian military clashes in Syria—there is no indication (or possibility) of any major reorientation of U.S.-Russia relations at present.

While the strategic triangle has not shifted markedly, for Russia and China, the new political landscape in Washington is fraught with peril— President Trump has proven to be more unpredictable in some ways, though an easy mark in others.  In part, the lack of coherence on foreign policy in the Trump Administration can be attributed to staffing problems—many key State Department positions remain unfilled.  Secretary of State Rex Tillerson takes a decidedly backstage role compared to the National Security Advisor and the Secretary of Defense and there is no sense of a foreign policy strategy towards Asia— or anywhere else. Towards North Korea, strategic patience has been replaced by tactical impatience and a series of bumbling moves, exampled by the misplacing of the U.S.S. Carl Vinson, that have heightened fears of conflict breaking out on the Korean peninsula out of miscalculation.

Both Putin and Xi have realized that flattery will get them everywhere with the new American leader, often leading him astray. President Trump has been accused of revealing Israeli tradecraft in a conversation on an ISIS plot with the Russian Foreign Minister and criticized for allowing Russian media to cover the event, but barring the American press.  After a conversation with President Xi, Trump appears to have come away believing that Korea was once a part of China—a claim that infuriated South Koreans—and seems to have fallen into the same trap as the Bush Administration in outsourcing the North Korean problem to the Chinese, who remain unwilling and/or unable to contain their unpredictable ally.

Even if the U.S.-China-Russia triangle may not have shifted as predicted a few months ago, there is remarkable fluidity in the international relations in Asia.  New leaders in South Korea, the Philippines, and Taiwan have reshuffled the deck and Trump’s unexpected actions have heightened uncertainties.

Before taking office, on December 2nd 2016 Trump accepted a phone call from Taiwan’s President Tsai Ing-wen and appeared to call into question the longstanding U.S. one-China policy without much forethought.  The Trump Administration’s apparent interest in bartering this commitment for trade concessions from Beijing alarmed Taipei, despite the excitement there over the phone call.

Before Trump’s election, President Rodrigo Duterte sought to improve relations with China and put aside the territorial dispute in the South China Sea.  Duterte also reached out to Russia—which has an interest in competing for arms contracts in Manila, long dominated by the U.S.—and will visit Moscow on May 25th.  While Duterte famously had a poor relationship with former U.S. President Barack Obama, calling him a “son of a whore,” he appears more enthusiastic about Trump, whom he views as more of a kindred spirit, in terms of using salty language at least. Trump, for his part, surprised Washington by inviting Duterte to visit the White House, despite widespread criticism of human rights violations in his anti-drug campaign. Meanwhile, despite his stated interest in improving relations with Beijing, Duterte has begun building up the defenses on those islands in the South China Sea which the Philippines claims.

Previously, perceptions of U.S. economic and military pressure contributed to the deepening Sino-Russian partnership.  Under the Trump Administration, where every day promises a new domestic scandal or unexpected foreign policy initiative, Xi claimed after his meeting with Putin on the sidelines of the Belt and Road Initiative forum last week that China and Russia “have played the role of ‘ballast stone’ in safeguarding global peace and security.”

While U.S.-China-Russia relations have not changed as predicted (or as Trump intended) in the first few months of the new administration, this does not mean the current triangular dynamic is a stable one. The centrality for Trump of Chinese efforts to deter North Korea potentially holds the Sino-American relationship hostage to another mercurial figure, Kim Jong-un.  Should Chinese efforts fail, those in the Trump Administration who advocate for a tougher response to problems in Sino-American economic relations are poised to reassert their influence over the U.S. President. As much as great power relations have proven challenging, for the U.S., Russia, and China alike, managing relations with smaller states and their unpredictable leaders has proven equally daunting.

China-US-Russia RelationsKorean PeninsulaAsian Security
printTweet
You might also like
Back to Top
CHINA US Focus 2018 China-United States Exchange Foundation. All rights reserved. Disclaimer