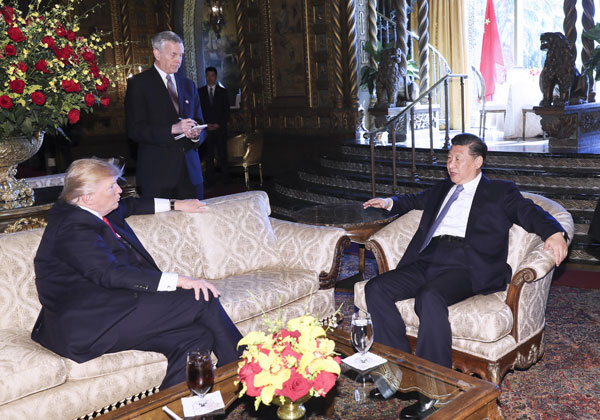 The Trump administration’s bullying and ignorant attitude on trade has been met coldly by Beijing. This should not come as a surprise to anyone, as Xi Jinping’s grand mantra is a ‘new type of great power relations,’ which involves mutual respect and cooperation. The apparent alternative is for the Chinese to wait Trump out and make a deal in three years with a (presumably) new American president. Despite the allure of such an approach, it would be a mistake to do so. Consider the following reasons.

First, despite all of Trump’s bluster about the trade deficit, which economists agree is neither as large nor as important as he makes it out to be, a potential trade deal with China deals with many other issues, like state-subsidies, intellectual property, and legal reciprocity. Dealing with these issues is in China’s best interest, and ostensibly Xi has already committed to do so in his promise to give the market a “decisive role” in China’s economy. There’s no reason China couldn’t use a deal with America as an excuse to further rationalize its economy and cast aside the training wheels which its state-owned enterprises (SOEs) are still using. This was what happened in China’s great wave of reform that preceded its entry into the World Trade Organization. Today, a new wave could be the impetus needed to stimulate China’s total factor productivity, which by one account, was what originally drove China’s high economic growth. So, in theory, a new trade deal with the U.S. is actually something China needs.

Second, Trump doesn’t play by the gentleman’s rules of the Marquess of Queensberry; there appear to be few holds barred in his playbook. Since China hasn’t given him the sort of trade deal that can enable him to brag about keeping his election promises, the Trump administration is increasingly compiling a list of ‘everything that’s wrong with China.’ Vice President Mike Pence’s recent address was only a taste of what is yet to come. This is much more troubling because it has the potential to seriously poison the overall relationship, not just in the remaining years of the Trump presidency, but for decades to follow. Trump has never shown interest in issues such as human rights or Taiwan’s independence, except as a means toward some larger end. This cannot be said of the actors currently conniving in the National Security Council (led by China-hawk John Bolton) to radically revisit the Taiwan status quo, or of the ideologically-driven senators who are hoping to apply the Magnitsky Act against CCP officials in Xinjiang Province. Both of these issues are unquestionably core interests for China’s leaders, yet both have the potential to enter the mainstream of American political discourse in a way that could destroy normal relations between the two countries. If this could be prevented by making a trade deal, giving American ideologues time to fixate on something else, then it is obvious that waiting risks more than just losing face or being unable to protect various special interests (such as SOEs).

Third, and finally, making a deal now would give Xi and Trump at minimum two years, and potentially six, to work constructively together to actually formulate a ‘new model of great power relations.’ Unlike many of his predecessors and virtually all of his potential successors, Trump is not the sort of ideologue who walks the halls of D.C.’s think tanks and for whom equality, respect, and reciprocity are bad words. Trump’s fresh and pragmatic positions on North Korea, and even South Korea, illustrate the potential for the U.S. and China to work together to transform elements of the international system positively, eliminating old rivalries and perhaps even enabling American troops to come home. This is clearly in China’s interest, and it could give President Xi the sort of high-level diplomatic triumph he seems to crave. At a minimum, it would turn the two countries’ increasingly negative-sum game back into a positive-sum one. More optimistically, it might reinvigorate the relationship in a way that could ensure another generation of peace.

It’s already too late to cement a deal before America’s midterm elections, so the G20 Summit at the end of November should become the focus. Any such deal will come with some short-term pain, but in terms of China’s long-term economic interests, its commitment to protecting core sovereignty issues, and its desire for a new type of great power relations, it would be well worth the sacrifice.

TaiwanXinjiangTrade War
printTweet
You might also like
Back to Top
CHINA US Focus 2022 China-United States Exchange Foundation. All rights reserved.