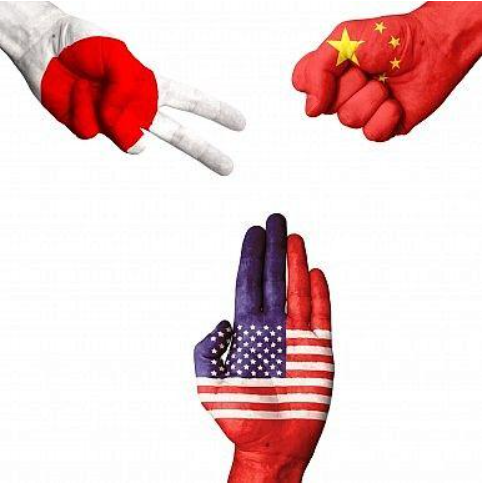 For China, the U.S. and Japan, the ideal option is to formulate a trilateral relationship that is basically stable, predominantly cooperative and relatively balanced. That was the case in the 1970s and 1980s. In most of the first two decades after the Cold War — and despite some ups and downs — cooperation remained the mainstream nature of the three-way relationship. Positive relations between China, the U.S. and Japan, the three countries with the greatest influence on East Asia, have had a significant impacts on the region’s peaceful development. But there has been a dangerous, reverse momentum lately.

First, China-U.S. and China-Japan relations are unusually tense and unstable. China-U.S. relations took a nosedive during the Trump presidency and deteriorated quickly. The speed downward has slowed somewhat since Joe Biden entered the White House, but the main trend has not changed.

China-Japan relations once returned to a track of normal development in 2018 after many years of worsening when then Prime Minister Shinzo Abe adopted some sort of hedging between China and the U.S., yet relations have again seen a serious slip-back.

In contrast to China’s relations with the U.S. and Japan, U.S. relations with Japan have been restored and strengthened under Biden. However, what will happen if Trump returns  with his signature “America first” agenda?

Second, American and Japanese cooperation with China has been in steady decline, which is particularly conspicuous in such areas as climate change, anti-pandemic, non-proliferation, nuclear safety, cross-border crime and global financial stability. Moreover, China-U.S. and China-Japan economic and trade cooperation has been weakened considerably, with scientific and technological cooperation being the most outstanding victim. However, it is impossible for the international community to effectively cope with the escalating global challenges without China-U.S.-Japan cooperation, and especially China-U.S., cooperation.

Third, the above two points have resulted in serious imbalance in the trilateral relationship. The basic pattern is the U.S. and Japan getting increasingly close, while China and the other two drift further apart, showing the dangerous trend of returning to the state they were in during the first half of the Cold War. At that time, China was under serious military threat from the U.S., while Japan was bound completely to the U.S. bandwagon and had no autonomy. The U.S. dominated East Asia. However, rocky trilateral relations brought conflict and war to the region, with the Korean War and Vietnam War being the most prominent examples.

Unless the status quo of trilateral ties can be changed soon, it will either seriously weaken the economic and security cooperation of the three countries — together with East Asia — and lead to arms races and a regional security dilemma. More seriously, it could lead to significant military crises, even regional military conflicts. The latter may not only result in the severe economic, scientific and technological decoupling of China from the U.S. and Japan but also revive the Cold War in East Asia. Japan may get greater autonomy than before, but this would only further complicate the dynamics of a new Cold War.

There are four main causes of the serious imbalance in the China-U.S.-Japan trilateral relationship:

• First, changes in the three countries’ comparative strengths. The U.S. and Japan have to this day refused to accept China’s peaceful rise, and strategic mutual trust has weakened dramatically all the way around.

• Second, deglobalization has been a new trend in recent years and mutual dependence between countries has been undermined tremendously. The global pandemic, which has persisted nearly three years, has worsened this trend.

• Third, while inheriting Trump’s policy of strategic competition with China, Biden has gone to great lengths to repair and enhance alliances and has engaged closely with Japan to confront China.

• Fourth, long-standing China-Japan territorial disputes, especially over Taiwan, have again come to the fore. As a result, dialogue between China and the two allies has dropped to a post-Cold War nadir.

How to change the status quo of the China-U.S.-Japan relationship, which is detrimental to the three countries themselves and to the region’s peace and development?

China opposes defining its relations with the U.S. in terms of strategic competition and is committed to developing a relationship featuring mutual respect, peaceful coexistence, mutual benefit and win-win cooperation.

Chinese academic circles have also proposed to reposition China-U.S. relations as “competition-cooperation-coexistence.” In their latest statement on America’s China policy, Biden and his team have made revisions to their “tripartition” approach, stated a commitment to the “Five Nos,” and shown a positive attitude to resuming dialogue with the Chinese side and cooperation on matters of common interests.

If the U.S. can match words with deeds, especially if it can first honor its promise not to support Taiwan independence, China and the U.S. may gradually resume and enhance dialogue, avoid conflict and confrontation, engage in benign competition and join in necessary cooperation. This way, after a long period of running in, China-U.S. relations may again edge toward stability and even improvement.

China wishes Japan would not side with the U.S., in which case China and Japan could build a relationship of friendly cooperation suitable for a new era. This is to a great extent consistent with Prime Minister Kishida’s proposal to develop a constructive, stable bilateral relationship that meets the demands of the new era.

To reorient the relationship toward stability and progress, however, the two sides should stick to the political foundation established in their four joint communiques. Diplomatically, they should resume and strengthen dialogue, especially at high levels. In security, they should genuinely enhance risk control and crisis management as well as collaboration on non-traditional security concerns.

One imperative task is to set up a hotline between the two countries’ defense agencies. Economically, they should work together to prevent global economic recession and push forward healthy globalization, while trying their best to preserve the foundation of bilateral economic and trade cooperation.

As to what sort of relationship the U.S. and Japan build, it’s mainly the two parties’ own business. The Chinese side only hopes that the U.S.-Japan alliance adopts defensive military and security policies, refrains from targeting third parties and interfering with other countries’ internal affairs, gradually reduces confrontational gestures, increases transparency and contributes to peace and stability — along with coping with non-traditional security factors in the region.

The Chinese side also wishes the U.S. and Japan would remain open to economic, scientific and technological cooperation. A policy of decoupling or semi-decoupling from China will eventually seriously undermine U.S. and Japanese interests.

Compared with China-U.S. and U.S.-Japan relations, China-Japan relations have undergone more ups and downs in the past 20 years, in step with a global power shift. One hopes the two sides can carefully draw lessons from history, take advantage of their cultural closeness, be first to stride over the so-called Thucydides trap and step and step up to build a new type of major-country relationship that is completely different from the one of the past. A success in China-Japan relations may have exemplary effects on future China-U.S. relations.

Developing a China-U.S.-Japan relationship that is generally stable, cooperative and relatively balanced is in all three countries’ interests and in the common interest of all countries in East Asia. This is a historic mission of far-reaching significance, and the three countries’ leaders — and all people of insight — should work together to make active, continuous efforts for its fulfillment.

China-U.S.-Japan RelationsRegional Security
printTweet
You might also like
Back to Top
CHINA US Focus 2023 China-United States Exchange Foundation. All rights reserved.