What Does Trump Want? 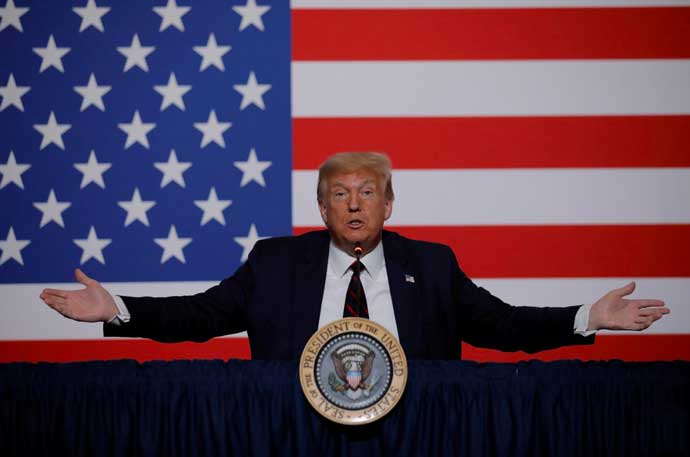 U.S. Secretary of State Mike Pompeo’s speech at the Richard Nixon Presidential Library and Museum on July 23 ratcheted up the hostility of the Trump administration’s China policy, as he explicitly identified the Communist Party of China as the target of U.S. rhetoric.

A day earlier, the U.S. abruptly ordered China to close its consulate in Houston, Texas, prompting the latter to retaliate by ordering the U.S. to close its consulate in Chengdu, Sichuan province. A very dangerous “spiral of confrontation” is evidently taking shape in China-U.S. relations, with some people talking about an unfolding “new cold war” between the countries. Others worry a hot one may occur.

Pompeo’s speech was a representative sample of the Trump administration’s recent rhetoric on China. Before the speech, Trump’s national security adviser Robert C. O’Brien, FBI director Christopher Wray, and Attorney General William P. Barr had already delivered corresponding speeches, playing up supposed threats from China and the CPC. At this carefully chosen location, Pompeo declared the administration’s intent to fundamentally change the U.S.-China relationship — legacies left behind by American political leaders of the generation of Nixon and Henry Kissinger — and abandon their engagement policy. Since Nixon was once called a “Cold War warrior,” Pompeo attempted to use Nixon’s name to suggest an endorsement for a chillier stance with China.

As the highest ranking U.S. diplomat, Pompeo devotes a great deal of his energy and time to attacking China and the Communist Party. Over the past few months such provocative rhetoric has gradually lost freshness — its purpose is to divide the Chinese people from the governing political party and to frame China as a rival to the so-called free world. As an article published in the Financial Times said, Pompeo’s remarks lack policy details and sound more like campaign speeches.

Playing the China card has become a core strategy of Trump and his campaign team. Attacking China helps distract the public from its dissatisfaction with the White House’s inadequate performance. On the day Pompeo gave his speech at the Nixon Library, COVID-19 infections in the U.S. surpassed 4 million, with deaths reaching over 140,000.

For campaign considerations, the White House has pressed states to reopen the economy, which has brought a second round of damage to the country. Unemployment is swelling in the U.S., and more than 30 million Americans will face food shortages. According to an estimate by the IMF, the U.S. economy will contract by 6.6 percent this year. Facing such bad news, Jared Kushner, Trump’s son-in-law who is actually running the campaign, believes attacking China is an important approach to rebuilding Trump’s voter base.

The White House is unilaterally launching a new cold war. Even though Trump himself is more concerned about re-election and economic issues, American hawks like Pompeo and Peter Navarro are determined to push China-U.S. relations onto a track of confrontation. First, they resort to all possible means to deepen economic and technological decoupling. Businesses from both countries are under unprecedented pressure from the U.S. government. Global supply and industrial chains are undergoing painful disintegration. And all of this is driven by the rhetoric of “national security” and “human rights.”

In order to accomplish its goals, the White House is recklessly introducing economic and financial sanctions even against companies from Western allies like Germany, inspiring dire predictions that the U.S. dollar will lose its global dominance.

Second, ideological hostility against China is rising dramatically in the U.S., even reaching to talk of regime change. As former CIA official Paul R. Pillar said, messianism requires that the U.S. be in a constant search for and demons to eliminate.

Further, American religious preferences give the rhetoric a patina of moral rectitude, which only encourages more demonizing of U.S. rivals. Former U.S. president Ronald Reagan called the Soviet Union an “evil empire,” and George W. Bush called Iraq, Iran and North Korea an “axis of evil.” Today, Pompeo the polemicist wants to shape the CPC in a similar mold — as an “evil” rival. The hostility is reinforced by the use of such black and white dichotomies as “freedom vs. tyranny.”

Third, the White House is striving to build an international bulwark to isolate and exclude China. The Trump administration believes the COVID-19 pandemic has resulted in increased dissatisfaction with China in many countries, especially America’s European allies, providing him with a rare opportunity to pressure these countries to pick sides. Both the Economic Prosperity Network and the Multilateral Actions on Sensitive Technologies policy position are being used to piece together the anticipated camp against China. Dangerously, the White House also hopes to further consolidate New Delhi’s hostility against Beijing, taking advantage of the recent China-India border conflict and locking the two countries, each with more than a billion people, on a path of confrontation.

From former U.S. National Security Adviser John Bolton’s new book, “The Room Where It Happened,” we can see how messy the decision-making is at the White House. The messages conveyed by the Trump administration continue to be confusing. On one hand, Pompeo expressed hope of changing Chinese policy behavior; on the other hand, he is suggesting the overthrow of the CPC’s ruling status. Oddly, Pompeo made a speech of undisguised hostility after Defense Secretary Mark Esper said he wished to visit China before the end of the year. Richard Haass, president of the Council on Foreign Relations, said that Pompeo’s attempt to distinguish China and the CPC will only escalate confrontation and make diplomacy impossible. But making diplomacy fail may actually be Pompeo’s goal.

No doubt the CPC is not perfect. As with all political parties and organizations, it needs to face the challenges of corruption and upgrade the efficacy of its governance. But Pompeo underestimated the Chinese public’s support for the CPC. After the end of the Cold War, the U.S. attempts to cause regime change in Afghanistan, Iraq, Libya and Syria have resulted in tremendous humanitarian disasters. Instead of living better lives, people in those countries found themselves drowning in massive population displacement, with shortages of basic necessities and the loss of sovereignty and dignity.

The Chinese people have seen this clearly and know that what China needs is incremental reform, not regime change. According to a survey conducted in May by the John F. Kennedy School of Government at Harvard University, more than 90 percent of Chinese respondents support their government.

China needs to wisely cope with the new offensives of people like Pompeo. They must avoid becoming an instrument the White House can use to manipulate public opinion. They must not fall into the trap of confrontation. An immediate imperative is to prevent intentional conflicts, which the extreme hawks in the U.S. may attempt to create in such areas as the South China Sea. Even though they think confrontation could help Trump’s chances for re-election, it may also sink China-U.S. relations into immeasurable disaster.